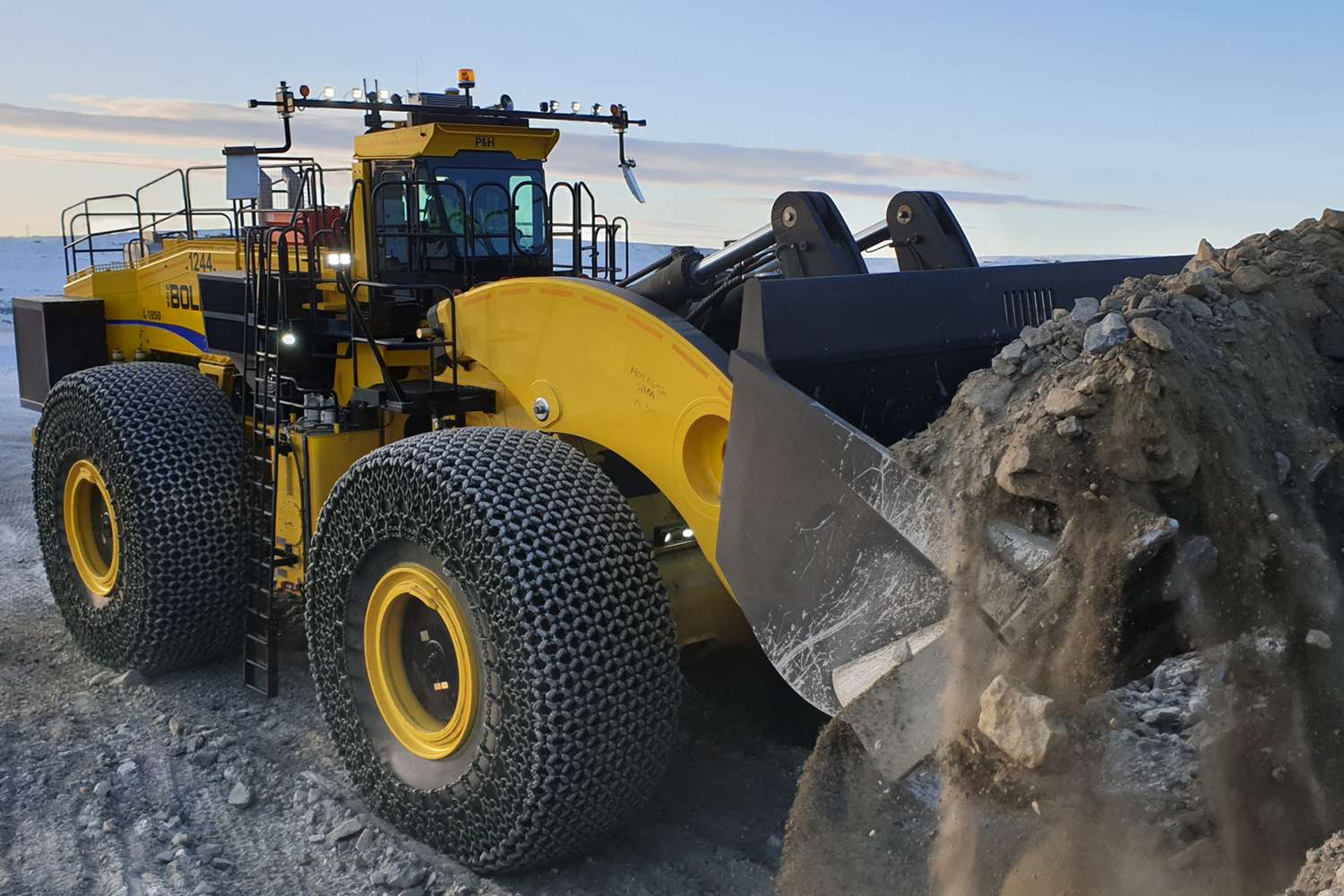 One of two new P&H L-series wheeled loaders recently commissioned at the Swedish Aitik copper mine, the other is an equally impressive 240-tonne/2,000hp L-1850. The flagships in the four-model Texas-built range, which includes the 1,900hp L-1350 and 1,250hp L-1150, big as the L-1850, the L-2350 is in a league of its own. Available with three configurations of lift arms; standard, high lift and super high lift, even the standard 270-tonne version is listed in the Guinness World Records.

Customers can choose from one of two 2,300hp Stage IV engines; a 16-cylinder Cummins QSK60 or a 12-pot MTU Detroit Diesel. Both Aitik’s versions have the Cummins block, and are believed to be the first in the world with SCR technology. Roughly 7.0m tall and wide, the overall length of the L-2350 with the 7.5m-wide bucket near the ground is over 20m and maximum height with it raised nearly 14m! Also, how many wheeled loaders can you think of with a catwalk around the outside of the cab.

The L-2350 is normally only found in the big mining continents of North and South America, South Africa, Asia and Australia, and the closest most Europeans ever get to seeing one in the flesh is at MINExpo where the second-generation machine was revealed in 2012.

The initial burning question of what the world’s largest wheeled loader is doing in Sweden is easily answered. The Boliden-owned mine is one of the few European operations that needs such large earthmovers, and the two new arrivals were bought to help ramp up copper ore production to 45 million tonnes a year.

Traditionally, the mine has relied on some of Cat’s largest machines. This currently includes a mix of 793D and 795ACF trucks, two D11 dozers, what we believe is the only 24m grader in Europe and a couple of 200-tonne 994 (18-cube buckets) wheeled loaders. To an outsider, the logical progression was to replace a couple of high-hour 994s with new K-series models, but it was P&H that clinched the deal.

The arrival of the two L-series wheeled loaders is perhaps not surprising when you consider Aitik is already a big Joy Global (owns P&H) customer and has the only 4100 electric rope shovels in Europe. This currently includes one each of a 1,250t 4100C and newer 1,500t 4100-XPC, the 46-cube bucket on both often scooping up 90-100 tonnes at a time.

The L-series wheeled loaders were added to the P&H portfolio when Joy Global acquired LeTourneau Technologies in 2011 to compliment the rope shovels. Something else that probably played a role is that Joy Global also owns Komatsu Mining, and as well as a couple of long-serving PC5500s, Aitik recently commissioned a PC7000.

In 2016, Boliden acquired the Kevitsa nickel-copper-gold mine in northern Finland, which operates the only 800-tonne PC8000 in Europe and a PC5500. Plus, it also has a 220-tonne Komatsu WA1200, the world’s largest fully mechanical wheeled loader. More recently, Boliden bought 26 new Komatsu diesel-electric trucks, a mix of 830Es and 930Es. Whatever the reasons, pictures of the first monster components of the L-1850 and L-2350 to arrive at the Swedish mine were quick to appear on social media at the back end of 2019. Assembled during the winter in the mine’s huge workshop, by early February 2020 both machines dug their first test scoops.

Operator training followed, and the L-1850 and L-2350 were ready for front line duty early March. I have visited Aitik on numerous occasions during the past 15 years and was once again kindly granted permission to head north to see the two new prime movers in action. It was not to be and the day before I was due to fly north, Boliden management took the precautionary decision to temporarily suspend all non-essential visitors at all its sites to minimise the risk of spreading the Corona virus. Fortunately, Aitik operator and good friend Joakim Norell agreed to take some pictures of the two diesel-electric wheeled loaders and share his initial impressions of both.

The amicable and knowledgeable Swede lives with his wife Jessica and five children; Alexander (22) who drives a contractor’s Volvo L-90 wheeled loader at Aitik, Hannah (18), Hilda (5), Loa (3) and Hillevi (1), a 15-min drive from Aitik in the iron ore mining town of Malmberget.

One of the Aitik’s longest serving operators, Joakim has been at the copper mine for much of his working life, and before joining the full-time Boliden payroll in 2005, spent many years working at the mine on smaller machines for local contractors. He has piloted all Aitik’s machines during the past 15 years, including ‘smaller’ Cat 980 and Volvo L180 wheeled loaders, but also all the big Cat trucks, PC5500s, P&H and Bucyrus electric rope shovels and 994 wheeled loaders.

Joakim enjoys the variety of not only getting to operate all the mine’s largest prime movers, but also graders, dozers and sometimes trucks. “They are all good in different ways and I like the variety,” he comments. He likes operating the PC5500s and P&H 4100s, but his favourite machine is the Bucyrus 495BII, a 1,300-tonne electric rope shovel that came to Aitik new in 2001. Passionate about all on and off-road machines, the best place to find the busy father when he is not working is on the ski slopes (he is also a qualified ski instructor) of the local Dundret mountain with his three youngest children!

Back to the machines, which are second nature to this well-seasoned operator, who also helps to train new drivers to operate the wheeled loaders and dozers.

The L-2350 is a couple of sizes larger than the Swedish mine’s 994H, although he reckons this size difference is not noticeable when sitting behind the controls. “The L-2350 doesn’t feel any different to a 994, although the steering angle (turning radius just under 20m) is lower and it needs more space to move around.”

From an operational point of view, the cabs and controls on the L-1850 and L-2350 are identical; joystick steering is also on the mine’s Cat 980, 982 and 994 and one of its Volvo 250H wheeled loaders. The main difference is that he uses his right foot to drive the L-s like a normal accelerator and his left foot the 994. Another is that the 994 is a purely mechanical wheeled loader, while the L-1850 and L-2350 are diesel-electric, with a generator bolted to the diesel engine supplying electricity to individual wheels motors.

P&H calls this the SR hybrid drive system. During braking or retarding, the electrical motors become generators feeding power back to the generator, which acts as a motor to power the engine and lower fuel consumption. Big as it is, average fuel consumption of the L-2350 is reported to be ‘just’ 160lit/hr. From an operator’s perspective, Joakim reckons one big difference between the mechanical and diesel electric loaders, is rear wheel slip on the L-s when digging. “This not possible on the mechanically driven Cat.” He likes the suspended seat in the L-series machines, which he describes as “really comfortable.” He is also impressed with the stability. “They are both very steady machines, and I am never afraid to move with a fully loaded bucket raised to maximum height.”

The cab on the L-series machines is a bit wider, and while the joysticks are smoother, he reckons the Cat controls are easier to work with. Two things he is not overly enthusiastic about in the cab department on both L-1850 and L-2350 are the cooling and heating fans. “They are so noisy it is difficult for me to listen to the engine. Without it, I think interior cab noise levels would have been quieter. As it is, the 994 is much quieter.”

Automatic bucket levelling is standard, and he likes the scroll function on the L-series to control the bucket, but he feels that the cab roof is too just a bit too low to be able to see it properly. This is not just an issue when trying to look up high in a heap of blasted rock, but also when the loader arms are fully raised loading a 795 or 930E. “I can see everything in the 994, which allows me to follow the bucket motions when loading into our high-sided trucks.”

The sun never rises for six weeks during the long and cold Arctic winter, when the 12 LED work lights (10 to the front and two at the rear) and access ladder lights are useful, although he confirms the lights on both L-s and 994s are good.

The L-2350’s fuel tank alone holds nearly 5,000 litres, and the engine cooling system nearly 500 litres. When all fluids and oils are lumped together, the L-2350 contain more than 7,500 litres! The combination of all these liquids is not good in the sub-zero temperatures, so both P&H wheeled loaders, like the rest of the mine’s machines, are fitted with the optional cold weather package. This includes a battery heater, engine oil and water heating system, grease reservoir heater and hydraulic oil tank heater.

It is still early days and the two wheeled loaders, which had a relatively easy time during their inaugural year, each one clocking up round 3,500 hours. Proud to have the world’s largest wheeled loader on the books, Aitik managers are now keen to find out whether they can work around-the-clock like the rest of its prime movers notching up 5,000-6,000 hours a year for many years to come.