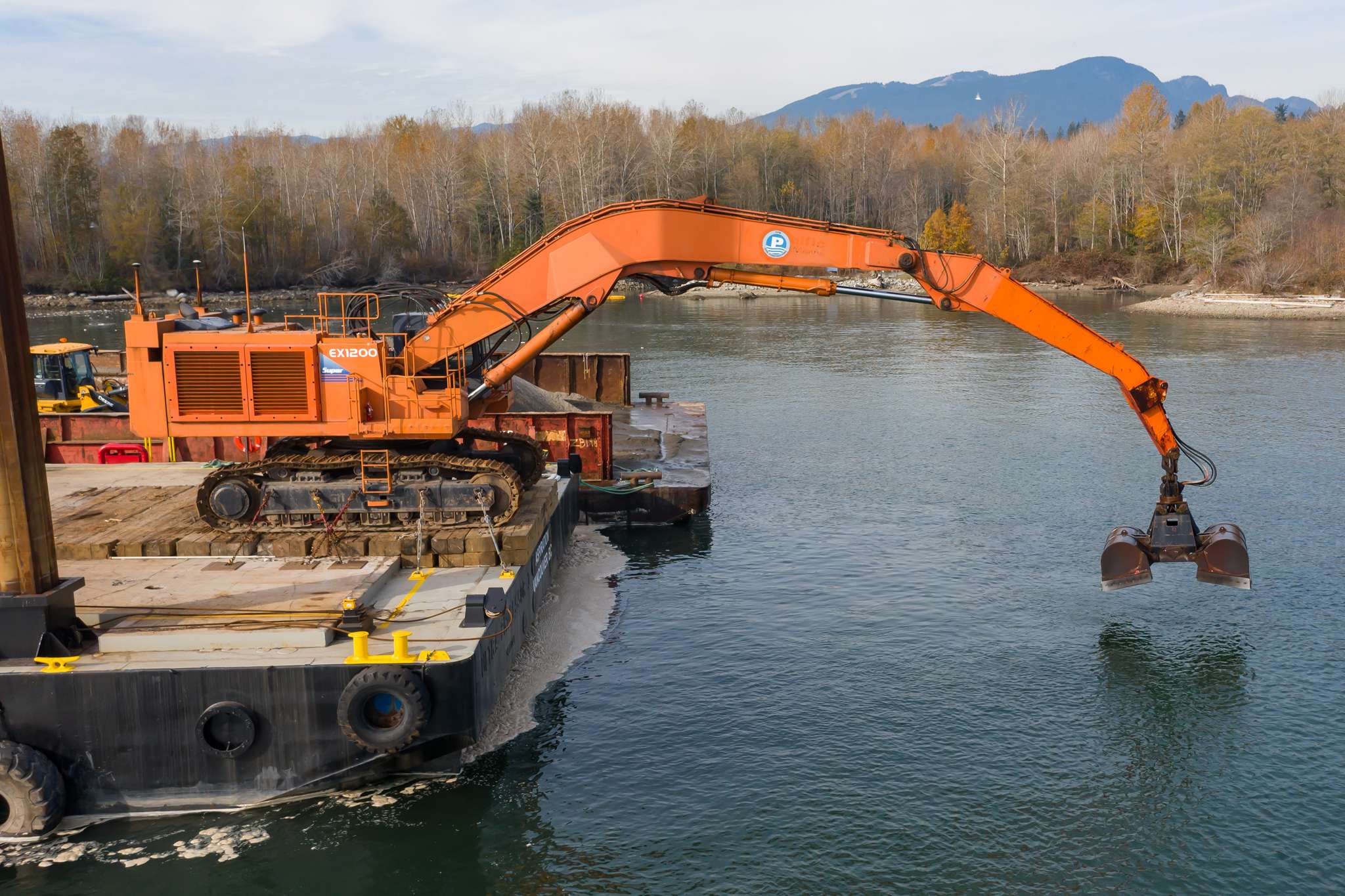 Burrard Inlet has been used by Indigenous groups since time immemorial. Captain George Vancouver and his shipmate Sir Harry Burrard in 1792 described Burrard inlet as a relatively shallow coastal fjord separating Vancouver from the North Shore mountains. The Inlet runs directly east from the Strait of Georgia all the way to Port Moody, B.C. It serves as a protected sanctuary from the open ocean, prime for aquatic habitat and port operations.

A CANADIAN ICON – THE BURRARD INLET

The Burrard Inlet is a portion of the nearly 16,000 hectares of water managed by the Vancouver Fraser Port Authority. Bordering 16 municipalities, the Port of Vancouver facilitates 29 major marine terminals, handling the most diversified range of cargo in North America including bulk, containers, automotive, cruises, raw materials like coal and potash, and liquid bulk. In fact, it is Canada’s largest port with 144 million metric tons of cargo throughput annually totalling approximately $240 billion in goods, which equates to $1 of every $3 of Canada’s trade outside of North America. Apart from the immense commerce presence in the Burrard Inlet, it is also host to a diverse range of aquatic species and provides a sanctuary for marine habitat.

Located on the North Shore of the Burrard inlet is the Maplewood Flats Conservation Area, a wildlife conservation area administered by Environment Canada and managed by the Wild Bird Trust of British Columbia. In the 1940’s the marine waterlot south of the upland was dredged to support sand and gravel operations, then later used as a log storage area for the thriving timber market in British Columbia. Fast forward to 2019, as a result of it’s industrial past, the Maplewood basin consisted of mostly low-value marine habitat for fish, and other limited aquatic species. The area was identified by Tsleil-Waututh Nation as a habitat restoration priority, so the port authority’s Habitat Enhancement Program planned and developed the Maplewood Marine Restoration Project. Canadian general contractor PPM Civil Constructors (PPMCC), was awarded the marine works construction contract for this project. PPMCC is a heavy civil and marine general contractor and subsidiary of Seattle-based construction company, Pacific Pile & Marine (PPM). Collectively, PPM and PPMCC have a vast portfolio in marine construction including structures such as coastal ports, terminals, breakwaters, and more with a combined reach spanning from Alaska to British Columbia all the way down the coast to California. This project is anticipated to enhance about 5 hectares of low value marine habitat into higher value marine habitat which will support juvenile fish, a variety of shellfish, crab, various kelp species and contribute to a variety of fish and wildlife in the basin.

PPMCC is regarded as an industry leader in safety and reliability. Kustaa Mansfield, Marketing Manager with PPMCC explains “The work we do is often highly specialized, requiring the right equipment – but in the end, the engine is always the people. We have a strong culture of getting to yes without compromising the safety of our workers. We are actively looking for ways to accomplish work more efficiently and cost effectively and most importantly more safely.” This project involved placing previously dredged Fraser River Sand to restore and raise the elevation of the basin floor. Starting in September 2019 and continuing to May 2020, approximately 230,000 cubic meters of imported and dredged material was placed to restore the Maplewood basin floor. PPMCC used a barge mounted Hitachi EX1200 excavator equipped with a Jewel articulating clam shell bucket. This equipment was suitable to navigate the shallow intertidal areas in order to access the Maplewood basin. In order to contain the placed material for the newly created intertidal and shallow subtidal areas, approximately 2,600 tonnes of 75mm diameter rock was placed to create a rock dyke. During placement of material in the Northeast basin, the barge mounted Hitachi EX1200 scooped material from an adjacent material barge, with barges swapped out as they emptied during optimal high tide timeframes. The main challenge on this project was the shallow southeast channel that provided the only access in and out of the worksite. This required precise co-ordination of barge movements and loading of the barges. Barges had to enter and exit the work site at very specific times, driven by tight tidal cycles. Jeremy McDermitt, Project Manager explained “This constraint had a flow down effect on when the barges were loaded, travel time between the loading location and site, as well as the crew schedule. The crew had to utilize the high tides therefore the schedule was completely dependent on when those high tides occurred”.

In order to accurately place material on the sea floor, PPMCC leverage a series of technologies before, during, and after construction. Initially, a Hydrographic Surveyor used a Norbit Integrated Wide Band Multibeam Sonar System affixed to a survey vessel along with an Applanix AP20 (Wavemaster) Inertial Navigation System with an RTK Correction feed from a Can-Net VRS system, to scan the seafloor. The hydrographic surveyor utilized Hypack/Hysweep Data Acquisition Software and AutoCAD Civil 3D drafting software to construct seafloor models which were uploaded to a software called Dredgepack. This Dredgepack software was fitted to the Hitachi EX1200 allowing the excavator operator to view the modelled seafloor surface on a LCD screen mounted in the cab, gauging how much material to place on the seafloor and precisely monitor progress of placed material. On the Hitachi EX1200 excavator, a combination of RTK GPS, boom and stick mounted eTrac sensors, and barge heading measurements enabled 3D location measurements to accurately place fill on seafloor. After material was placed in a particular area, progress surveys would verify the construction surface met the design tolerances and updated models would be produced. Without a capable software and RTK GPS, a project such as this would be incredibly challenging to predict fill required, and track material placement on the seafloor.

MARINE HABITAT FOR DECADES TO COME

The habitat enhanced by this project will be used to fulfil the fisheries habitat offsetting requirements for the Centerm Expansion Project, as approved by Fisheries and Oceans Canada. In the Maplewood basin, the newly created habitat will support a variety of shellfish, crab, and allow marine vegetation like eelgrass to establish. Eelgrass is important for juvenile fish, serving as refuge and nursery habitat. With marine works construction complete, plans to transplant eelgrass from selected eelgrass donor locations are underway. Overall, this project was a success for both the Vancouver Fraser Port Authority and PPMCC, by enhancing low value habitat into higher value marine habitat for use by fish, birds and other wildlife for decades to come.