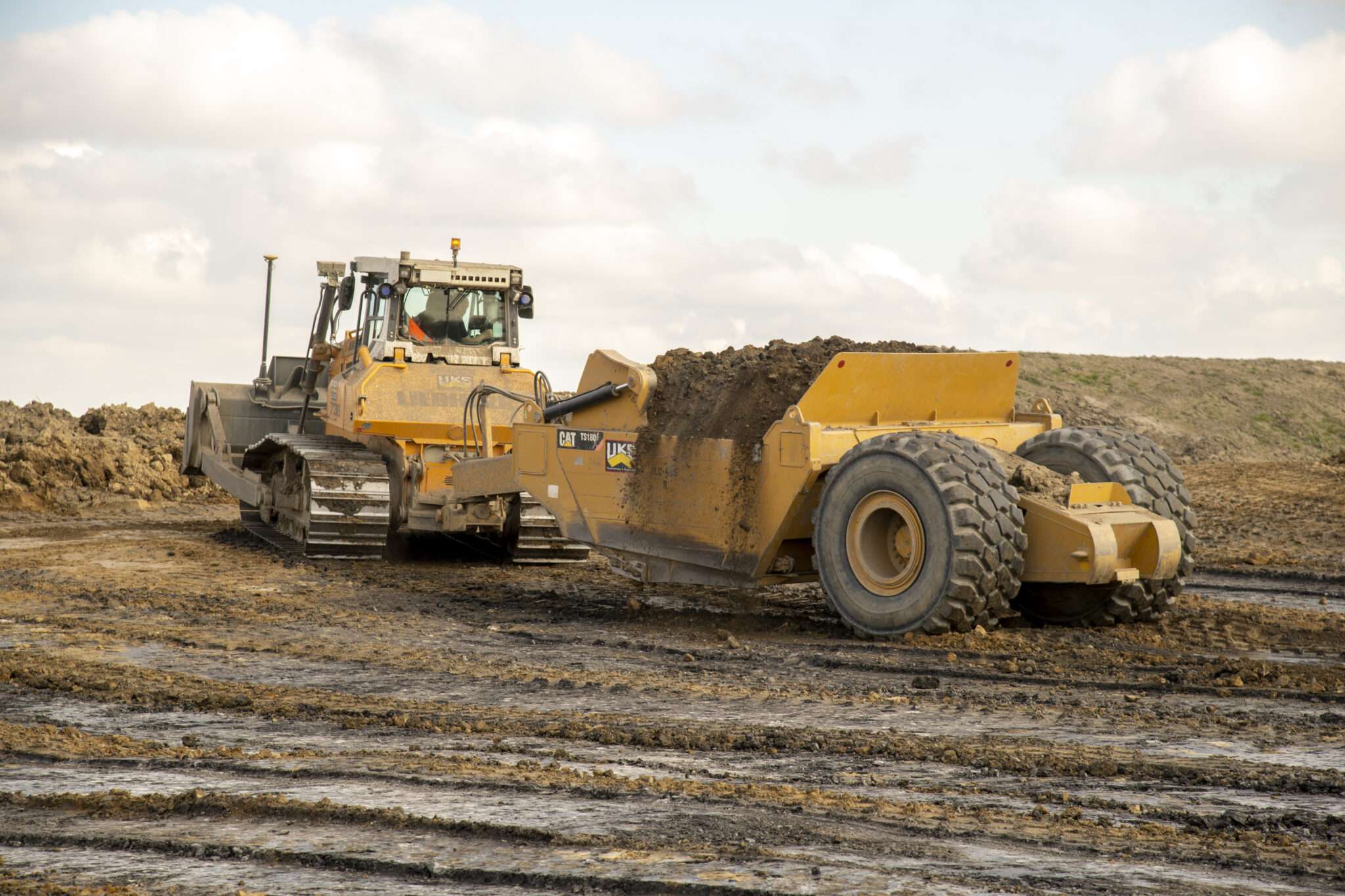 The UK muck shift scene has for many a year relied on excavators and dump trucks to undertake the bulk of earthmoving tasks. Whilst the last opencast coal mines still used the services of motor scraper and tractors and boxes, the use of these now classic muck shifting combinations almost died out. There was, however, a few stalwarts of the scene who knew the benefits, was capable of operating and maintain the machinery and had the confidence to keep what is seen as the cheapest way to move muck alive.

Whilst the use of motor scrapers has dwindled, traditional and modern design of towed boxes have been making a steady comeback.

We ventured up to Barnsley to see Nigel Thompson and his UK Scrapers team delivering a cost effective and accurate muck shifting solution for Howard Civil Engineering who were the principal contractor developing a new industrial park along with associated road improvements.

The former Rockingham opencast coal site had been completed for over 40 years but the legacy of the project, thousands of tonnes of former tip waste, had towered over Barnsley since the site’s restoration. The waste dump was totally safe and well compacted and proved to be of no danger to the local area. The need for suitable development space meant that the land was earmarked for planning with its owners Harworth Estates quickly drawing up plans to redevelop the site.

The original plan was to move the pit muck with a combination of excavators and dump trucks, but a wet winter of 2020 saw the project fall behind time. With a record of delivering tough sites on time and on budget, UK Scrapers were called in to assist in advancing the programme to deliver the project on time.

Nigel runs a fleet of Caterpillar TS180 boxes with a nominal 18m3 capacity towed either by Liebherr PR 736 Leica equipped dozers or two huge New Holland T9 tractors. The large section being worked by UK Scrapers is seen as an ideal spot for the use of this equipment. Short, downhill hauls mean the combinations require nothing but a bit of grunt to get a full box for the short run to the tip where the muck is laid out, levelled and compacted before being plate tested & surcharged in readiness for building on. “We’re very careful not to run when the ground is too wet.” Nigel explains “It’s far too easy to make a mess of the soils and spoil any work we have already done. Once the soils are removed and the proper pit muck exposed, we can cope with a little more in the way on inclement weather.” This statement is shown to be true with Howard’s own excavation teams shifting topsoil form a nearby bund unable to sit on the material as it is so wet.

Nigel is a stalwart Liebherr fan having started UK Scrapers with a single PR 734, a machine which was sold just last year with over 15,000 largely trouble-free hours on the clock. “It was a great machine and gave us that foothold back in the ‘tractor & box’ market that we required.” Whilst many traditionalists and sceptics will say that a motor scraper is quicker and many will say an excavator and dump truck is quicker, we would argue that the ‘tractor & box combo is by far the most efficient!. So, what are the benefits of these combinations? “We can work almost any muck out there.” Nigel points out “We have a single engine, single operator, we can dig the muck, haul the muck, dump and level the muck with millimetre accuracy thanks to our GPS capability. The Liebherr combinations are moving around 150m3 per hour on this job with a 70m cut, 250m haul and 50m tip area. The Cat boxes connect to the Liebherr tractors through a rigid drawbar, mated onto a purpose made towing hitch manufactured by Leeds based heavy metal fettlers, Northerntrack. Many detractors of this type of combination say there is excessive weight and wear on the drive train, but Nigel refutes this saying that the Liebherr’s have performed exceptionally well in this environment.

Many operators of towed scrapers remove the blades and draft arms to reduce front idler wear which works fine with dolly equipped scrapers, but we prefer to leave them on, not only to add balance to the machine, but this also gives the team the benefit of trimming up the cut or tip area whenever they need to.

With a pair of Liebherr’s on scraper work, Nigel’s own mount is the newest machine on the fleet, another PR 736 but this time the latest Generation 8 model. “I have to say that the original 736 was a massive step up from the old 734.” Nigel explains “This new Generation 8 version is another step up again. The cab layout has improved again and the pushing power and the way it is delivered has been refined again. I’m very, very happy with it.” Whilst the scrapers were doing their thing, Nigel was slot dozing material with his machine. The 5m3 folding PAT blade carries some material in front of it with consummate ease. Starting at the top of the cut and working about 100m downhill, the Liebherr just pushes and pushes. The hydrostatic transmission delivers high torque and low engine revs and drives the tractor along under all conditions. “It’s a great pusher with masses of power available.” Nigel comments “I wouldn’t swap it for anything else on the market. It’s giving us a fuel burn of around 22 litres per hour and that’s pushing hard.”

The final pieces of the UK Scrapers jigsaw are the New Holland’s. “They’re a big heavy tractor’s and can shift some muck in the right conditions.” Nigel comments. Nigel’s son George is the regular pilot of one of the T9’s and has graduated through the fleet to get this seat. “It’s a great thing to drive but you have to be so careful not to spin the tyres constantly.” George explains “It’s so quick over the ground too, I have to be steady loading the box but make up for it with the speed across the ground.” The Liebherr’s are currently piloted by Nigel’s brothers, Andy & John making this a real family business.

Nigel has spent time working out the cost savings made by running the scraper units compared to a now traditional excavator, two ADT and dozer operation and believes that on 2000 hours of operation per year, he can reduce fuel burn by almost 65% and therefore reduce the carbon footprint of his kit by almost 70% based on a 1200m3 per day muck shift.

Fuel plays a big part in any modern earthmoving job and Nigel believes he won’t get a more fuel-efficient tractor than the Liebherr. “The New Holland has 600 horses under the bonnet but still returns similar fuel burn figures to that of the smaller Liebherr dozers.” Nigel comments. A slightly larger Cat TS225 Box has just been imported form the US to run behind the former agricultural tractor as the TS180 is slightly too narrow to work well where the tractor is operating on tip edges. “The larger box will allow us to work to the tip edges but leave the tractor on the firmer ground away from the edge.” Nigel comments.

The job was also home to a friend of Nigel’s, Cheetham Hill’s Nick Howe. Nick and Nigel hadn’t worked together for a number of years and ended up on the job UK Scrapers were on previously at South Elmsall. Nick was contracted in with Cheetham Hill’s D10R to undertake rock ripping and dozing and it was at a break time they got into discussions over Cheetham Hill’s D10R and converted 631E scraper box assisting them on the job. Look out for a full report on Nick, Cheetham Hill and the D10R in the next issue of Awesome Earthmovers.

Watching the team at work, it’s easy to see why, in the right hands, scrapers are the most efficient way to move muck. It doesn’t look like they are shifting masses of material, but the steady and constant progress shows massively at the end of a shift.