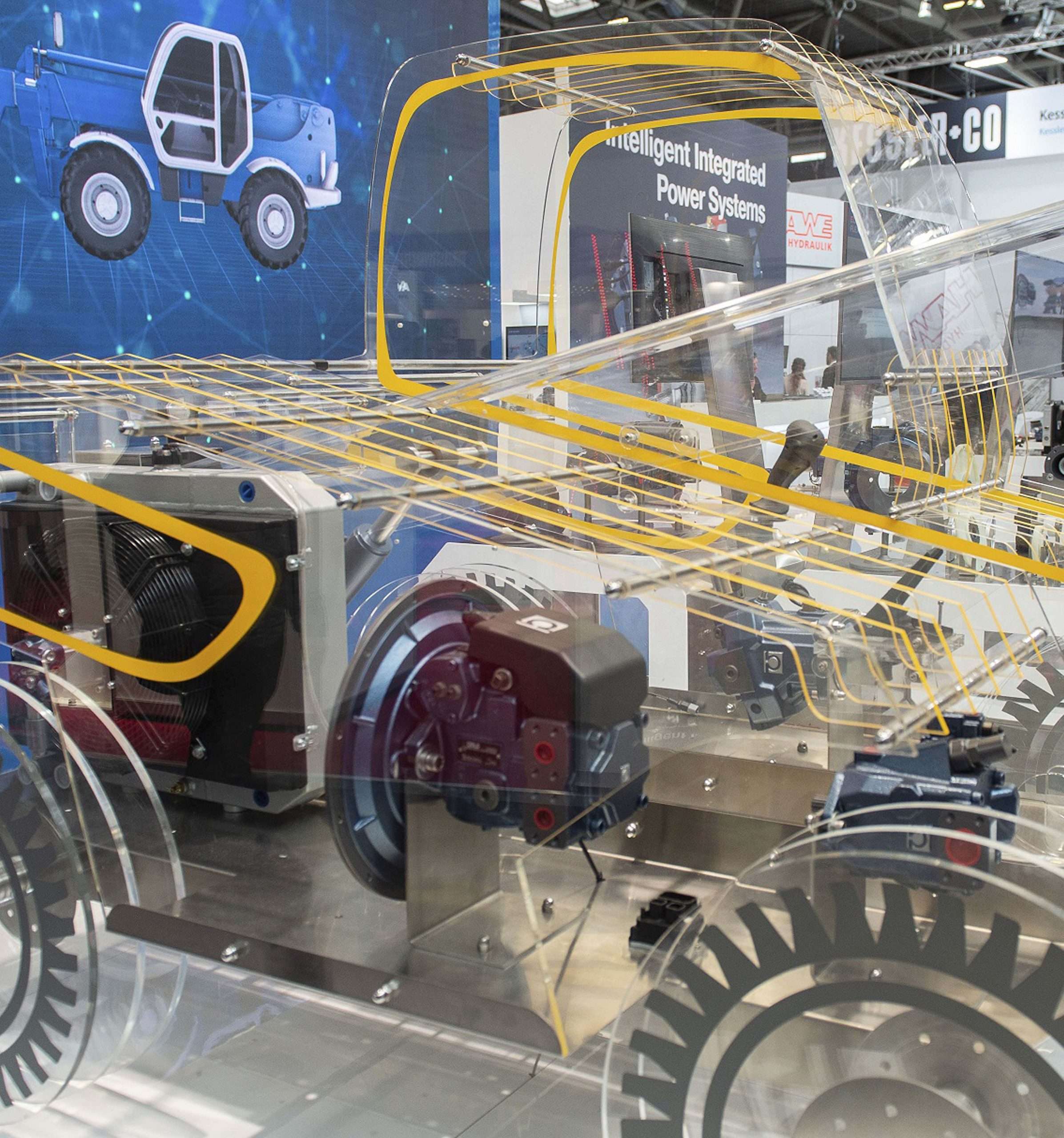 To reduce greenhouse gas emissions in keeping with climate protection goals, more and more construction machinery and vehicles are being developed with electric drives. Other advantages are also driving this trend. For example, elec- tric motors are quiet, which makes them suitable for use in low-noise areas – for example, near hospitals or at city construction sites. They also protect operators and the environment from exposure to direct exhaust fumes, making it possible for many work processes to be performed even in places with poor ventilation. Another benefit is that electric motors are regarded as low-maintenance and effi- cient, which means they ensure low operating and energy costs. So it makes sense that “The road to zero emissions” is also one of the key topics at this year’s bauma. Many exhibitors have already announced brand-new e-solutions for the fair.

These include the first battery-powered reversible vibratory plate with a direct drive. The APU3050e from manufacturer Wacker Neuson uses the proven hy- draulic adjustment system to change direction, just like in conventional models. With a working width of 50 cm and a centrifugal force of 30 kN, the machine is easy to control and has the lowest overall height of all reversible vibratory plates on the market, making it ideally suited for use in narrow trenches.

In the future, electrically driven tandem rollers can be the answer wherever zero- emission compaction is needed on a larger scale. Hamm AG will present eight models from the HD CompactLine series in their world premiere at bauma. They are powered by a maintenance-free lithium-ion battery with a capacity of around 23 kWh. In addition, the energy released by the traction and vibration motors during braking is used in recovery. The battery has enough capacity for an entire working day. The e-drive also significantly reduces noise emissions, making the e-tandem rollers suitable for all areas that require particularly quiet compaction. Because these settings also often require a low vibration load, the compaction specialist is introducing an electric combination roller with oscillation in addition to e-vibration and oscillation rollers.

The T7X, still in the concept phase, is the world’s first all-electric compact track loader. Its manufacturer, Bobcat, will use bauma to continue gathering customer feedback from different segments. Its aim is to be able to better assess market opportunities for the machine in Europe, the Middle East and Africa. With its 62- kWh lithium-ion battery pack, the T7X can operate continuously for four hours. Its mobile payload is just under 1,400 kg. In contrast to all other loaders world- wide, the new machine requires virtually no fluids: Bobcat has completely re- placed the traditional hydraulic system with an electric drive system comprising electric cylinders and electric drive motors. The only liquid in the machine is about four liters of environmentally friendly coolant.

Putzmeister envisions a future with all-electric concrete transport thanks to its iONTRON e-mixer. The vehicle’s battery has a capacity of 350 kWh, which means that one battery charge is enough for five to six trips in urban areas – usually sufficient for an entire workday. The vehicle can simply be recharged if more trips are planned. The mixer can recharge to full power overnight at a DC charging station. Its virtually silent operation enables unrestricted use even in lo- cations with strict noise regulations – a significant competitive advantage when it comes to bids in metropolitan areas. Rising prices for fossil fuels also make the e-drive an economical alternative.

The E-Pack from Tadano is an electrohydraulic system with an integrated 32 kW electric motor providing low-noise and emission-free crane operation. This solu- tion was presented at the last bauma in 2019. At that time, it was only available for a single crane vehicle. At the world’s leading trade fair this year, Tadano will show that, in the meantime, five of its AC cranes can be ordered with the E-Pack or existing cranes retrofitted with it.

The Japanese manufacturer will also offer a preview of the world’s first all-elec- tric rough terrain crane. The machine is currently in an advanced development phase and is scheduled for market launch at the end of 2023. It will be able to drive to and from the job site and perform all lifting there using only the energy supplied by its batteries.

Other exhibitors have already announced new e-machines, but want to wait for bauma to “let the cat out of the bag”. These include the successor model to the 5055e all-wheel drive electric wheel loader from Kramer-Werke GmbH. In addi- tion, the company promises a new electric telescopic loader – without revealing any further details right now. And that’s another reason why a visit to the Munich exhibition grounds in October is well worth your time.

You can find more information at https://bauma.de