Tilt & Rotate with the new 922f from LiuGong 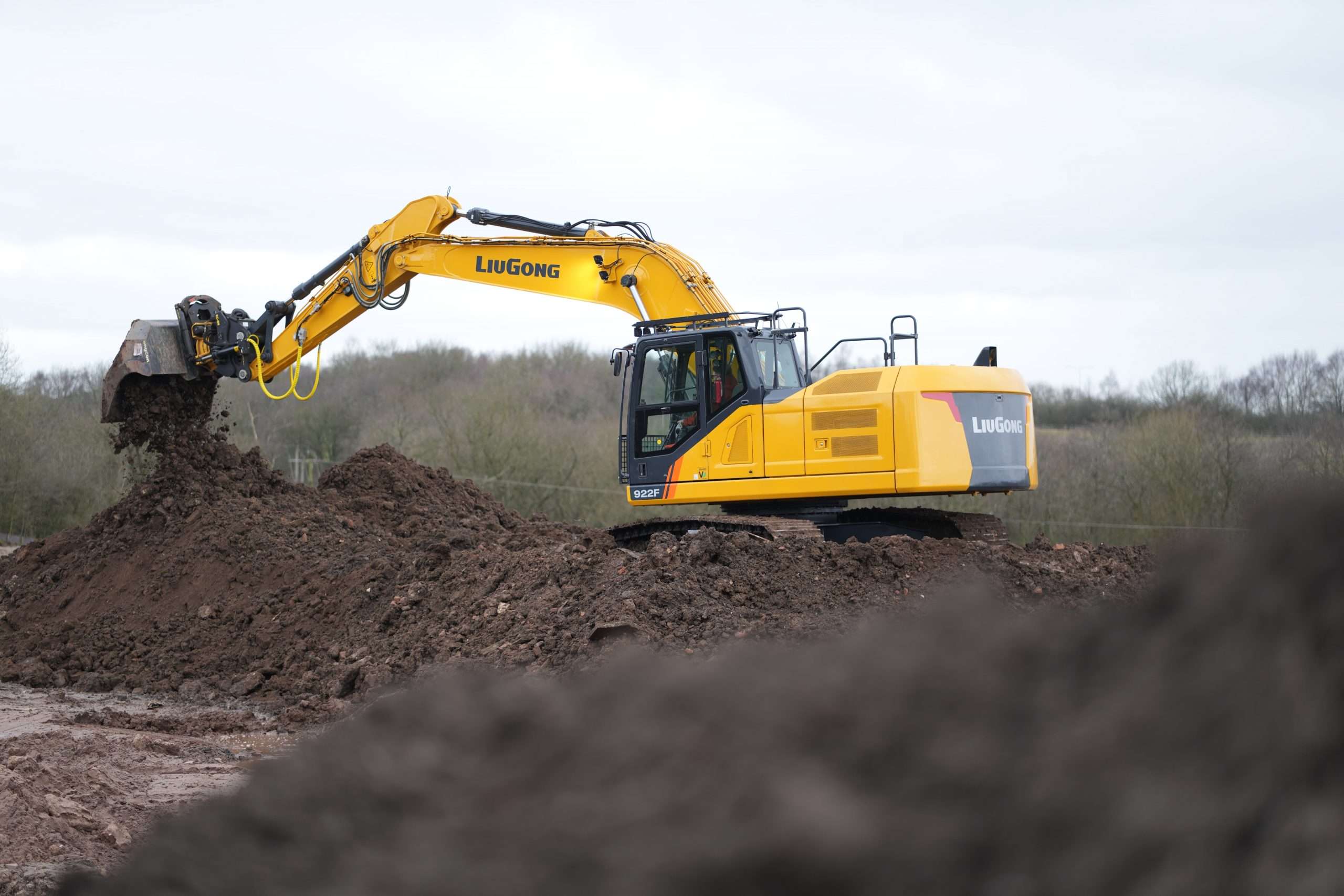 As one of the World’s largest producers of crawler excavators, LiuGong has continuously developed its product range to bring operator comfort, reliability, productivity, and economy to their machines. The latest F series range of excavators has not only transformed the look of the product but has also given the company the opportunity to bring in a huge range of technical advancements.

Awesome Earthmovers met up with LiuGong Europe’s Excavator Product Manager Harry Mellor in the UK where the company was putting a new 922F through its paces with one of their customers.

The LiuGong range of excavators has come a long way since their European launch less than a decade ago. Building on a solid foundation of continuous research and development, the company has steadily grown its dealerships, parts, and service back up along with an ever-growing list of companies happy and content with the reliable and productive equipment.

The latest F series of excavators are steadily making their way into European fleets with the 995F and smaller mini and 13/15-tonne models the first to be introduced. The popular 20/25-tonne range has recently been launched with the 922F already having significant numbers ordered and delivered as soon as they become available. “We have had some excellent feedback on the new F series.” Harry points out: “They are building on our reputation for a high quality and robust machine whilst reaching new levels of controllability and operator comfort.”

One of the first examples of the 922F in the UK was taking the brand a step further thanks to the integration of several features including plug and play for tilt rotators and machine control.

We met up with Harry, Ryan Page – LiuGong’s R&D specialist in the UK, and Social Media influencer Conor Kelly (conor_the_digger_driver) in Staffordshire to put the new excavator through its paces.

From the outside, the 922F looks far removed from the E series it replaces. Gone are the angular lines replaced with a curved upper structure topped off with a new far more spacious cab. The new-generation 22-tonne hydraulic excavator has been independently developed by LiuGong with the design coming from one of the most experienced designers in the industry – Gary Major. The sculpted upper structure has been designed to incorporate the former raised engine cover into the main shape of the excavator. The result is a smoother design with flowing lines and a far cleaner appearance. The cab has been totally redesigned to create a far more comfortable space for the operator. Larger than the previous E series cabin, the cab takes many of its design influences from modern car interiors with a less cluttered appearance, fewer switches, and a simple operator interface thanks to the 8-inch touch screen. The air-suspended seat now has the joystick pods attached to it so the operator can set the seat/joysticks to their personal preference with a multitude of positions available.

Heating and cooling in the cab have been improved thanks to the relocated vent outlets and the overall fit and finish of the interior resemble that of a high-end car or commercial vehicle as opposed to a construction machine. The joysticks are now spliced into the hydraulic system electrically removing any large intrusions into the cab helping to achieve a 100pa seal reducing noise transmission and dust ingress. This was something our test operator Conor Kelly thought was a big improvement over the machines he usually operates. The LCD screen integrates the usual machine information an operator requires through a simplified and easily navigable system. In addition to the standard information available, should the option box be ticked, the screen will also double up as the operator’s interface with 2D machine control options, a dig assist system to optimise job productivity and efficiency, and a payload system. The ‘intelligent’ machine will be available as a stand-alone machine with a standard machine still available to those who don’t want the full technology package. The standard 360-degree camera system is also found within the LCD screen and allows the operator to choose their favoured view from single-camera views to a bird’s eye view. It even allows you to look around the machine in 3D, just like the latest cars on the road.

The new 922F adopts a fully electronically controlled hydraulic system from Kawasaki and intelligent heat dissipation technology utilising six smaller fans as opposed the one large unit. “The fans can work in 3 combinations and at variable speeds to reduce the operating temperatures intelligently.” Harry explains: “An older style belt driven viscous fan would typically draw around 9kw when working at full speed which uses a larger amount of fuel compared to the smaller electrical versions we are now using. The smaller fans are more economical using only 0.6kw each when working at full power yet they still cool the machine just the right amount as and when it is needed. As the smaller fans are running less, they are quieter in operation compared to belt-driven fans.”

Our trial unit had been configured with an Engcon EC226 tilt rotator complete with ECOil and an integrated gripper unit. And despite the added weight hanging from the end of the dipper, the machine always remained steady even with poor underfoot conditions. Whilst the company says that it is offering a plug and play option for tilt rotators and machine control, the respective wiring looms need to be specified prior to the machine being built and allowing the option to be realised.

So, what is the new machine like to operate? As an experienced operator, Conor Kelly is in the right position to give his views on LiuGong’s latest offering. “I have to say, I’m very impressed with the cab, its layout, and its functionality.” Conor comments: “It takes a little while to get used to the electric over hydraulic joysticks, but once you are used to them, the machine is a responsive and smooth performer. I’m not the best on the tilt rotator, but it is very smooth and responds straight away to whatever I ask it to do.” Putting the excavator through several tests including grading stone and bulk muck shifting tested the machine in totally opposite limits with Conor reporting favourably on its ability. “It would be nice to have the machine for a couple of weeks to really put it through its paces under real-life site conditions, but in this short spell, it has impressed me. What has also impressed me is that all of the daily checkpoints are accessed from ground level which means I don’t have to climb up onto the top of the machine under any circumstances.” adds Conor.

With tilt rotator work out of the way, we were able to drop the Engcon off in seconds and change to a larger digging bucket to give Conor a spell at digging and casting some of the constant flow of inert materials entering the site. Sitting next to the site’s E series 922, Conor happily spread out the material in front of him. Despite soft ground underfoot, the 922F stood steady on the wet soil and even in power mode, we were able to hold a conversation without resorting to shouting at each other just a couple of metres away from the machine.

In conclusion, LiuGong seems to have produced one of their most important ranges yet. A machine that will make those with badge snobbery take a second look at. A machine that has all the gadgets and comfort to make an operator’s life more comfortable and one that is packed with technology to make it more productive and safer. Squeeze in the fact it runs a fuel-efficient and reliable Cummins drivetrain in a well-made package, we certainly think they are onto a winner with the F series.