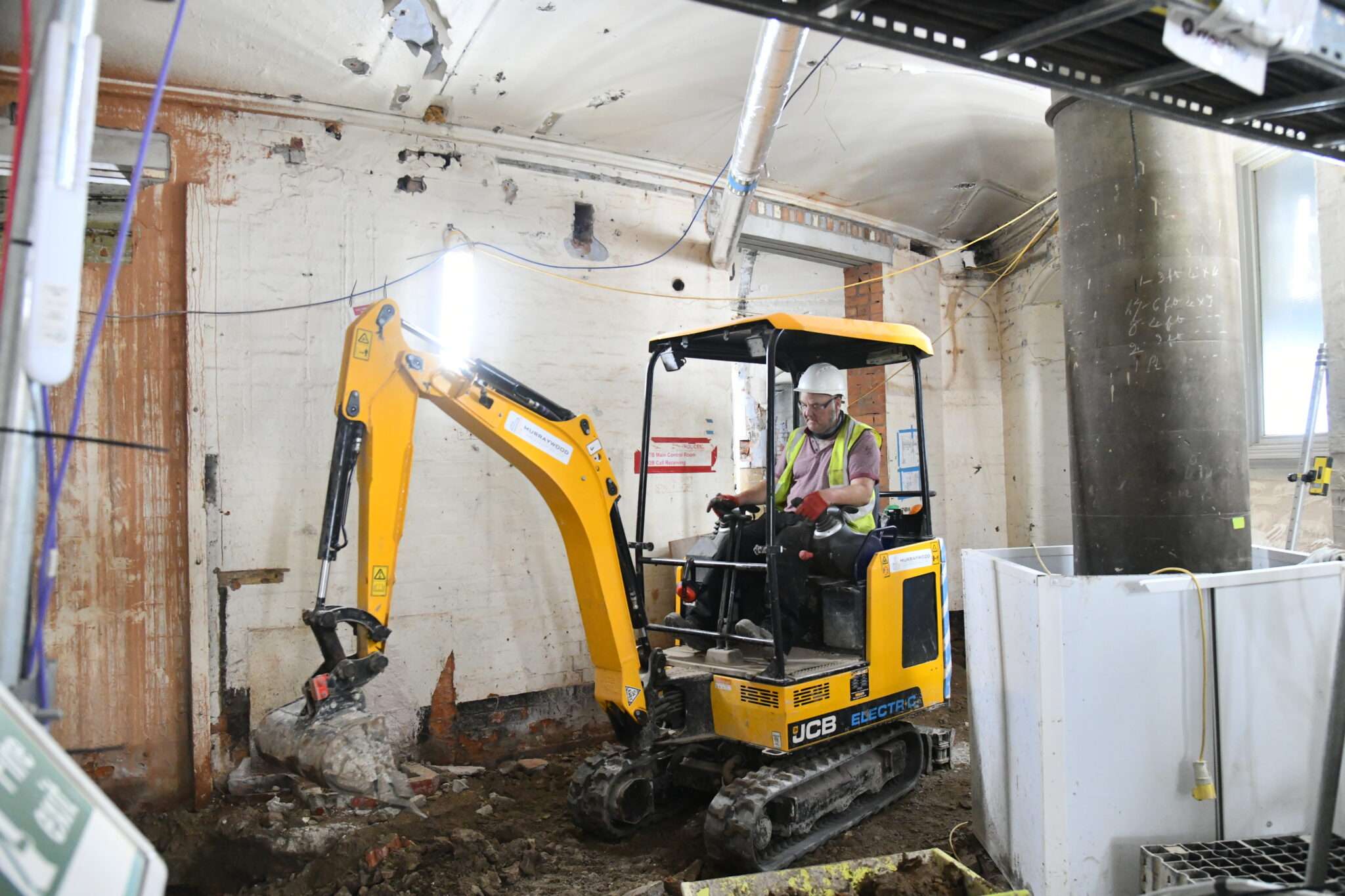 Manchester Town Hall sits right at the very heart of the city centre. The Grade 1 listed building – and its surrounds in Albert Square – has long been a place where the city gathers to celebrate, to honour its visitors or to mark great occasions. It’s also the place where people gather – at times – for great mourning.

The imposing exterior of this Victorian masterpiece was intended as a monument to Manchester’s success; the city’s rapid growth during the Industrial Revolution had led to the authorities at the time demanding a home befitting its new status. Renowned architect Alfred Waterhouse won the competition to design such a building. The foundation stone was laid on 26 October 1868 by the Mayor, Robert Neill, and the building opened with great fanfare in 1877. Mancunian swagger was very much the intention, to show the rest of the country – and the world – how great a place the city had become. Upon opening, a procession of some 40,000 tradesmen paraded past its doors: The Procession of the Trades, marked by the gift of a glass sword to The Corporation, as it was then known.

Inside, the grandeur continued. A grand entrance hall, granite spiral stairways made of stone from Scotland, Ireland and Wales, bells in the 280’ clock tower that were hauled up one by one through holes in the tower floors, a suitably grand Great Hall featuring 12 murals by Ford Madox Brown and 4000 square metres of beautiful mosaic floors, including the infamous Bees Landing – the worker bee was already a key part of the Manchester crest and identity.

Fast forward to the 21st century: fourteen decades at centre stage in the life of the city – and the nation – had taken their toll and, although the building had been maintained and was structurally sound, it was seriously showing its age. In 2017, following consultation with Heritage England and numerous other heritage and archaeological bodies, Manchester City Council committed to the refurbishment and partial restoration of the Town Hall and Albert Square, much of which was in urgent need of essential repair. The costs of the project were estimated at £330m.

Lendlease were the chosen contactor for the massive project with a scope of works including the largest scaffolding enclosure currently in the UK. As with many main contractors, their skills lie in the management of the overall contract with specialist subcontractors undertaking most of the works and this was the case when it came to awarding the specialist works to the sub-basement structures. The complex project of works included removal of existing walls (a mixture of load and non-load bearing), installation of new services trenches and ducting, the installation of openings and pits for new lift shafts, new drainage installations, removal, and reinstatement of new slabs with the excavation of over 2000m3 of muck. Whilst the scope of works doesn’t sound too imposing, all this had to be managed in a Grade One listed building with severely limited access points for both men, materials, and machinery.

The subcontractor winning the project worth more than £5,000,000 is Warrington based Murraywood Construction Ltd. Originally owned by Billy Murray and Tim Wood, the contractor is celebrating their 25th anniversary this year and are delighted to be part of the rejuvenation of the town hall.” Billy Murray comments “It’s an impressive building to be associated with and we are proud that we can say that we have worked on bringing it back to its former glory.”  Murraywood operate both as a main contractor and subcontractor mainly across the Northwest but will travel further afield for their growing list of high-profile clients. “We usually have 8 – 10 projects on the go at any one time.” Billy explains “I like to be hands on with the more technical jobs such as this one. This is more of a logistics project as we are having to work in small rooms and corridors and therefore have to ensure we can get materials in and out of the sub-basement for all of our operations to be able to proceed safely.”

Whilst a large amount of the Murraywood operations on site is labour intensive, there are large portions of the excavation and material movement works that Billy has looked at mechanising. “We have been asked to remove the existing floors throughout the basement and immediately looked at the possibility of electric excavators, electric wheelbarrows and a conveyor system where we could remove the spoil.” Billy commented; “The original thought of getting the spoil up to the ground floor through openings made for lift shafts via conveyors became too awkward so we had thought and had to look at other alternatives. We allocated a central point within the basement sending the conveyors (one in, one out) through two original window openings forming an external material handling point where spoil is removed on a conveyor, then processed for recycling or disposal, also with fresh material being fed on a second conveyor back into the sub-basement for use within the construction process.”

The excavation operations have been carried out in the main by an excavator purchased specifically for the job, a new JCB 19C-1E electric mini digger. “We have taken a couple of other electric minis on hire to cope with a push on operations, but we purchased this machine from our local dealer Gunn JCB to do the majority of the digging work.” Billy comments “We have diesel machines from other manufacturers but this 1.9 tonne excavator, I believe has the power of a three-tonne fossil fuelled machine. It is an awesome digger.” The 19C-1E is the first battery powered excavator in JCB’s growing range of green machines and has impressed the site team at the town hall.  The excavator’s regular operator Grenville Cook who has had ‘many years’ of excavator operating and said: “This is one of the best little machines I’ve operated. There’s no noise, no fumes and it just digs. It’s a typical, no frills machine but for anyone who wants performance in an environmentally friendly package, you won’t go wrong with this machine.” Billy comments: ”As the project demanded no combustion engines inside the building we wanted to make sure the program was met and that our operatives had an easier life. Instead of hand digging much of the material out, we went for electric. There is a significant cost implication on a purchase like this but when we looked into the figures of hiring such a machine as to what the purchase price was and the potential resale value, it was a clear decision to buy.”

Along with the JCB excavator, material movements have also been electrified with Murraywood purchasing half a dozen battery powered Truxta wheelbarrows. “We looked at electric dumpers with similar capacities at first.” Billy explains “But this would have meant putting a lot of lads through their dumper training tickets. We’re not adverse to advocating training at all, but when we looked closely at the job and its limitations, the dumper’s size was a barrier for us. The barrows are so simple and easy to use, and they go almost anywhere.” The JCB quickly loads a barrow with muck from one of the last floors to be lifted and it’s a little unnerving at the lack of noise coming from the excavator. That said, we can hold a conversation quite easily whilst standing next to the machine. The dreaded charge and capacity question that’s always thrown at battery powered vehicles inevitably arises. “We are running off a mains supply in here.” Billy explains “The lads are going on their morning break for 30 minutes and will stick the machine on charge. That will top it right up and they’ll do the same at lunch with it lasting the rest of the shift. It’s then charged overnight for the next day. We have never had any issues with running low on charge in the time we’ve had the excavator.”

The use of electric/battery vehicles is the next step in providing green solutions for his clients Billy explained: “As we replace our fossil fuelled machines, we replace them with ones capable of running on HVO fuels. We have to do our bit for the environment, and we hope just by this small change we can help a little.”

We were lucky enough to be shown around the whole sub-basement area by Billy. Looking at some of the work his team are turning out, it’s easy to see why they have made such a good impression with the Lendlease team. “As far as I’m concerned, we are all in this together.” Billy comments “We are all investing in a single goal and that’s to bring the town hall back to its former glory. We want to deliver this project to the total satisfaction of all parties involved in the project as do Lendlease and I think that is the only way that projects of this nature can be successfully completed and that’s through working together.”