The leap in electric drive technology for Collins Earthworks 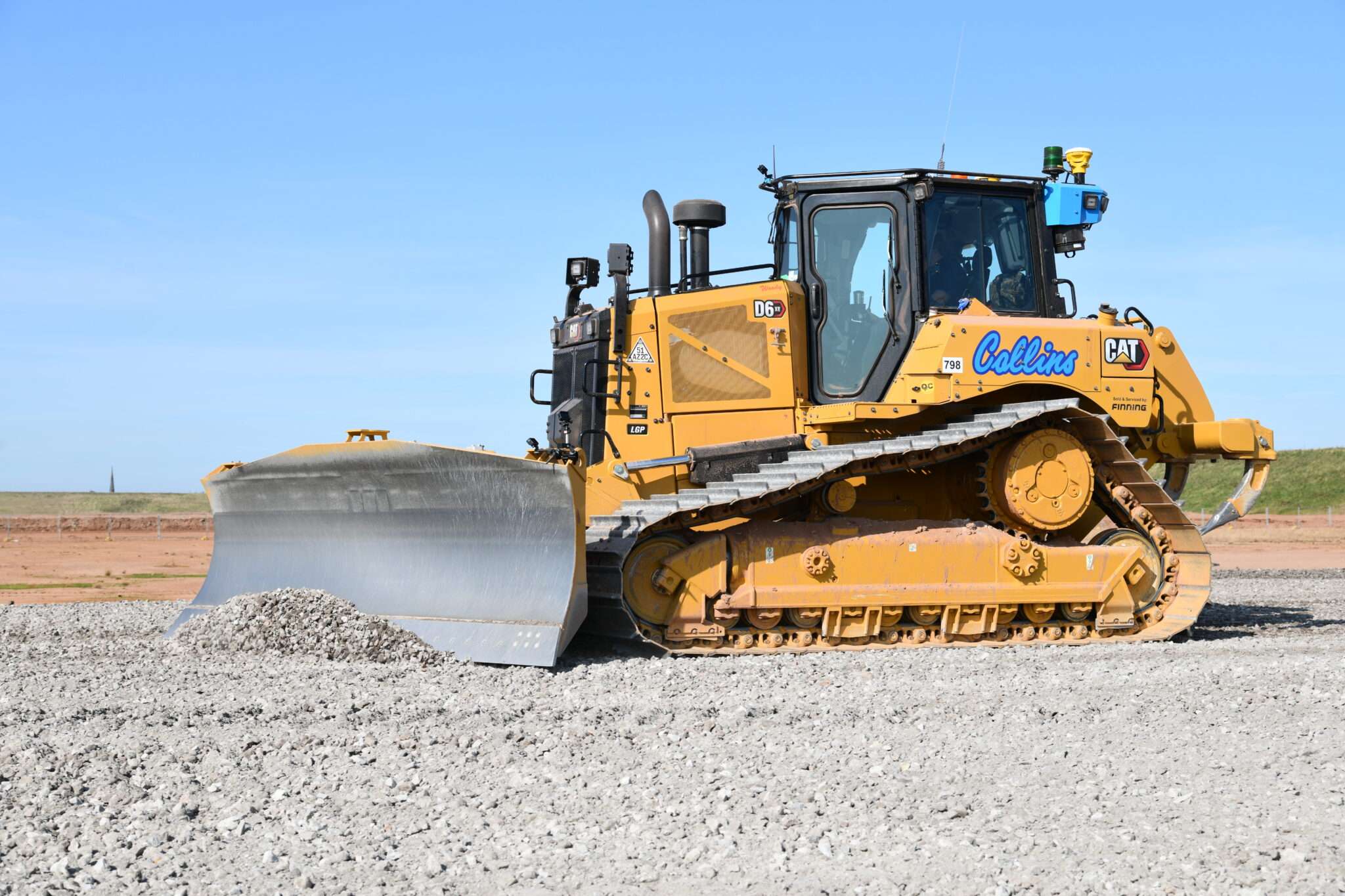 Caterpillar has been one of the leading lights in the field of reducing fuel consumption with the development of hybrid drive systems. 2010 saw the company launch the electric drive D7E, a development not repeated until last year with the launch of the D6XE.

2019 saw the company introduce the latest variants of their market leading D5 and D6 ranges, dropping the N and T prefix’s in favour of a reshuffle of models. The old D5N has now gone from the range with the D6N now called the D5 and the D6T is now simply called the D6. The D6 XE model combines upgraded technology from the D7E dozer which hit the UK over a decade ago. Whilst a productive and fuel-efficient machine, the D7E didn’t sell in great numbers due to their initial cost and size, the UK has never been a great user of this size of dozer.

We caught up with Caterpillar’s North American Marketing Manager for dozers Sam Meeker at Conexpo last year and he gave us the low-down on the new dozer: “The leap in electric drive technology over the last ten years has been massive, very similar in the way smart phone tech has jumped forward in the same space of time.” Sam stresses that the D7E was and still is a great dozer and with the refinements in technology, Caterpillar has been able to develop and perfect the system for high drive applications. Smaller motors and generators  with greater power capacities increase performance whilst decreasing heat produced, a common problem with electric drive machinery.

2020 saw the upgraded D6’s launch as a hybrid machine (XE) with the first model being sold to Nottinghamshire based specialists Collins. Already familiar with the Caterpillar dozer range, the company has taken the D6 XE into its fleet to evaluate the possible cost savings that Caterpillar has promised from the machine.

From the outside, there is little to distinguish the standard D6 from its hybrid brother. The new dozer had been deployed to a new section of works the company were undertaking at the huge East Midlands Gateway project where it had been handed to their most experienced dozer operator Dave Wood .

The main difference between the D6 and D6 XE is that the latter now sports an electric drive system which Caterpillar claims to offer reduced servicing costs of up to 12% with a reduction in fuel burn of 35%. The D6 XE is the world’s first high-drive electric drive dozer and hopes to carry on the success of the high drive design pioneered by the company almost half a century ago. With the electric drive system there are no gears to shift. All Dave has to do is just set the ground speed and the dozer automatically optimises the power output for the application. There is still a diesel engine hiding under the sloping bonnet to provide the power. The C9.3B engine is the latest generation of fuel-efficient, Stage V compliant motors from the Caterpillar stable and is linked to a 715-volt drive system of generator and single motor propulsion module. The generator and propulsion module are linked together via an inverter and control module with heavy-duty cables. The electric drive has over 90% fewer moving parts than its powershift counterpart which means reduced maintenance costs. There are now only 4 bearings which require replacing before 15,000 hours as opposed to the clutches, bearings and gears on a traditional powershift system. The D6XE’s inverter is now serviceable, something that wasn’t on the D7E. Where the D7E used an auxiliary power system for the water pump, air conditioning and charging the batteries. The D6XE has been simplified this part of the powertrain by using easy to replace belt-driven accessories. Caterpillar are so confident in the system that should any of the electrical side of the drive system fail within 20,000 hours or seven years, they will cover the cost on all parts and labour.

With all of the technology hidden, what is the main benefit for the introduction of an electric drive system for arguably the UK’s most popular dozer? According to Dave is it is the

phenomenal pushing power available from the electric drive. “Some of the ground is very dry and hard packed on this site but the dozer simply grunts and gets on with it.” Dave comments “You can get a little carried away as so far, I’ve found very little to stop it.”

Collins’s machine is equipped with an inside mounted C-frame carrying a V-Pat blade with a capacity of 4.1m3 and a rear mounted, three-shank ripper and sits on the new Finish Grade undercarriage option. This 10 bottom roller system gives a smoother grade at higher speeds improving efficiency even in the toughest of materials. Dave is complimentary of the cab upgrade on the new model. “It seems a lot larger than my old machine (D6T).” He comments “The seat has more adjustment and seems larger than the old one. An improved 10-inch touch screen mounted centrally in the dash allows Dave to tweak the tractor to his own requirements. The view from the seat is also massively improved thanks to the removal of the external FOPS frame which has now been integrated into the cab’s structure. “I’ve noticed that the engine is running at less rpm when I’m trimming up but still providing the same push and controllability.” Dave comments “The biggest difference is when I’m pushing heavier material, it digs in and keeps on pushing, I’m really impressed so far.”

The initial earthworks package for this next huge shed was almost completed when the dozer arrived but Dave was able to give it a full work out both undertaking the trimming of stone for the base of the new structure and earthmoving alongside one of the fleet’s Volvo excavators on the final muck shifting section.

Working alongside a D6T will have given the site an indication of fuel use between the two machines with Caterpillar claiming between a 9 and 12% fuel saving over the two dozers the D6 XE was tested against. Whether these figures will be realised in real time operations is yet to be seen. What can be confirmed is that Caterpillar are leading the field and the other manufacturers will have to play catch-up from now on.