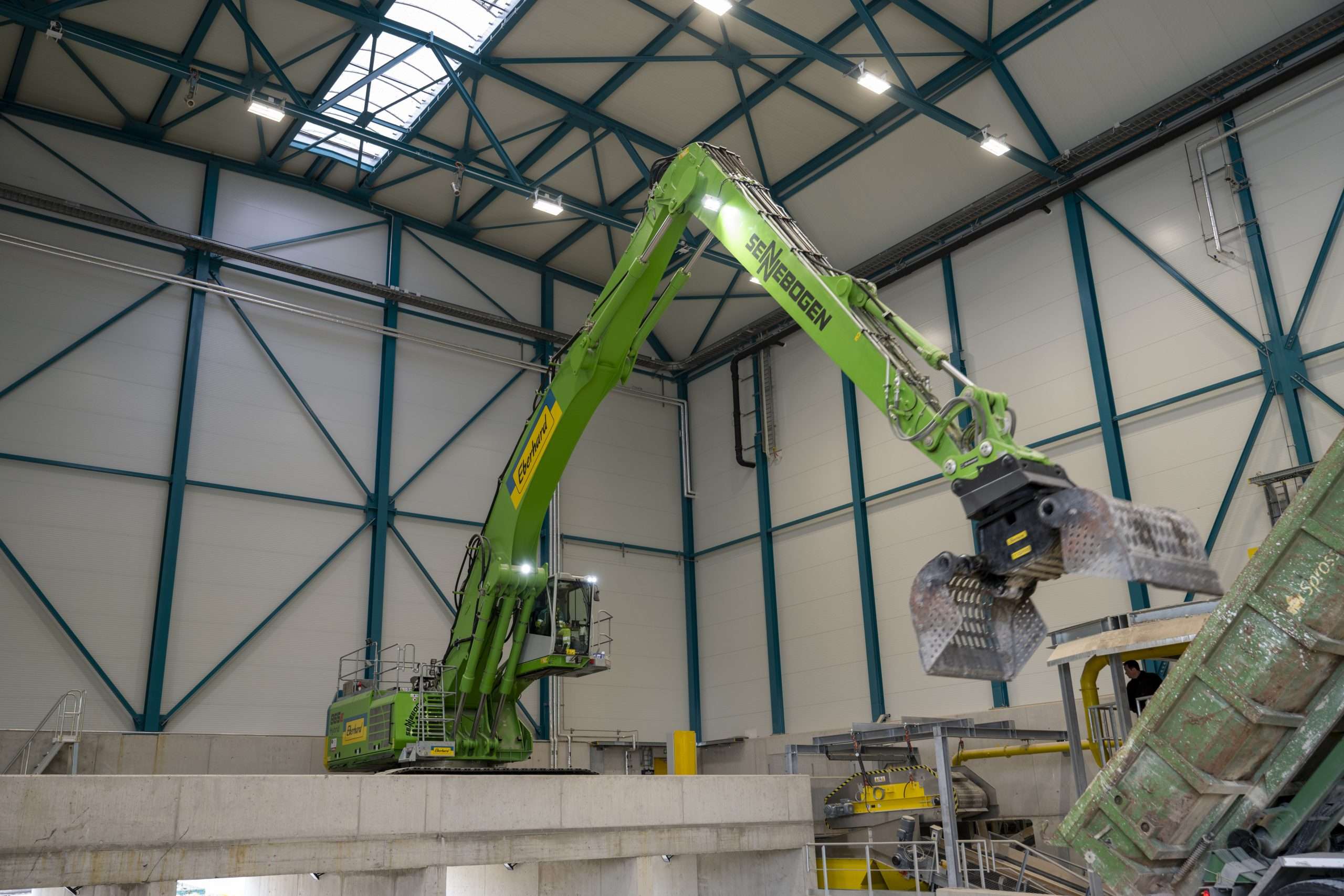 Having worked in the construction industry all my life, I was amazed at the diligence Eberhard have shown regarding their operating centre at Oberglatt. This is proven in the regimented attachment storage area that includes a rail mounted tower crane for the relocation of a variety of equipment.  It is also exhibited in the huge remote storage system more often found in a modern warehousing situation for picking small items.  The attention to detail the company has put into making the day-to-day running of the business so much easier is a delight to see.

This attentiveness also extends to their state-of-the-art aggregates and concrete laboratory where they test their ready mixed concrete batches along with developing new mixes with a variety of recycled aggregates. There has also been a recent huge investment into a brand-new recycling facility for mixed demolition waste. The company has developed what is believed to be a one-of-a-kind facility complete with a 100-tonne Sennebogen material handler.

Eberhard has a long and rich history associated with recycling and currently undertakes an ever-increasing volume of recycling works both associated to its own demolition and site clean-up projects and also those of outside contractors.

Founded in 1989, Eberhard Recycling AG has carried out some very complicated recycling operations including the full excavation and remediation of a former landfill site in Kölliken. This huge contract saw the excavation, segregation, and disposal of a range of hazardous materials previously buried to late 70s standards which resulted in the material leaching out into the adjoining water courses. The project saw highly detailed methods of unearthing the hazardous materials before transferring them to secure containers, which were then transported for further treatment or proper disposal. This involved converting all their equipment on site to have armour plated cabs to protect operators from potential explosions and pressurised cabs with constant clean airflow to keep out harmful fumes. Inside several purpose-built exploration vehicles on tracks, chemical specialists inspected the material being exposed on site.  Whilst this job has long been completed, three of the machines that worked on the project are now exhibits at the company’s Ebianum museum.

Moving forward to the modern-day and Eberhard has recently opened their new recycling facility EbiMIK designed to take mixed demolition waste.  The huge shed has been constructed with a large apron where incoming materials are tipped out. The large area holds several hundred tonnes of material allowing a huge, 93 t Sennebogen 865E Hybrid material handler to sift through the material and to remove anything which is non-compliant. The material handler is situated on a large, elevated platform giving the operator an unimpeded view across the material through the large Sennebogen Industrial MaxCab. The 865E Hybrid is one of the latest hybrid machines in Sennebogen’s large range of material handlers. Traditionally powered by a Cummins 261kW diesel engine, the 865E uses a 250kW electric motor to provide not only a clean operating environment, but also up to 50% reduction in operating costs as opposed to the standard diesel version. The large tipping area allows the incoming material to be sorted before it is fed into the recycling system.

The recycling hall is well lit, clean, immaculately presented, and comprises of a range of wide conveyor belts that carry the material towards a second shed where it is further sorted by six robots. Above the conveyors is where the magic is. Traditional picking lines use manual labour to remove products from the conveyor, the Eberhard system does away with any human intervention and relies on banks of optical sensors linked to mechanical grabs. Once the optical sensor picks up an unwanted product, the grab springs into action and picks the offending item from the conveyor and removes it to an appropriate bin for alternative recycling. The six robots can do up to 12,000 pick-ups per hour, 24 hours a day.

Once the material is segregated, it is crushed and screened before being stored in an adjacent shed. The material is then loaded into a hopper for further treatment in another hall by a Volvo L180H loading shovel. The finished products will be reused as first-class construction materials, resulting in the reduction in requirements for less virgin material to be sought.

Eberhard also has its own rail head in the yard which regularly transports materials in and out of the facility. Whilst the static material recycling plant is an impressive site, the company also offers a modular system for the removal of rail ballast with all of the components manufactured to fit inside a standard 20-foot ISO container.  It is then loaded together with several 20 feet containers (like the dust bag of your household vacuum, just much bigger…) onto railcars which the company operates.

The circular economy is very important to Eberhard. Since the turn of the century the company has sourced and supplied recycled materials for the construction of almost 100 buildings in the country, resulting in a drop in carbon impact for each project.