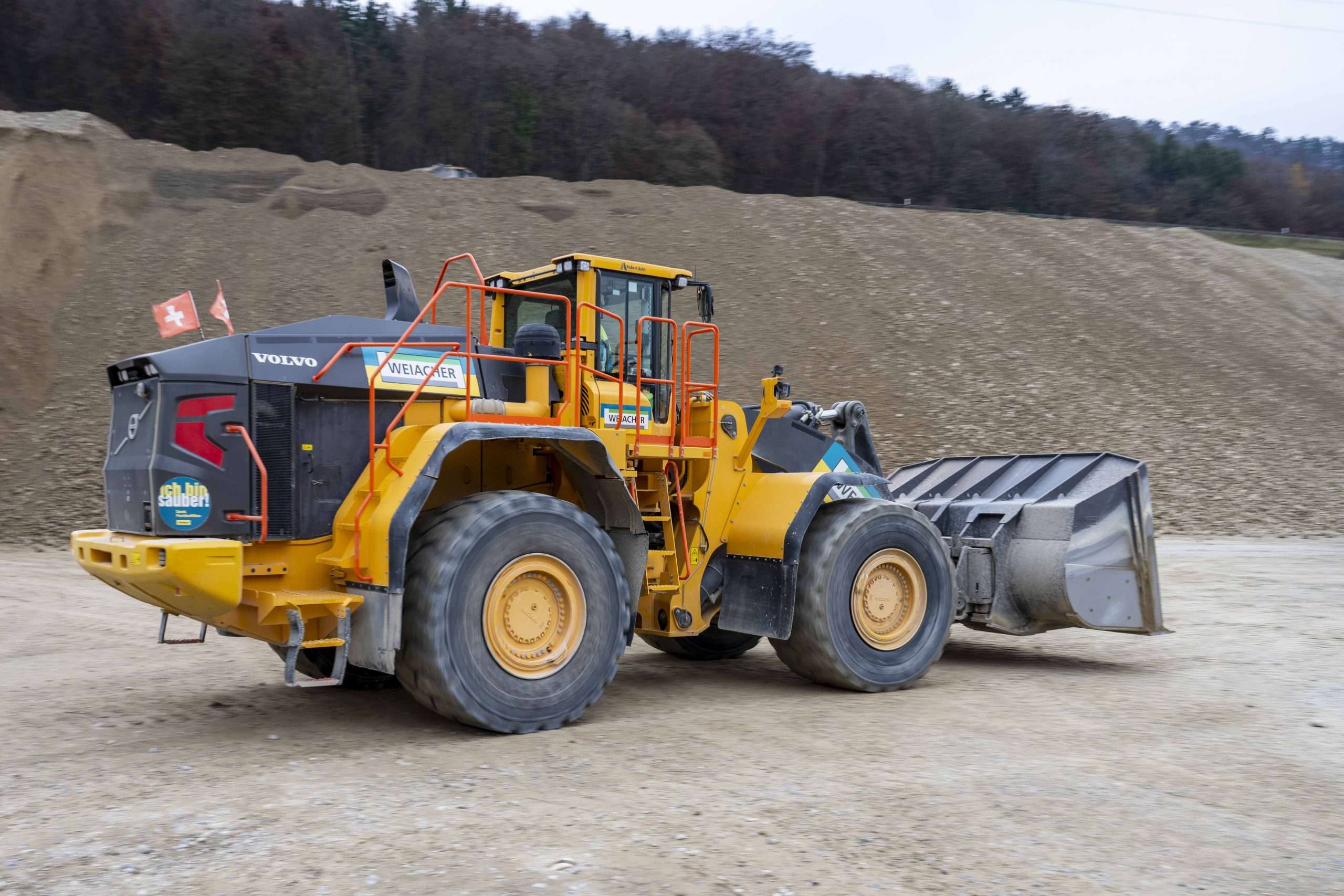 Swiss giants Eberhard are extremely busy across all sectors of the construction and recycling industries. Their demolition work provides them with copious amounts of material for their ready mixed concrete plant, but unfortunately, there is still a large requirement for virgin material to be used in construction.

On the outskirts of Weiach, some 30km north of Zurich, is Weiacher Kies AG, the gravel mining subsidiary of the company. Sitting on the southern bank of the Rhine, the 60 year old gravel pit produces high-quality sand and gravel products which are distributed across the country via road and from its own dedicated railhead. The pit had been previously owned by the Franz Haniel company as well as being under the control of multi-national mineral supplier LaFarge. Eberhard bought the gravel operation in 2009 and has turned its fortunes around to become a supplier of the much sought-after material. The entire site covers over 118 hectares with 43 hectares currently occupied by the mine. In recent years the company has landscaped over 50 hectares of the former pit.

The huge pit has a large fleet of dedicated equipment for the extraction of sand and gravel and is also capable of calling on the resources of the larger fleet of machinery owned by the Eberhard Group as and when they require additional machines.

The sand and gravel are extracted to a depth of almost 30m using a pair of loading shovels. Sourced from the Swiss Volvo dealer Robert Aebi AG and the Swiss Caterpillar dealer Avesco AG, Weiacher uses a 56-tonne L350H and a 55-tonne 988K XE equipped with 8.5m3 rehandling buckets mounted on a quick coupler adapter. These two loaders dig out the material pushed over the face by a Caterpillar D7E electric dozer. The oldest of the three D7Es at Weiacher has been recently rebuilt by Caterpillar dealer Avesco AG after amassing 12000 hours. While two dozers are busy on the landfills (clean earth fill and landfill for slightly contaminated material) one dozer works the top of the face pushing the gravel over the edge. Once the material drops, the loading shovels take it to the field hopper which transports it into the processing plant for crushing and screening via a large conveyor system. Working within 20m of the hopper allows the loader to keep a constant flow of material travelling to the plant. As the face gradually moves away, the hopper is relocated to stop the travel distance from increasing to an uneconomic distance. The two loaders share their gravel loading duties and are kept very busy on a daily basis moving material from the face into the hopper and have proved to be reliable machines and more than capable of undertaking this demanding task.

The Volvo shovel is powered by a 16 litre, 540 hp diesel driving through a Volvo HTE400 powershift transmission which gives a combination of powerful digging performance and fuel-efficient load and carry figures.

Like the Volvo, the Caterpillar carries a large 8.5m3 capacity rehandling bucket on a quick coupler. This versatility allows buckets to be swapped for maintenance whenever it is required. The XE loader is another of Caterpillar’s electric drive range and is designed to offer increased truck loading and load-and-carry efficiency. Claimed to increase efficiency by 25% overall and by up to 49% in face-loading applications, as compared to the 988K. During our visit, the 2019 loader spent its time loading material into a fleet of 35t capacity Volvo A35 articulated dump trucks. Just two passes from the CAT ensures the Volvos are fully loaded before they set off on the short distance to the tip area. The standard arm option for the 988K XE gives the loader a potential load over height of 5.5m, more than enough to load the Volvo trucks.

The environmentally friendly approach to mining is carried on through the three D7E dozers that work on site. These machines were Caterpillar’s first examples of electrically driven construction equipment away from the mining ranges. Whilst not solely driven by electric power, the hybrid combination is said to offer a large reduction in fuel burn along with a huge increase in the machine’s pushing ability. This is evident as the dozers push large amounts of gravel or landfill material with relative ease.

At the time of our visit, another Caterpillar machine was busy tidying up the top of the face at the current edge of the pit. The site has about a decade of operations left. As there are plenty of other areas to work on, the Weiacher team was busy putting a safe angle onto the face to prevent any material slippage over the next few years.

As this area involved working off a short bench, it was decided to use an excavator to undertake the work as opposed to one of the D7E dozers. Eberhard had supplied a Caterpillar 359E L excavator to undertake the work. 359E? I hear you ask. Yet again, to meet the demands of one of their contracts, Eberhard had taken a standard 349E and added additional counterweights, a heavy-duty 18m boom and dipper, OilQuick hitch, and a 2.7m3 tilting bucket.  These increased the machine’s weight to 59 tonnes and prompted Eberhard to change the machine’s designation.

Working from a single position on the bench, the machine’s operator was able to create the correct slope to the face thanks to the addition of the 3D Topcon machine control system. The material removed was then dropped down the face for the Volvo shovel to collect. Like almost all ‘general purpose’ excavators in the country, the 359E was equipped with a tilting bucket on the OilQuick. Sitting on a mechanically variable undercarriage with double grouser shoes, the 359E looked extremely stable, even at full reach, and only hinted at the rear track lifting when stretched out fully with a full and heavy bucket of gravel. With over 11000 hours on the clock, the 359E will be replaced by a brand new 352 LRE (second sold in Europe) in January 2022.

The mine currently has over 10 hectares of land left to work out which will potentially see a few more million tonnes of material removed and used in construction projects around Switzerland. Once completed, Eberhard will carry on the restoration project and return the land back to both farmland and nature reserve.