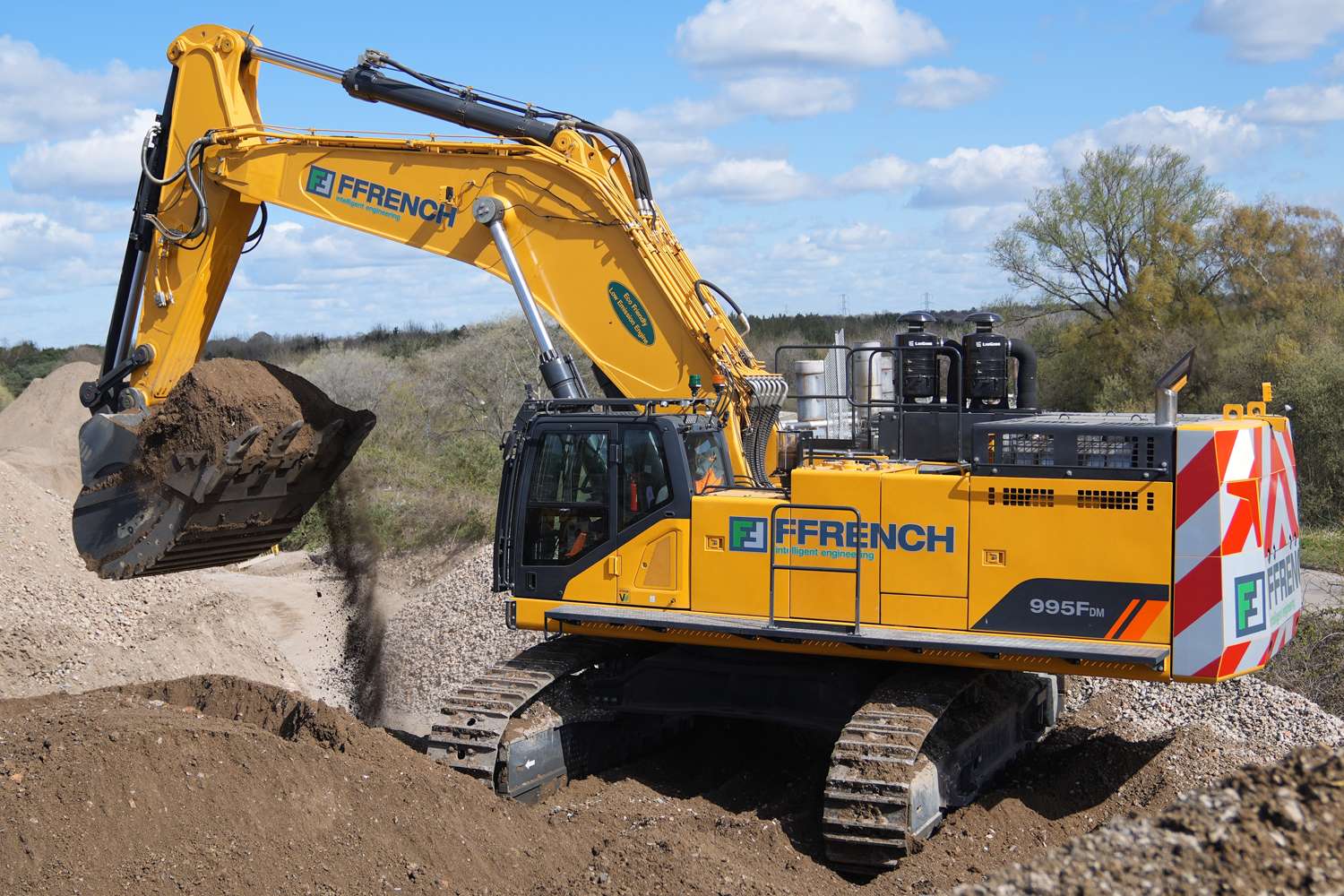 For contractors looking to add a 100-tonne class production excavator to their fleet, the list of manufacturers offering such a machine has just got a little longer.

Liugong, a leader in China’s construction equipment industry, has recently added their 995F excavator into their European range with the first example coming into the well-known fleet of Justin Ffrench.

Ffrench are no newcomers to the Liugong family having almost 50 machines already in their large fleet. They were quick to add the 93-tonne excavator their ranks as it meets with their drive to offer both the latest and greenest equipment to their clients. Working across the UK on both demolition and large muck shifting contracts, Ffrench have taken the 995F in the manufacturer’s demolition specification which adds heavy-duty belly plates, dipper stick and tipping link protection, auxiliary pipework with case drain line and a full ROPS and FOPS cab guard. There is also a heavier 14.8 tonne counterweight in lieu of the standard 12.6t version. The counterweight has also been decorated with a VLS reflective livery.

Liugong have built themselves a reputation in the UK for delivering excavators capable of withstanding the rigours of the demolition industry with many of the leading contractors using them within their fleets. This reputation hasn’t been left behind in the new F series flagship although driver comforts have been massively improved on within the new arrival.

“In the design of the F series machines, we wanted to get the feedback from our existing and potential customer base across the World.” Harry Mellor, European Product Manager for excavators explained “We have a good reputation within the UK demolition market but obviously wanted to target other sectors within the industry.”

The development of the 995F has seen the Chinese factory set a number of prototype machines to work in quarries and mines around China. Working 24/7 and amassing over 8000 operating hours, the prototypes returned to the factory suffering very little in the way of mechanical or build issues. This spurred the company on to launch the Tier5 variant into Europe with just the addition of emissions management hardware. “The mechanicals are identical to the prototypes.” Harry explains “We are very confident in both the build quality and the mechanical and electrical reliability of the machine after such positive testing.” Justin Ffrench is also very quick to praise the overall reliability of his existing machines saying they have been excellent in service and have performed reliably since he has added them to his fleet.

Whilst added to the fleet to undertake a variety of duties, the 995F looks the typical mass excavator thanks to its short boom and 2.9m dipper but with demolition work playing a major role in Ffrench’s operation, the ability to carry a new Shearcore FS95 shear was a must for Justin when it came to its purchase. “We have an 80t machine mass excavation spec and have enjoyed some success with this in carrying large demolition attachments. We’re not about reaching high with this machine; it will be for processing large material at lower levels.”

The new Kawasaki EH hydraulic system has been designed to provide both the required grunt for productive excavation, high flows and pressures for demolition work, but also give the finesse an operator requires to undertake lifting and grading work. “We were asked to deliver a machine capable of being a total all-rounder when it comes to the hydraulic system.” Harry commented “The EH system has been designed to deliver just this. From the electric joysticks, through to the pump and valve block, the system offers a combination of power and smoothness and response in all three operating modes.” The three modes; Eco, Standard and Power can be combined with altering the engine speed to allow almost infinite combinations in each mode. Together with a new lifting mode, allows the 995F to be good at everything the operator wants it to do.

Any issues with the cab on previous models have been totally addressed with the new F cab. Looking similar in styling to the X Series JCB cab (not a bad thing), thanks to its steeply sloping glazing on the door and side window, the operator has been handed a fresh, light and well-appointed environment in which to spend a shift. The most noticeable change is the seating arrangement which combines both the top of the range heated KAB seat and the joysticks into a single air suspended unit. This not only allows for a far superior ride but ensures the operator and joysticks can remain in constant contact with each other at all times. The left-hand joystick contains buttons for the horn, radio mute and proportional rollers for the attachment functions whilst the right-hand joystick has both proportional rollers and buttons for the track speed power boost function.

Behind the seat there is a storage compartment and fridge both of which are usefully sized rather than just fancy additions. Another huge improvement is the operator machine interface. An 8-inch colour touchscreen is situated to the right-hand side of the cab and allows such an easy interaction between the operator and the machine that first-time users can quickly set up the machine and monitor it exactly how they want to. “We wanted the system to be similar to that of a modern smart phone.” Harry explains. That it certainly is. Combined with a multi-function dial on the small and uncluttered dash under the operator’s right hand, the system has to be one of the easiest and simplest to use in any excavator on the market. The machine has a counterweight mounted camera as standard but Ffrench have opted for an additional Brigade 360-degree system to be fitted as this will allow it to operate on certain projects it is lined up for.