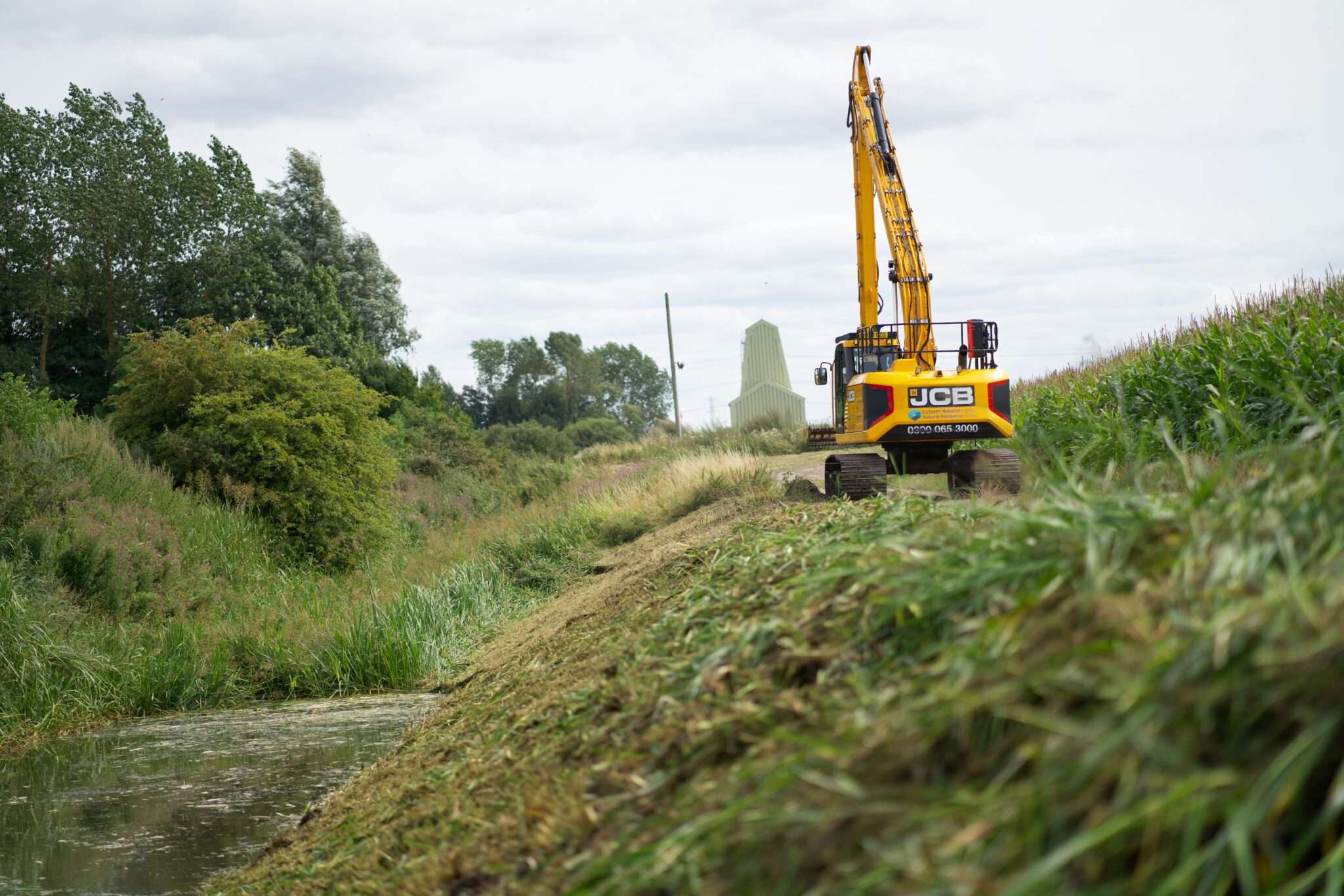 For the past two decades or so, the UK seems to have suffered from excessive rainfall causing extensive flooding and damage to properties. The call from the public for dredging of rivers and more robust flood defences has been met with arguments from environmentalists quite rightly saying that developments on and around flood plains and poor water management on new developments has attributed to these floods.

Natural Resources Wales (NRW) are the principal adviser to Welsh Government, and adviser to industry and the wider public about issues relating to the environment and its natural resources. Employing around 1900 staff including contractors, NRW operate the length and breadth of Wales with a number of strategically located bases supplying a variety of plant and machinery to undertake the diverse range of operations the agency carries out.

Two of the latest arrivals into the fleet are from British manufacturing giant JCB. One of the arrivals is a new JCB 220X complete with 15m long reach equipment designed to clean the countless inland waterways the agency takes care of, whilst the second machine a Hydradig 110W.

Team Supervisor for the North East workforce team is Leigh Brassey “Our team based at Holt near Wrexham has a workforce of 14 and looks after 50 km of waterways in a triangular area stretching along the English border in the East and from the Flint in the North as far South as Bala. These waterways include flood channels, rivers and drainage channels and ensure the team are kept busy with planned maintenance works all year round along with reactive maintenance, emergency call outs and maintaining various flood alleviation schemes. August through to March sees many of the river and drainage channels cleaned and maintained with construction works taking place throughout the remainder of the year.

The North East team have a variety of equipment at their disposal for the maintenance of their waterways as there is a diverse range of locations they need to access. “Whilst much of our work can involve reasonably remote locations and are ideal for the larger machines to operate, we have a number of large towns along the cost and further inland where smaller plant is required to access some of the tighter spots we have to navigate.” Leigh comments.

The wide variety of work the teams undertake includes ditch cleaning and maintenance, tree pollarding and a variety of construction works all designed to keep watercourses free flowing.

AWESOME EARTHMOVERS met up with Leigh and two of his team Cyril Youens and Ian Piggott on one of their annual projects right on the edge of their territory on Deeside Industrial Estate. The team were underway with the embankment cutting and clearance of over 4 miles of drainage channels constructed to ensure the adjacent industrial estate stays above water. Cyril has over 45 years of service with NRW and its predecessors and remembers the entire drainage system in this area being reshaped and stone lined in the mid 1980’s. “We lined the ditches with stone over a layer of membrane to ensure they didn’t get silted up.” Cyril comments “It has kept the ditches that were done almost 100% silt free for over thirty years and makes the annual cleaning of them far easier with just weeds to remove.” Leigh has also been with the NRW for just over 20 years as has Ian with both of them following in their father’s footsteps. “We don’t have many leavers from the company.” Leigh comments.

The Deeside project usually lasts a couple of months with Ian mowing the banks ahead of Cyril who follows on cleaning the channels out. This season has seen the latest machinery arrivals at the Holt depot being used on the project. Replacing a Case wheeled excavator, Ian had been handed the keys to the new JCB 110W Hydradig and with the help of a new C4 flail mower quickly covered the ground undertaking three passes of the bank reducing the grass down to a just a couple of inches in height. The three passes reveal the cusp of the bank and allows Cyril to gauge his work precisely. Working over the side of the Hydradig, with the axles locked, Ian works to the full reach of the machine with relative ease. With the flail head set he simply drives the Hydradig down the stone path adjacent to the drainage channel cutting the grass as he goes. “I’m still getting used to it.”Ian explains “But after just a week or so on it, it seems to be a very well balanced and capable machine. I really like the fact that the weight is low down, and we have no tail swing on it.”

The Hydradig has many plaudits for its superior visibility from the seat and this is an area Ian very much likes. “It is a nice cab, really comfortable and has a decent turn of speed on the road, although it does die off a little on hills.” Ian comments. The undercarriage has been specified with a set of stabilisers and a blade which can be equipped with a tow bar. “We would like to have been able to get a trailer for it and carry our attachments around.” Both Leigh and Ian said “But the current legislation won’t let us do that. It would have been great for any emergency works we get called out to; we could be almost a self-contained emergency call out vehicle.”

The 220XLR on the other hand is a dedicated long reach machine straight off the production line at Rocester. Cyril has operated long reach JCB excavators before with his previous employers having the 814 and 820 Super Powerslide models. The new 220X is far removed from these machines with Cyril saying the machine a great tool for the job. The 15m reach machine has been equipped with an Engineering Hire mowing bucket. Operated from the machine’s hydraulic system, the moving cutting edge on the bucket easily slices off the reeds and weeds at the bottom of the channel before Cyril windrows them up on the top of the bank. “They will rot down in a couple of weeks.” Leigh comments “It’s very rare we take anything off site and will endeavour to leave the vegetation rot in the same location as it was removed from. We do come across some issues when we clean out some of the urban drainage channels such as trolleys, bikes and general rubbish. We have to dispose of anything like this responsibly.”

The 220X and Hydradig are both powered by JCB’s own powerplants. A 448 Dieselmax sits in the 24 tonne 220X delivering 173hp with a smaller Ecomax 444 pushing out 109hp, powering the Hydradig. The 220X has been in service for almost 12 months whilst the Hydradig has just 6 months operations under its belt. Both machines have been very reliable according to Leigh; “The lads like them, they are doing exactly what we expect them to do, and the fuel consumption is very good. We cannot fault them at all.” NRW will keep the machines for up to 10 years with operating hours fluctuating on the operations that are required. “We don’t work the machines flat out for 10 hours a day, 5 days a week like a traditional civil engineering contractor would.” Leigh points out “As a multi-functional workforce we have a whole host of duties to fulfil some of which are not machine orientated which means the machines may be parked up for short spells of time whilst the team are concentrating on other duties.  We have everything maintained by the dealer so that we have no issues with warranties.”  Both machines meet environmental standards being Stage V regulated with both also filled with bio-oils.

Both machines have been sourced through NRW’s procurement process. “We, as a team, don’t get a choice in what machine we get as everything goes out to competitive tender. However, we do have the input into deciding on a specification to meet the specific requirements of our team and the locations we operate in.” Leigh explains “We say we need a 15m machine. What will turn up is up to the procurement team but so far, we’ve never been disappointed!”