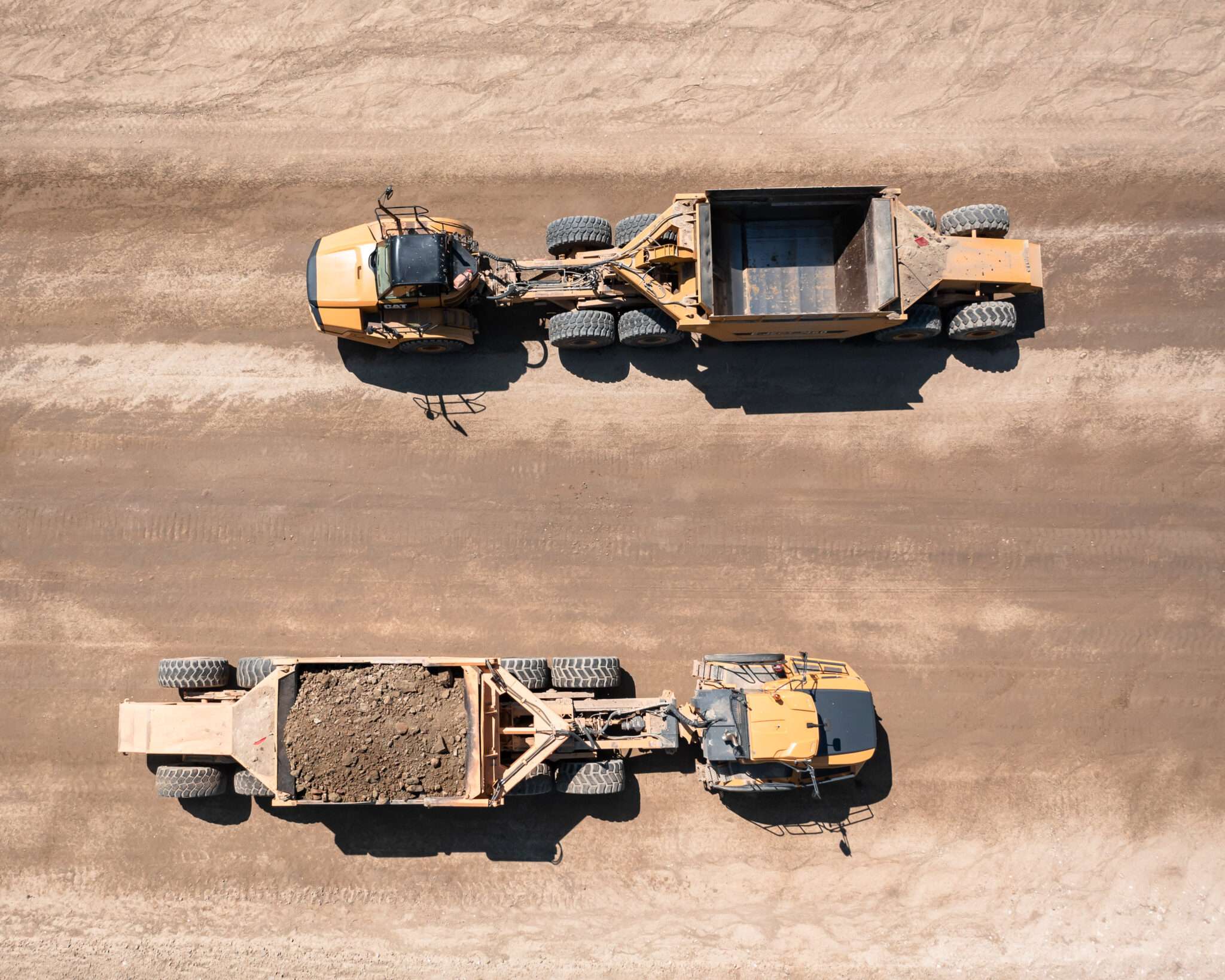 Founded in 1952 by Charles and Jack Richardson, Richardson Brother’s (Olds) Ltd began like many other family operated construction companies with a few pieces of equipment and small crew of people. Richardson Brother’s first piece of equipment was a Dresser TD7 dozer, working in and around the town of Olds, Alberta. In 1955, after Charles and Jack founded the company, Jack and Jeannine Richardson took over operating the company as Charles returned to the farming industry. In the following years, Frank, Stephen, and Larry Richardson would join the company after their university educations were complete.

These three brothers continued operating the family business of Richardson Brother’s (Olds) Ltd into the modern-day construction market. The early days for Richardson Brothers looked a lot different than their modern-day scope of work. Initially starting out doing seismic work in the Northern Territories and lease roads for Western Alberta forestry, the three Brother’s soon grew the business further into the aggregate and earthmoving market of Alberta.

Projects of note included the largest sewage treatment lagoon in Alberta, as well as construction of vital irrigation canal and water storage facilities in Southern Alberta. Today, the irrigation infrastructure Richardson Brothers built serves a vital part in Alberta’s farming industry and, a testament to Richardson Brother’s commitment to their clients and work. Today, Richardson Brothers scope of work includes gravel hauling and aggregate sales, general earthworks contracting on some of Alberta’s largest infrastructure projects, asphalt production and sales, along with other pre-construction services and management. Their current and frankly most notable project includes a large highway earthworks project West of Calgary, Alberta.

When it comes to moving earth, it is all about quantity at the lowest cost per ton, cubic yard, or cubic meter depending on your country’s unit of measurement. When Richardson Brothers was tasked with a mass earthworks and grading project for Alberta’s next highway they turned to Caterpillar and Finning for equipment and maintenance solutions.

Richardson Brother’s selected a Caterpillar 6015B for top loading their fleet of rigid frame, articulated dump trucks, Ejector Wagons, and pull behind scrapers. Purchased brand new from Finning Calgary, the Cat 6015B is outfitted with a Weldco Beales Manufacturing high volume Muskeg bucket rated to a 15.5 cubic yard capacity. Although the particular application for the 6015B is not in muskeg, Richardson Brothers needed the additional capacity a muskeg bucket could offer. Typical material encountered on this project includes glacial till, glacial outwash gravels, large cobble with occasional boulders, and patches of decomposed bedrock.

To properly outfit the Muskeg bucket for these types of material, additional ground engaging tools (GET) were added. GET included Cat Penetration Plus teeth, weld on lip shrouds between the teeth across the 120” spade edge, CAT pin on wing shrouds and weld on heel shrouds, side wear bars, and ½” AR450 steel inner shell liner and outer cheek plates. From a bucket designed for high volume low abrasion muskeg material, this 15.5 cubic yard 21,500lb bucket quickly became a dependable tool for digging up Alberta dirt.

The 6015B works primarily in major cuts of the project top loading Komatsu HD465 rigid frame trucks, BELL B45 and Cat 745 articulated trucks equipped with Eject Systems 7460 ejector wagons. In conjunction with the 6015B, a Caterpillar 390F LME equipped with a 9 cubic yard bucket top loads Eject 7460 and Deere 460E ADT’s in sections of the project where the 6015B would be cramped trying to attempt earthworks.

For the Richardson Brothers, finding creative methods to move dirt faster and better than competing earthworks contractors is deeply engrained in how they do business. Richardson Brothers operates a fleet of 8 Eject Systems ejector wagons pulled behind Cat 740B, Cat 745B/C, and Bell B45 ADT’s. These units were all sourced from the United States of America in Phoenix, Iowa, and South Carolina and offer flexibility for the company to switch between conventional dump box on their ADT fleet, to a higher capacity tow behind ejector wagon with 35% less fuel burn than comparable rigid frame haul trucks.

This particular setup eliminates the need for ADT’s to stop, back up, dump the load, and return the dump box to travel position. The Eject Systems 7460 can spread material on the fly, resulting in faster cycle times. With 12% less ground pressure thanks to weight being spread out over 10 tires, the rear walking beam style axle allows the tires to oscillate providing outstanding stability. Overall, the Eject Systems 7460 has a capacity of 36.5 cubic yards struck or 46.5 cubic yards with factory side boards equipped and material heaped. The unit is designed for nearly all materials and can handle rocks up to 24inches in diameter, the 78inch wide apron allows for quick spreading of material with the positive bulldozer ejector extending 4inches beyond the apron edge to minimize carry back. On average, these units travel at 40km/hr empty and 30km/hr fully loaded.

In addition to the fleet of Eject Systems, Richardson Brothers also runs a fleet of Mobile Track Solutions (MTS) MT-42 towed scrapers behind Case 580 tractors and Cat 745B/C ADT’s. In applications where low ground pressure is required such as topsoil or loam type material, the MT-42 scrapers provide an unparalleled earthmoving solution. To load these scrapers faster, a Caterpillar D10T2 dozer equipped with a cushion push blade assists in push loading the scrapers. What is unique about the MTS pull behind scrapers is the two-stage ejection system that maximizes force during the first 75% of ejection and a faster speed to “throw” the remaining 25% of material out of the bowl. In addition, these units are utilized when spreading topsoil over slopes. Typically, topsoil has to be dumped at the toe or top of a slope and spread by dozer across the slope.

The MTS pull behind scrapers navigate the slope spreading material as they go, in turn the dozer makes fewer passes to ensure adequate material coverage and grade is achieved. Between the Mobile Track Solutions MT-42 and Eject Systems 7460 units, Richardson Brothers delivers beyond client expectations in terms of earth moved and project completion timelines. On a good day, between their 8 ejector wagons, 6 MT-42 scrapers behind 745’s and Case 580 tractors, and 10 x 40 ton ADT’s, the company achieves an impressive 30,000 cubic meters of earth moved per day on site.

Like many other companies, selecting the right equipment and technology is a key part of Richardson Brothers success over the past 65+ years. When it comes to equipment, Richardson Brothers partners with dealers who can provide the best support, parts availability, and warranty. Minimizing downtime is key to building a reputation of successful project completion in Alberta, that is why Richardson Brothers leans heavily on dealers like Brandt Tractor, Finning Cat, and SMS Equipment to provide solutions for their mixed fleet of earthmoving equipment. With respect to technology, Richardson Brothers is a firm believer in GPS machine control, they have been using it for 18 years and are at the forefront of technology offerings from OEM’s and dealers.

Their fleet of John Deere 872GP graders sport the new 3D mastless offering from TopCon, in addition to their 950K with 3D Max machine control, 1050K with 2D Topcon machine control system, and pair of Komatsu D71Pxi dozers with integrated iMC 2.0 machine control. For large earthworks projects like this, Richardson Brothers uses aerial surveying to monitor project progress in cut, fill, and stockpile areas. Using an 11kg, 8 rotor Stryder MK2 octorotor UAV the surveying team flys regularly to gather data with a 40megapixel camera mounted on the drone. This drone in particular can produce photos with 3cm accuracy using built in GPS and a base station providing GPS corrections.

After data is collected, a software called Agisoft compiles photos into an orthomosaic, from which point cloud data can be obtained to measure volumes of stockpiles, material excavated, and tracking progress of lifts in areas of backfill. In some rare cases, grade stakes are still used to delineate stripping limits and grade in large areas with multiple tow behind scrapers working. These stakes are set out using a TopCon rover and base station setup running on Brandt Net, a cellphone based GPS service for surveyors.

With a broad offering of services, Richardson Brothers (Olds) Ltd is fortunate to work year round when many other earthworks contractors shutdown for winter months. In the Winter months, the company focuses on earthworks in wet/marsh environments when frozen ground is ideal for excavation work. In some cases the company completely reverts to crushing aggregate to produce construction materials and winter road maintenance product. If there is one thing for sure, Richardson Brothers will continue to build Alberta far into the future.