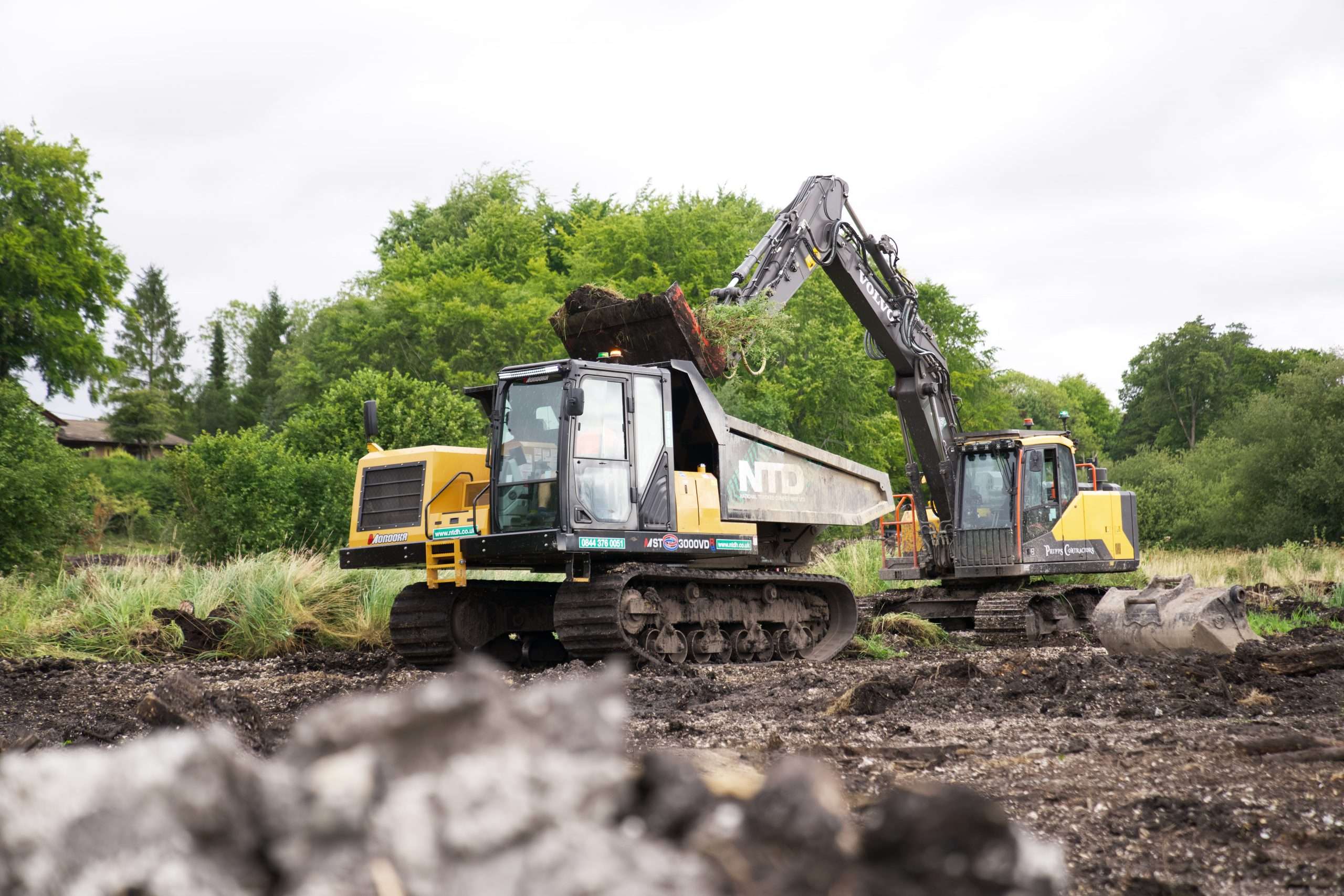 There has been an increasing trend in recent times towards tracked dumpers over conventional wheeled machines and nowhere more is this evident than on projects where ground conditions are soft or environmentally sensitive.

Leading the way is Morooka, world leaders in tracked dumper technology whose sole UK importer is Cautrac, founded in 1994 and today is one of the top construction equipment sales companies in the country with depots in Colchester, Essex, and Bolton in Greater Manchester.

Morooka is unique because it is the only tracked carrier manufacturer offering a complete range from 2.5 tonne to 20 tonne carrying capacity, including two 360 degree fully rotating machines.  One such machine has been deployed by RJ Bull Environmental Contractors based in Winchester, England. The company’s work stretches from projects on Sites of Special Scientific Interest and Special Areas of Conservation through to private estates and riparian contracts.

The machine has been hired out by National Tracked Dumper Hire Ltd (NTD). NTD have been a valued customer of  Cautrac since being established in 2015 and today has built up what is regarded as the youngest and broadest fleet of tracked dumpers available in the UK. The company has been instrumental in the reintroduction to the UK market of modern 360˚ slewing tracked dumpers. These machines offer benefits over standard swivel skip or rigid tracked dumpers because the operator can always be driving forward and there is rarely a need to reverse. NTD now run largest hire fleet of Rotating Tracked dumpers in UK with over seventy Morooka models alone.

Awesome Earthmovers caught up with the environmental contractor and a top of the range Morooka MST-3000VDR.  This machine is currently the largest 360 degree rotating tracked dumper available in the UK with a maximum payload of 15.5 tonne.  It was undertaking work on a private estate south of Wherwell near Andover in Hampshire where a large lake is being constructed.

The dumper is proving its worth, moving tonnes of material from the cut area to the fill area on what is a very wet site. Contractor Robert Bull comments: “The water table here is probably only a foot below the surface and even with tracked vehicles we are having to put down ground protection mats, which gives you an idea of how challenging the terrain is.”

The lake itself covers around four acres, requiring a 30,000 cubic metre dig, and the Morooka MST-3000VDR has been an invaluable asset to the project which should be completed sometime in October or early November.

The environmental contractors use a lot of Morookas of various sizes, from 3 to 11 tonnes, working on other contracts such as flood relief schemes, but the MST-3000VDR is the biggest in the fleet. “With a 15.5-tonne capacity, it is ideal for this contract where high volumes of material are being moved over wet and muddy terrain. The material is not necessarily heavy, but it is bulky,” says Robert.

Because the entire upper structure of the Morooka MST-3000VDR can be rotated, the excavation and transporting of soil is made easier and more efficient. In the case of most tracked dumpers, once the operator reaches the departure point for the soil, the machine would need to turn with the full load. This movement can churn the ground up badly, and requires a huge surge of power. But with the MST-3000VDR, this does not happen, because the unit can drive in either direction. This means valuable time, effort, and money are saved. Other benefits of a rotating upper structure include less wear and tear on tracks, and on the undercarriage roller.

The operator can gain access through the large access panels or via the front mounted step in order to get between the cab and the engine bay – where all of the engine checks are carried out. These tasks include checking the oil level and cleaning the air filter. The fuel filling point together with the hydraulic fluid filling points are also located here – making access to this area extremely important.

that provides a comfortable working environment

We also got speaking to operator Max Russell who is relatively new to the industry and was immediately impressed by the Morooka. “While I don’t have anything really to compare it with, I can say it is very agile and easy to manoeuvre around the site. The joystick controls make it very driver friendly, the cab provides a comfortable working environment which is great as I spend a lot of time in it, and visibility, in my opinion, is even better than other Morooka models. We are operating on some challenging terrain, but the machine is very stable, even on slight inclines.”

Cautrac’s Managing Director Craig Taylor told us there are a number of reasons that have influenced the increase in popularity of tracked dumpers.  Primarily, they minimise the damage to ground conditions when travelling, especially on soft terrain.  With all evidence suggesting that our climate is going to continue to get wetter, it is then logical that machines that minimise damage to the ground are likely to be more sought after.

“Tracked dumpers are well suited to job sites that are wet and muddy,” says Craig. “In addition, they have a positive impact on the environment thanks to their low ground pressure, so they are becoming more and more popular with contractors working in sensitive ground conditions.  Plus, a tracked dumper will cause a lot less damage to the site compared to a wheeled dumper, meaning you won’t have the same reinstatement costs after the job is finished.”

Not only do these machines reduce damage to the ground but this consequently allows some jobs to happen that previously would have had to be done an alternative way or at a different time of year. Tracked dumpers also offer greater safety over conventional wheeled machines as they are less likely to turn over and are more stable on uneven ground.

It is perhaps not surprising that sales of Morooka tracked dumpers are steadily increasing, with Cautrac bringing into the UK around 50 to 70 machines every year since 2017, making it one of the biggest Morooka dealers in the world. “It is still not a huge volume but for a specialised machine but it is a significant number, and growing,” says Craig.

New Morooka models will be making their debut

at the Bauma 2022 Exhibition in Germany

All new models will be EU Stage V compliant, like the MST-3000VDR featured here, and larger models will have auto deceleration that improves fuel efficiency, reduces CO2 emissions, and noise. This works on the basis that if the truck is not travelling or tipping for a set period of time, the engine rpm with automatically drop to low idle.

All new models, too, will go to a joystick control lever for travel which improves operator comfort reducing fatigue. Visibility has also been improved from the operator’s seat, while a cruise control function will also feature on larger models to assist in setting a constant travel speed when required