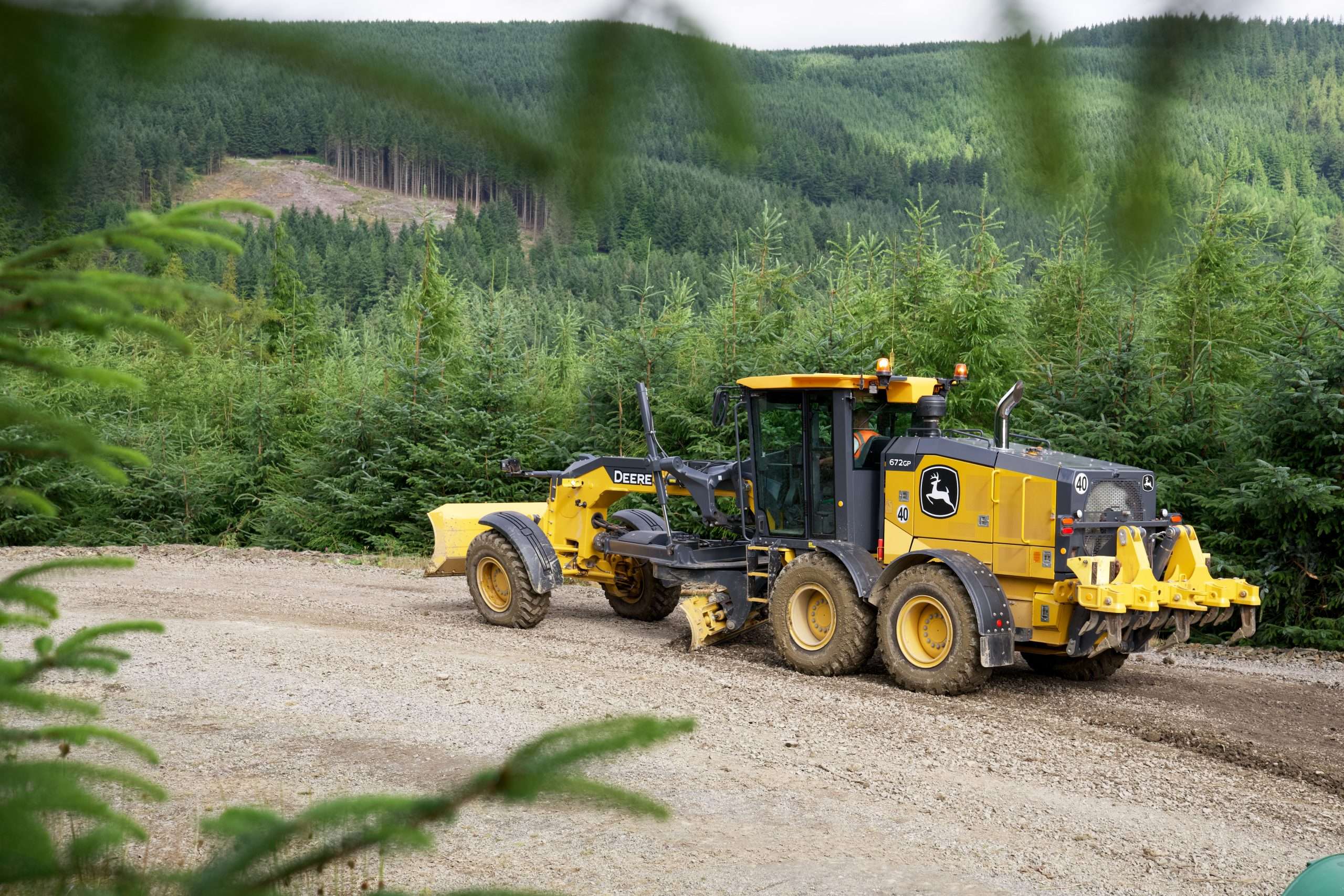 For decades, the John Deere name has been synonymous around the globe for quality construction and agricultural machinery.

Whilst their name is known the world over, Europe has been a relatively small market for the construction ranges for many years.  However, this all changed with the purchase in 2017 of the Wirtgen Group. Not only did the purchase give the Deere brand a lead in the road building and paving sector with Benninghoven, Hamm, Vogele and Wirtgen but it also brought one of the most respected crushing and screening brands, Kleeman, under the Deere umbrella.

The first models to arrive in Europe have been the range of motor graders. The six-model range encompasses machines with four and six-wheel drive and with engine ratings from 215 to 300 horsepower.

The launch of the grader models into Europe puts them into a market dominated by one brand, Caterpillar. Whilst there are other alternatives, the American manufacturer has spearheaded the European grader market for many years but with the launch of the Deere range, things are about to change.

Manufactured in the company’s huge Davenport works in Iowa, the graders initially went on sale in 2019 but with the global pandemic hitting supply chains, deliveries were few and far between. The first, and long-awaited, showing of a Deere grader in the UK came at the 2022 Hillhead Quarry show with Wirtgen UK placing a 672GP on the entrance to their stand. Whilst not the first to arrive in the country, this was probably the most public showing of the Deere brand that anyone in Wirtgen UK could have wished for. “We had countless people coming onto the stand to look at the machine.” Tom Moss, Wirtgen UK’s Area Sales Manager comments: “Feedback was very good from existing grader users, and this has been just what we wanted to hear.”

The show was the ideal opportunity for many existing grader users to get their first close-up look at the Deere product.  With the machine already sold, it was on a low loader and off to the Lake District where it was put to work for WL Straughan and Sons.   Forestry England have a contract with Straughan to maintain almost the entire network of forest roads from the East to West coasts and from the Scottish Border down to Lancaster.

Straughan operate from their headquarters in Bedlington, Northumberland and provide a wide range of landscaping and environmental services with the forestry road maintenance works being just part of their business. Winning the contract to undertake the works just a handful of years ago, they took on experienced grader operator Kevin Purdham and his 18-year-old Champion grader from the retiring contractor. Kevin has been working the forest roads of this region for over thirty years and knows just what the client wants and expects when the roads are maintained. “I’ve been doing this job a long time. I’ve never been sacked either, so I must be doing something right!” Kevin jokes.

“I was asked to have a look on the market to see what my old machine could be replaced with. Kevin explains: “The direct replacement didn’t look as good as the original and other manufacturers seemed to be in a similar vein too. I spoke to Callum McRae who had taken the first Deere grader as he does very similar work to me, and he was very complimentary about both the build quality and reliability of the product. I looked hard into the machine and decided that it would be the best replacement for my old machine. Thankfully the management at Straughan agreed and the order was placed for a new 672GP.

The 672GP replaces Kevin’s old machine which he had looked after extremely well. “When I put it on the truck to go to auction it was still on the original hydraulic pump and engine with just the turbo replaced at 14500 hours.” He continues: “The machine works hard, but I’ve never thrashed them. They’re here to trim roads and ditches, very rarely do we have to start pushing massive amounts of material with them.”

With many years spent operating older graders, all of which were fitted with traditional lever controls, Kevin’s introduction to the new dual joystick control on the 672GP was a baptism of fire. “I’m still not used to the joysticks and all of their short cut functions!” He laughs: “Two things I am really impressed with is the forward view and seating position with the joystick control. It’s a far more comfortable seating position to be in and the responsive nature of the joysticks means that I’m not as tired at the end of a shift.” The large, fully glazed cab with its well laid out controls is seen by Kevin as a massive step up from his old machine; “Everything is right where you need it to be. It’s just well-made and right for the job.” These comments are echoed when Kevin walks us around the machine. “Just look at the build on this.” He points out: “There’s very little plastic, it’s all metal, and not cheap tin you find on other makes – proper stuff!”

The 672GP benefits from selectable four or six-wheel-drive allowing Kevin to tailor the machine to the conditions he is operating in. As Kevin pointed out, the build quality of the grader surpasses anything else on the market and this is further confirmed when we looked under the bonnet. Sturdy steel doors encapsulate the Stage V compliant Deere Powertech engine. With a 9-litre capacity, the engine delivers 190kW through an automatic dual-path hydrostatic transmission called Power-Shift Plus. This allows variable power outputs throughout the gear ranges from 147kW in gear one, up to 190kW in gear 8.

Following that initial inquiry, McCrae went to Germany to put the grader through its paces at the Windhagen factory of the Wirtgen Group, which sells the machines in Europe. “After 10 minutes operating it I knew it was the machine for us.” Big plus points such as the advanced six-wheel-drive system, inbuilt grade control, high horsepower and blade pull figures combine to make it what he described as “the best option” for the company.

The highly specified machine comes complete with a front dozer blade and rear ripper/scarifier externally whilst the GP (Grade Pro) status adds dual joystick controls with lever steer and standard steering wheel, automatic return-to-straight, and a high-resolution reversing camera. Deere’s automation suite reduces the number of controls needed to perform common tasks such as auto-articulation, blade flip, and operator-selectable machine pre-sets. The machines feature ‘open-architecture’ design that lets users employ any brand of grade-control systems. All GP models are equipped as standard with automated cross-slope which makes it simpler to hold a consistent slope by allowing operators to run a single control while the machine automatically adjusts the opposite side of the blade.

The 3.66m moldboard is mounted to Deere’s ‘premium circle’ which has a sealed and lubricated roller element slewing bearing that requires less maintenance than traditional circles. The 610mm deep moldboard ensures adequate material retention with the three-piece cutting edge allowing for rapid changeovers when required.

Inside the fully glazed and spacious cab, Kevin heaps praise on the layout of the controls saying that everything is within easy reach and so intuitive. “I have to say that the view from the seat is so much better thanks to the lack of levers.” Kevin adds: “It also means the seating position is more comfortable. I can get out of this after a 10-hour day and feel fresh.”

The project in the Lake District saw Kevin trimming off a series of forest roads used by both walkers, mountain bikers and timber transport companies. The stretch he was working on at the time of our visit saw the grader clearing a landing where felled timber was stored and loaded along with the main access road into the forest. Two passes of the access road saw Kevin form the basic shape of the road, clearing loose debris from the surface before trimming the stone to a very acceptable finish. “The moldboard is almost wide enough to do the whole road in one pass, something we do on a single camber road.” Kevin explains: “We need dual cambers on this road though to divert the large amounts of water away from the road at the bottom.” The landing area was trimmed with a single cross-fall with Kevin gradually pushing the material across the ground to one side. “It’s still early days for me with the Deere.” Kevin admits: “But if the first few weeks are anything to go by, the company has bought probably the best grader money can b