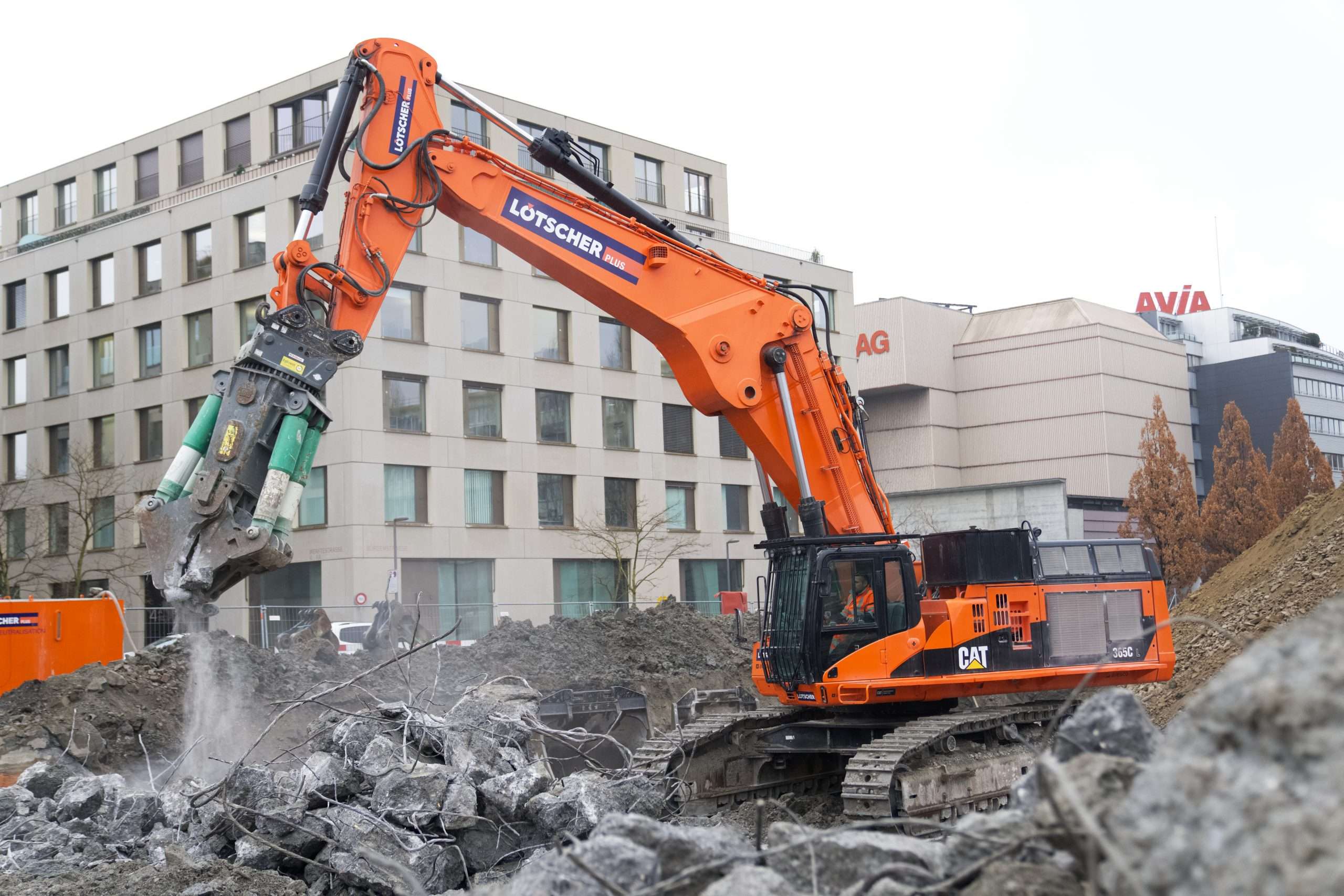 Sitting on the shores of the picturesque lake that bears the same name, Lucerne is one of the most densely populated cities in Switzerland. The city is currently seeing large development projects being undertaken to improve transport, infrastructure, and medical facilities at the main hospital.

One of the city’s leading construction companies is Lötscher Plus. With its headquarters in Lucerne, Lötscher Plus undertakes a wide variety of construction disciplines from demolition and earthworks through to vacuum excavation, ready mixed concrete production, and transport.

Fritz Lötscher Senior started his company by quarrying gravel on the Gasshof property in 1924. Originally undertaken by sheer physical labour, Fritz saw the opportunity to expand his operations using mechanical means making them more productive and profitable. The company has since expanded its quarrying activities along with the addition of road building, recycling, and demolition operations putting them into the position they are today as one of the leading multi-disciplined companies within Central Switzerland. The company is still controlled by the Lötscher family with Fritz’s grandson Roman Lötscher now overseeing the company.

AWESOME EARTHMOVERS visited two of Lötscher Plus’ projects in Lucerne. The first project saw the company working alongside Aregger to remove a vast amount of rock in the city centre to allow a large extension to the local hospital to be undertaken. Using the large resources of their own plant and machinery fleet, Lötscher had deployed a Caterpillar 352 excavator to the development to load a constant stream of tipper trucks removing the rock from the large excavation. In just three passes, the trucks were sent on their way thanks to the capabilities of the excavator. The in-house fleet of machinery within the Lötscher Group comes from a variety of manufacturers and usually carries the company’s distinctive orange and blue livery. With the Swiss government’s tough stance on environmental issues, much of the machinery operated across the group exceeds the highest European environmental standards. Lötscher believes that responsibility towards future generations requires a careful and considerate approach and attaches great importance to the concerns of people and the environment. This stance saw the company receive a prestigious award from the Swiss Environmental Foundation in 2013. The company has taken its environmental responsibilities even further with the introduction of a fleet of vehicles powered by biodiesel, the advanced recycling of building materials, a very exemplary landfill management strategy along with a year-on-year reduction in its carbon footprint.

The second project we visited was being undertaken by the demolition side of Lötscher Plus On a very cold morning, the company was on the final steps of the demolition of a former office block adjacent to the city’s railway station. Development work around the railway station to improve buildings and infrastructure has been an ongoing project for many years with older buildings making way for new, improved office and residential complexes. The building once occupying this plot was typical of many found across the region, being built from a reinforced concrete frame with an exterior cladding system.

With their wide and varied fleet of demolition equipment giving the company the capability to accept almost any demolition and recycling contract, Lötscher Plus had placed their largest machine on this particular project.

Based on a Caterpillar 365C excavator supplied by Swiss CAT dealer Avesco AG, the machine has been extensively modified to allow it to operate at heights of up to 35m with its three-piece demolition arm and extension boom. In this configuration and thanks to the additional 12t counterweight, the 365C weighs in at over 100 tonnes yet is still capable of handling a 5-tonne attachment.

As the high reach work had been completed at the time of our site visit, the 365C has been fitted with its smaller basement arm to rip out and process the slab and foundations. Whilst this configuration reduces the reach for the machine, the capabilities and tool handling ability are massively increased.

The 365C was working within the footprint of the old building tackling the large sub-structure concrete with several of its large attachments. Like the rest of the Lötscher fleet, the 365C is equipped with an OilQuick hitch. The use of OilQuick hitch makes the most of the excavator’s potential allowing the operator to change attachments in seconds from the total safety of the cab. What seems to be the Swiss standard for demolition attachments from Egli. Manufactured in Switzerland, the Egli range of material processors features a range of interchangeable jaws allowing the attachment to work to its maximum potential on a range of materials. For the reinforced concrete found on this project, the standard round box jaws were fitted which allows the tool to both crush concrete and cut the rebar in one movement. The XMB5.4 is a 5.4t tool that possess a closing force of over 210 tonnes allowing it to handle any concrete on this project. The Egli was helped along by a large NPK cracker which was used to break up the larger pieces into more manageable sections for the XMB5.4 to process. Each large section was manipulated into the correct orientation to allow the jaws of either the NPK or Egli to get the best purchase and to provide the maximum crushing force to the material. The use of high specification equipment and the skill of a good operator ensured the concrete was processed very quickly and safely.

With the concrete processed down to a size that could be handled by a crusher, the large bucket was put on the machine to stockpile the material at the side of the excavation. From there it was loaded on Lötscher’s fleet of five-axle trucks by a CAT 950H wheeled loader for transportation to the company’s material processing centre.  Here, it was crushed, steel removed for recycling, and then screened before being taken back to site for use in the forthcoming construction works.

As the removal of the concrete sub-structures progressed, another CAT excavator, this time a smaller 329E LN, started a reduced dig across the site to allow the construction teams to commence their operations.

Once the demolition and clearance operations were completed the Lötscher team left the site ready for the future development to commence on a clean, clear construction site with little evidence of their being a structure sitting there for several decades.