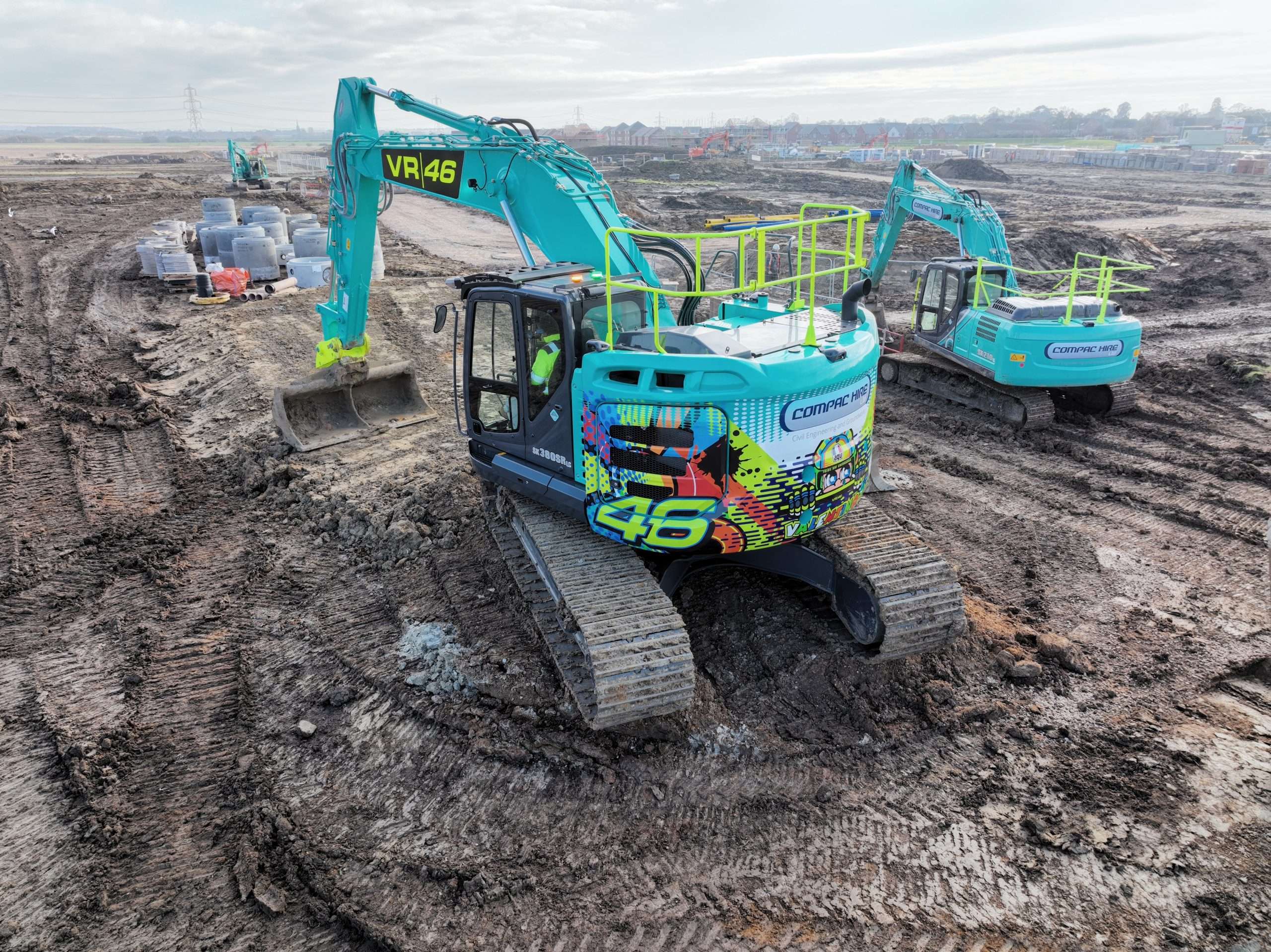 The unique looking machine would look great on any grid!

The recent addition of the SK380SR to the Kobelco Europe excavator lineup shows how the changing nature of the earthmoving market is now dictating large capacity machines with as small a footprint as possible.

The market for these large, compact tail swing machines is small now and with only four mainstream manufacturers building models of this size, contractors looking for such a machine, don’t have a massive choice to choose from.

Molson Group, the UK’s dealer for the range of Kobelco excavators has recently delivered the first SK380SR to Compac Hire, the Midlands-based civil engineering specialists. Compac Hire is owned and run by husband-and-wife team Mossy and Michelle Heffernan. Formerly working for one of the largest suppliers of civil engineering services to the UK housebuilding industry, Mossy decided just a couple of years ago, that it was time to make a go of it on his own. Setting up Compac Hire to initially supply trench compactors and rollers to the company he was working for. This venture proved to be a great start and when the opportunity arose to expand his operations, Mossy jumped at it.

Setting the business up with several excavators from another manufacturer, the company steadily grew, taking on larger and larger contracts with some of the well-known housebuilders and contractors. Wanting to keep their fleet fresh and low-houred, Mossy and Michelle decided that the machines should be rotated on a three-year cycle. Whilst this was possible prior to the Covid pandemic and the increase in demand for equipment, ever-increasing lead times led the couple to look elsewhere: “We were happy and still are with the Hitachi products.” Mossy explains, “We just needed machines on a quicker basis to allow our fleet to keep fresh and expand where we had to. We met up with Dan Bailey at Molson and struck a deal for a new SK210LC-10. What Dan said they would do, they did, and the machine has impressed us since its arrival.”

Following the first machine’s arrival, a second machine, an SK230SRLC compact tail swing machine was ordered and, like the first, it has impressed sufficiently for Mossy and Michelle to place an order for their largest machine, the SK380SRLC, replacing an existing 30-tonne machine.

With an operating weight of 36.5 tonnes, the SK380SRLC takes its power from a 7.6 litre Hino diesel delivering 200Kw and meets current StageV emissions regulations. The compact dimensions of the upper structure have meant that the engine, cooling pack, and hydraulic system have been shoe-horned into the curvaceous body. Access on compact tail swing machines is always going to be tighter than standard machines, but Kobelco’s designers have done a great job in making sure that all components have a good degree of accessibility, even for the largest of fitter’s hands! A standard long undercarriage carries the machine and with 800mm wide pads fitted, the rear overhang of the counterweight is a minimal 50mm. “While most of our work starts in open fields, we originally thought that a compact machine was a little bit of overkill.” Mossy states: “The nature of the work sometimes puts us in tight

spots and looking at the lack of scuff marks on the SK230 we are running, just goes to show that there is a cosmetic benefit to having the smaller rear overhang. We’re not precious about the machines, they’re bought to do a job, but when we come to sell them privately at the end of three years, we want them to return as much money as possible.” What has impressed Mossy and his operator Kevin Sheeran is the size of the cab. Traditionally, compact tail swing machines lack in the depth of the cab over traditional machines, but the SK380SR cab is within millimetres of the standard tail swing variant’s dimensions, something Kevin is very pleased about: “It’s nice to have that little bit of extra room behind the seat to put your bag and flask securely. The cab is a really nice place too, the Grammer seat is very comfortable, and everything is easy to use. We don’t need anything overcomplicated.”

With the order placed for the SK380SR, Mossy realised that it was going to wear plant number 46. As he and many of his team are big MotoGP fans, the significance of that number was too much to miss out on. For those not into the sport, 46 is the number of one of the most successful racers of all time – Valentino Rossi. “With Rossi retiring, the plant number for the machine being his race number, it was an opportunity we had to celebrate.” Mossy comments: “We sat down with Dan to discuss a potential paint job but instead, we settled on a wrap. Molson introduced us to Dan Green at Image Sign Systems who came up with what you see on the machine. We have to say it’s blown us away. It’s amazing to see the detail in it.”

The intricate wrap shows off the curvy counterweight and extends from behind the cab, round the counterweight, and stops on the offside of the upper structure. Wrapped in Avery Dennison 1105 vinyl, the counterweight and panels depict the colours and logos from Rossi’s Sky VR46 team and have been reproduced in exquisite detail. “I have to say that Image Sign Systems have done an amazing job on the machine.” Mossy adds: “And at a fraction of a cost to paint too. When it comes to selling the 380, we can simply strip the vinyl off and you have a clean and hopefully, blemish-free rear end.”

We caught up with the Compac Hire team on a large site near Newark where they were in the final throes of completing the roads and sewers for a new housing estate for one of the UK’s largest developers. “This is our bread-and-butter work, deep drainage, and roads.” Mossy explains: “We needed a machine that was capable of lifting large drag boxes in and out of excavations and lifting some of the large easy-bases in, some of which can be about 7 tonnes.

The SK380 fits this bill perfectly in a package that doesn’t require too much room in the cut. It will be ideal for undertaking main connections in the road too as we will need a much-reduced space in which to operate.” Whilst the majority of the deep drainage had been completed prior to the arrival of the SK380, the new machine’s lifting abilities were called on straight away with an easy base and riser section to be placed at the end of a drain run. Lifting the base in line with the tracks proved very easy and with a combined weight of almost 5 tonnes hanging off the chains, even slewing cross-carriage saw the excavators’ tracks keep in firm contact with the ground. “It’s very impressive when it comes to lifting.” Kevin said: “Even when we have to lift a large trench box out of the ground, there’s plenty of power when required.”

Molson supplies the Kobelcos with a three-year warranty as standard and will perform the first, 500-hour service when the time comes. Mossy will then take over the servicing work using his own fitter. “I just find it easier to use our own lad and get the Kobelco parts sent through.” He continues: “We can drop on a service or any other work that needs doing immediately. Not that we have had to wait for anything from Molson, their response and backup have been exemplary so far.”