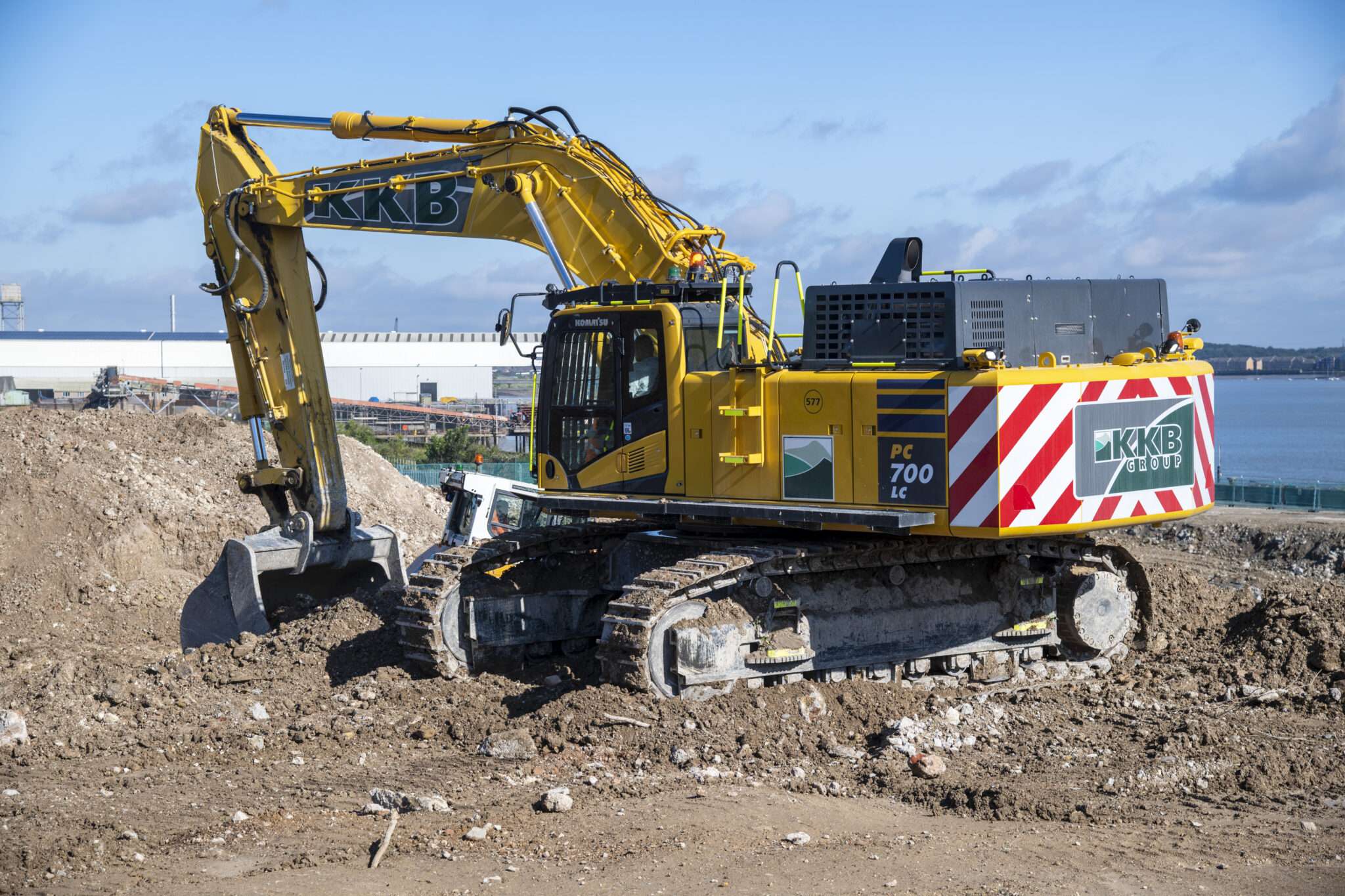 With suitable building land in the South East in short supply and the demand for more and more housing outstripping availability, regeneration of former industrial land is an increasing solution for the housing crisis.

Demand for building land in Northfleet has seen developers purchase land adjacent to the Thames once occupied by the huge cement works. Demolished a few years ago, the land has been unoccupied and only used by the vehicles accessing the port facilities. The site is split into two parts with the plot nearest the port being assigned to new light industrial units whilst the larger section will be developed into much needed accommodation with views across the Thames.

To facilitate the regeneration of the land, the developers have called in Kent based remediation and crushing specialists KKB Group. Headquartered in Rochester, KKB operate nationwide for a select list of Blue Chip clients providing crushing and screening services, material handling solutions and remediation projects. The Northfleet project involves the below ground demolition of former cement works foundations along with over 600,00m3 of cut and fill works to bring the site back into a suitable state for the developers.

Whilst providing services for some of the largest names in the industry, KKB remain family owned with just a small core of office staff handling the day to day running of the company.

AWESOME EARTHMOVERS met up with Plant Director Craig Hore at Northfleet to look at some of his fleet in action. “We operate over excavators from 8 tonnes up to 70 tonnes along with a range of dozers, wheeled loaders, 30 and 45 tonne capacity trucks and crushing and screening plant.” Craig explains “We try not to cross hire kit in preferring to add machines to the fleet as and when the projects dictate.” The fleet currently consists of a range of excavators from Komatsu, Liugong and Volvo, dozers from Komatsu and Liebherr with both Volvo and Komatsu supplying trucks and loading shovels. The crushing and screening plant comes from Powerscreen and Kleeman. “Whilst the fleet is mixed, we feel we have a good balance across the three or four major brands we use for earthmoving kit.” Craig explains “We have had good service from our Liebherr dozers, but these will be replaced with new D61 and D71 machines soon just to keep the number of manufacturers to a minimum.”

The large site at Northfleet is on an existing slope. The former cement manufacturing buildings had been knocked down with any below-ground structures buried under soils taken from one part of the sprawling site. Uncovering the sub-structures means a large amount of soil is to be removed and relocated temporarily. “We will keep all of the soil and concrete arisings on site for future use in the development.” Craig explains “The only material we will take away is the reinforcing bar we find inside the concrete.”

At the highest point on the site soils are already being stripped with a Liebherr PR736 pushing the material up to a waiting Komatsu PC360. Once loaded, the fleet of Volvo A30G trucks transfer the material to a hard standing on what was the former dock for the cement works. Once tipped a Liugong 922E excavator and Komatsu PC138 stockpile the soil for later use. Access to this highest point on the site wasn’t the easiest but KKB had brought in its largest excavator to sort this out and help create a ramp from the lowest level. The Komatsu PC700-11 weighs almost 68 tonnes and has been specified with a medium length boom and dipper combination giving the machine the flexibility the company requires from it. “For some of our projects a mass excavation set up would be ideal.” Craig explained “This set-up gives us a happy medium and gives us a good combination of both reach and breakout capacity.” A bespoke, heavy-duty 4m3 bucket has also been added to allow both bulk excavation work and the removal of large concrete sub-structures with ease.

Prior to Craig joining KKB he had a career in the military with the Royal Engineers as a plant operative amongst other duties. “I have a soft spot for the Volvo machines as that was what we used in the military. Saying that, I find both the Komatsu and Liugong machines to be just as reliable and productive. Like many in this position we were finding that damages were a constant issue as well as customers wanting to drive prices down. We purchased the Liugong excavators specifically for this side of the business as they had a lower initial purchase price than Komatsu and Volvo. You will get the same hire rate for a 20-tonne machine whether it is a Komatsu Volvo or Liugong. They all do the same job too.” One item Craig will not veer away from is articulated dump trucks. “We have a pair of 30 tonne Komatsu trucks, and they have been satisfactory. The Volvos are comfortable, powerful and reliable and you also have an almost cast-iron resale value for them.” He points out. The site currently has a fleet of 30 tonne Volvos and is awaiting the arrival of several A45G trucks from SMT GB to partner the PC700.

With the below ground structures being exposed, breaking them out has been left to a pair of 50 tonne excavators, one each from the Komatsu and Liugong stables and both sporting Rammer 4099 hammers. “We find that the Rammer hammers provide us with the best breaking performance.” Craig explains “They are a more expensive hammer to start with, but they are robust and reliable, and we can see the difference when it comes to move them on as we generate a greater resale value with them.”

Crushing operations on site are currently being taken care of by one of the company’s Kleeman MC110Z Evo jaw crushers. Loaded by a Komatsu PC290, the 40t crusher copes easily with the concrete being put through it. We use a 30t excavator fitted with an Okada muncher to pre-process the concrete first removing as much rebar as possible.” Craig comments “This speeds up the crushing process and eliminates blockages and damage to the crusher and its belts.” The material leaving the crusher is then rehandled by an 18 tonne Komatsu WA380 loading shovel which loads a pair of 30 tonne trucks to then transport the material into a holding area.

The whole project will see the KKB team working on site for another 12 months removing sub-structures and undertaking the cut and fill operation.