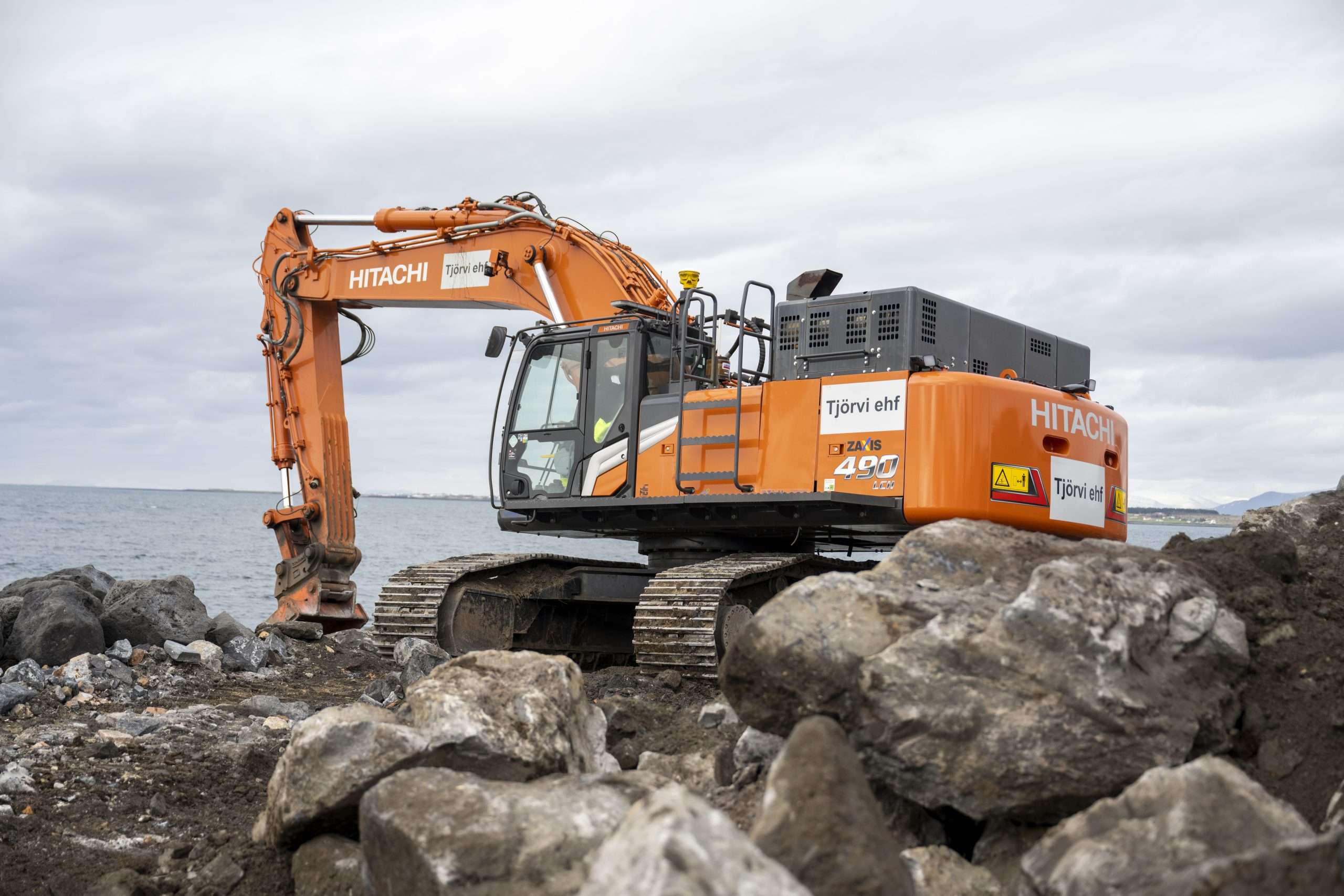 Rock makes up the bulk of the Icelandic earthmover’s daily fayre whether that be in quarries or digging out material ready for other construction operations to take place. One contractor who has made a good living from dealing with rock of all shapes and sizes is Tjörvi ehf whose owner Þorvaldur Arnarson, operates a 2021 Hitachi Zaxis 490LCH and undertakes work across the country from his base in Reykjavik.

Many of the projects Þorvaldur carries out involves the breaking out or handling of large rocks broken out from various projects across the country. Þorvaldur’s completed jobs are often documented on his Facebook page, Tjörvi Ehf and show some of the impressive work in the equally impressive locations he has worked in.

We caught up with Þorvaldur on a project he was working on for long term customer Sudurverk at a driving test centre on the outskirts of Reykjavik.

The testing centre incorporates a large concrete skid pan area, necessary for developing the driving skills of Icelandic youngsters.   There is also a small road network to allow students to practice on real road conditions, but without the issue of pedestrians or other traffic. Constructed across an old lava flow, one corner of the track had the 3.5m tall lava flow very close to the apex and was potentially causing an issue for the student drivers. It was seen as prudent to remove this corner back and reduce any potential issues down the line. Sudurverk called in Þorvaldur to undertake the work with his Hitachi and also supplied a Cat 340 excavator to load their 8×4 rigid Scania tipper with the material for its short trip to another project.

Using his Hitachi with his FRD hammer, Þorvaldur carefully broke up the material into sizeable chunks. The material is of relatively light weight yet is extremely abrasive and has to be handled carefully. Sitting in a spot between the track and the lava flow Þorvaldur quickly breaks out the material developing a large pile. Swapping the Hitachi for the Caterpillar, he placed a large piece of lava at the rear of the tipper body before gently placing more rock behind it. A short journey around the corner saw the material tipped before the process was repeated. The next day, the material was loaded onto the tipper for the short journey to the coast where Þorvaldur was again working for Sudurverk undertaking the maintenance of a huge sea wall.

Þorvaldur has built many of the rock armour walls around the Island and over the years has gained an enviable reputation for delivering quality results in some of the country’s harshest climates. The sea wall at Straumsvík had been constructed to protect one of Iceland’s largest aluminium smelting plants and had been built and extended by Þorvaldur many times over the years. “We had some really bad storms last winter and they have left their mark in some of the wall.” Þorvaldur explains: “I have undertaken many of the stone protection walls around the country, but this one has to be amongst the largest I have done with over 45,000m3 of material going into its construction.”

Þorvaldur’s new Hitachi replaced a smaller machine which ran for almost 10 years on similar work. The decision to upgrade the machine and also increase the size has allowed him to embark on larger projects in a more timely and effective manner. Full length internal and external track guards protect the bottom rollers from damage, but the Hitachi’s steps have quickly succumbed to working with large rocks and are now almost flattened to the track frames. The Hitachi, like many in Iceland, has been supplied in a high standard specification, with autolube, additional pipework, Trimble GPS system and has been fitted with a Skóflur hitch and range of buckets.

The short section of wall that Þorvaldur has to work on at Straumsvík is exposed to the constant battering of the North Atlantic waves. Thankfully for this small job, the weather is on his side, keeping the waves relatively low and away from his working area. Using his heavy duty Skóflur rock bucket, he picks out and places a couple of stones into position before tracking back to get some smaller material deposited from another project to fill in the gaps behind the larger rocks. With the infill completed Þorvaldur swaps the large rock bucket for his rock handling bucket that he used on his previous Hitachi Zaxis 460. The bucket looks very small on the dipper of the 50-tonne class machine but as Þorvaldur explains, it handles the rocks better than anything else he has used; “It is just the right size, the right width and grabs the rocks perfectly.” The smaller rock handling bucket has been constructed with a spike on the rear of the shell to allow Þorvaldur to manipulate the rocks into the correct orientation to lift them and place them into position. “The spike saves a lot of wear on the shell and cutting edge of the bucket and also makes it quicker to spin them around.”  Þorvaldur adds.

Digging through the pile of rock, Þorvaldur picks out what he sees as the right stones to put into the space. Once on the ground in front of the excavator, he manipulates the rock before picking it up, slewing it out and placing it in the wall. With the next row of rock in place, he starts again on the next step up, gradually getting to the top and backfilling behind to lock the stones in place.

Supplied by Vélafl ehf, the sole dealer for Hitachi Construction Machinery in Iceland, the Zaxis 490 is powered by a 296kw Isuzu Stage V engine and has been very reliable for Þorvaldur, as had his previous Zaxis 460. Keeping his excavators for at least 8 years, Þorvaldur relies on the excellent service and back up his local dealer affords him. This is also true of the service he receives from Skóflur, his bucket manufacturer. “They are both great companies to deal with.” Þorvaldur continues: “I wouldn’t want to go anywhere else for my equipment.”