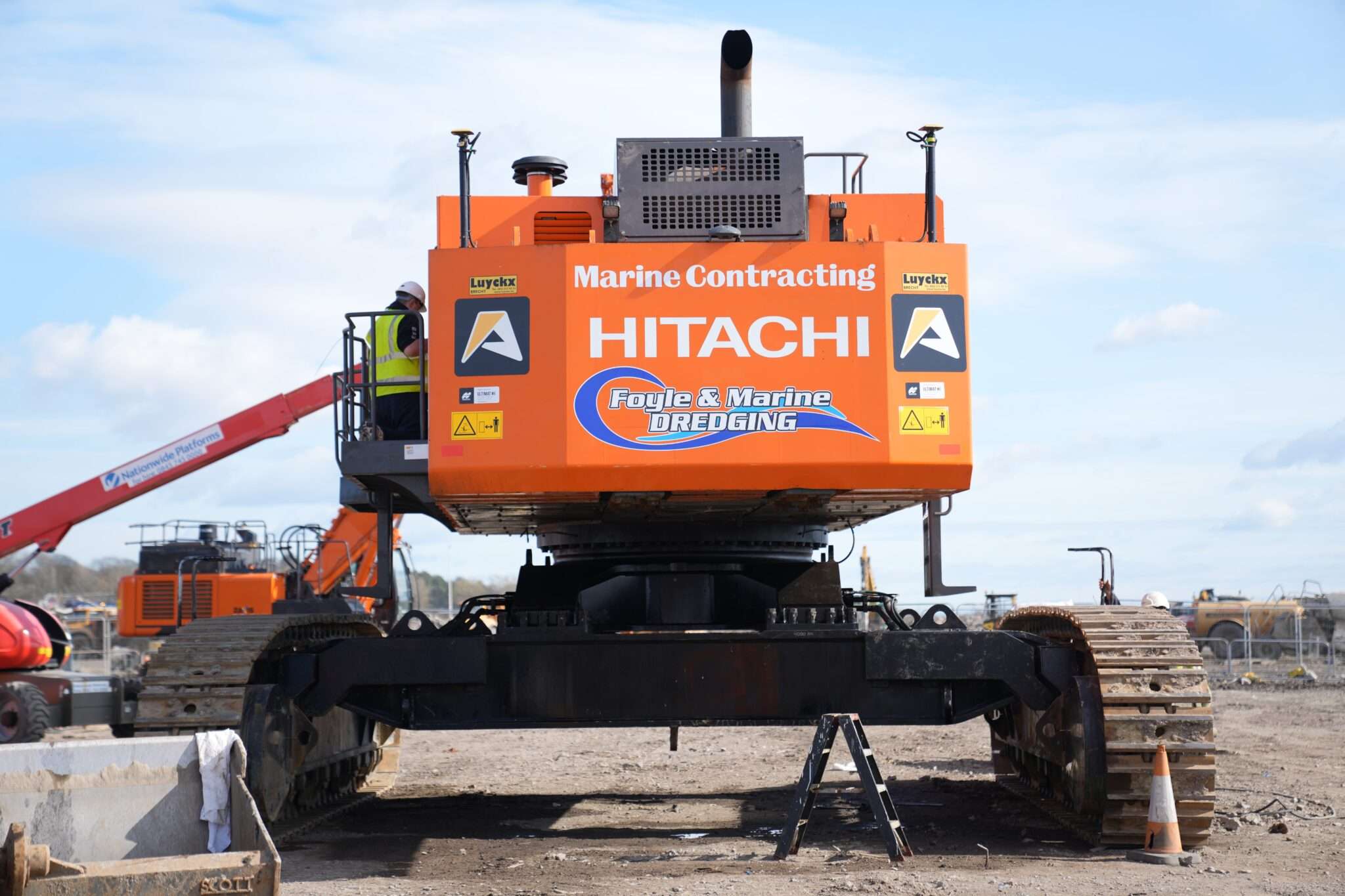 There’s something magical and mesmerising about observing man and machine operate in complete harmony. Having spent several days at the Port of Dundee in Scotland watching Foyle & Marine Dredging’s latest acquisition in action, a 180 tonne, 30m reach Hitachi EX1200 that goes by the name of Grizzly 2.0, we here at Awesome Earthmovers were totally captivated.

The standard EX1200 is a unique excavator within the Hitachi range in its own right, but what we have seen is something else. At its core lies clever and complex engineering; on the surface it is a robust and reliable, operator-friendly machine, but there is a whole lot more to this particular ‘extreme’ model than meets the eye, as we have discovered.

The machine has looked quite at home on this major project at the Port of Dundee. Winning the contract represented another major milestone in the long success story of Foyle & Marine Dredging.

“We initially planned to carry out the work at the port with our standard long reach machines, together with our dredger ‘Dinopotes’, but when the opportunity came up to acquire this modified Hitachi EX1200 from Belgium, we jumped at the chance,” says Foyle and Marine’s Fleet Superintendent and Project Manager Ciaran Cunningham, who joined the company over two years ago having spent 17 years as the Harbour Engineer in one of Northern Ireland’s Commercial Ports.

“It will be ideal as the company continues to branch out into larger coastal protection works. Having Grizzly 2.0 in our fleet means we can confidently tender for more complicated projects that we might not otherwise have considered. The addition of Grizzly 2.0 has already been invaluable. ”

The company operates two dredgers, ‘Dinopotes’ and ‘Aoibheann’. It was ‘Dinopotes’ which was mobilised to the Port of Dundee towards the end of last year to carry out 50000m3+ of capital dredging and assist Foyle and Marine Dredging’s rock armouring team in the construction of a revetment for the main contractor, construction and civils engineering company GRAHAM.

The Port of Dundee, part of the Forth Ports group, is strategically located on the east coast of Scotland, between Aberdeen and the central belt. The port lies on the north side of the sheltered River Tay estuary and is adjacent to the ring road which circles the outskirts of Dundee, providing fast and efficient road links in and out of the city.

It is in the middle of a £40m investment programme to redevelop the site and its facilities. It recently reached a significant milestone with the start of the latest contract for the construction of a new wharf alongside land upgrades to secure the port’s future in offshore renewable energy and North Sea Oil and Gas projects.

The work consists of the construction of a new wharf and the preparation and upgrade of over 15 hectares of land (equivalent to 20 full size football pitches) for the emerging energy transition sector.

The port’s existing Caledon East Warf is being replaced with a new heavy lift quayside that is capable of roll on/off operations as well as conventional lift on/off. Prince Charles Wharf is also undergoing an upgrade after almost 45 years’ service.

Once completed at the end of 2021, the total quayside available at this specific part of the port will be 485m. The quayside, combined with the capital dredging program under way in the River Tay will allow large semi-submersible vessels for wind installation to berth in the port.

Commented Senior Port Manager, David Webster: “This significant investment in the Port of Dundee demonstrates our commitment to bring large-scale renewables and decommissioning projects to Scotland. We are pleased to work with GRAHAM on this project in Dundee following their successful delivery of our new freight ferry terminal in Tilbury2 last year.”

Leo Martin, managing director of GRAHAM’s civil engineering division, said: “This will be our second project working in collaboration with Forth Ports, following our completion of Tilbury2 on the Thames.

“This is a fantastic scheme for GRAHAM to be working on and another opportunity to demonstrate our wide-ranging marine construction and civils capabilities.”

Still Growing Company with an Already Long and Successful History

Foyle & Marine Dredging had its beginnings back in 2007; it is a family business, headed up by Managing Director Stephen McCormick, whose wife Ciara is company secretary, while brother Michael’s skills are also employed on site work. Headquartered in Moville, Co Donegal, the company has two other sites – Letterkenny (also in Co Donegal) and Derry in Northern Ireland – and months of Covid lockdown has not deterred it from realising one of its busiest years ever. In the last 12 months, turnover was up 10% in the specialist contractor’s 13th year in business, and it is targeting further growth in the year ahead.

Clearly, the company has come a long way since its very first dredging contract for Greystones Harbour Development outside Dublin.

“We were really only building up the company when the recession hit in 2008 and when it impacted on our work in Ireland we moved across to the UK where we picked up a lot of business, especially in Scotland,” says Stephen. “Since then, of course, work has also steadily increased here in Ireland.”

So to what does he contribute to the company’s success? “Along with fellow director Jason Farren, we are a tight knit team; all of us work very well together, all with marine backgrounds and all adopt a ‘hands on’ approach to working on site, and we all work closely with our clients.

“If we see a problem or a challenge on the horizon we can promptly address and resolve it with the minimum of delay.”

And of this latest contract, Stephen adds: “We are delighted to be involved in this major project at the Port of Dundee along with GRAHAM. We have worked with them in the past; it is a great company to be associated with.”

Grizzle 2.0 a Big Step Up from its Base Standard Hitachi EX1200

The modified Hitachi EX1200, powered by a standard six-pot 760hp Cummins QSK23-C engine driving standard hydraulic pumps, takes pride of place in the company’s seven–strong fleet of Hitachi long reach excavators, giving Foyle & Marine Dredging, as we mentioned, all the necessary equipment, with its many years of expertise, to construct the most challenging of revetments, in relation to water depth, outreach, and size of armour.

Acquired from the Aertssen Group based in Belgium, which boasts a massive fleet of almost 2,000 excavators, many of them Hitachi’s, the ‘Grizzly 2.0’ is certainly a monster of a machine, primarily designed for Aertssen by specialist machinery company Luyckx to lift and place 10 tonne rock armour blocks 27m from the centre to its slew ring.

Size, of course, matters in complex port development projects, where there is a need for heavier blocks and rock armour to be placed at greater distances from any hard standing.

What makes the Hitachi EX1200 so much different from the standard model is the Triplex Boom which utilises two EX1900 rams in addition to the EX1200 standard rams for increased power at 30 metres reach and 20 metres digging depth. With an impressive load curve for handling rock armour and precast concrete units up to 13 tonnes, the machine truly lives up to its name ‘Grizzly 2.0’.

A significantly wider undercarriage also provides a greater degree of stability, achieved by rotating the H-frame 90 degrees and bolting it to the top of two specially manufactured lengthening beams, resting on the track frames.

The air conditioned, pressurised cab itself remains untouched from the standard EX1200 machine and provides the operator with a comfortable working environment that includes a weight-adjusting cushioned seat, complete with customised suspension settings.

The cab rests on 6-point, support type, fluid-filled elastic mounts. These significantly reduce shocks and vibration for operator comfort, and improve cab durability. These mounts can easily be replaced from underneath the cab floor bed without needing to lift the cab.

A dial type multi-functional controller makes operation easy and intuitive. Frequently used switches are located on the right hand side console panel within easy reach of the operator, while a multi-functional display provides key machine information, performance indicators, and on-board troubleshooting functionality with an integrated dial switch interface and 7-inch, high definition, colour, multi-monitor screen; the display is fitted with an LED backlight to improve clarity and reduce reflective glare.

A rear view camera is located on the machine counterweight so the operator has a wider field of view when checking rearward on the cab’s LCD monitor. This enhances safety during both swing and travel. The operation status icons and rear view monitors can be displayed simultaneously without the hassle of having to switch between displays.

Other Hitachi’s in the Fleet

Other Hitachi machines in the fleet include another standard EX1200, a ZX490, a ZX490 super long front, and a ZX520 long reach, together with a ZX690 hybrid long reach which normally works on the Aoibheann dredger.

Why Hitachi? “In my opinion, Hitachi’s are the best machines on the market; everything about them is great. What’s not to like about them?  Our operators spend long days with the machines and they are big fans of the brand,” says Ciaran.

He adds: “All have been supplied by TBF Thompson – even this latest Grizzly came to us through the dealership. The service and back-up they provide cannot be faulted, and neither can the support we get from Hitachi itself; nothing is ever a problem for them.”

Most of the company’s Hitachi’s are fitted with Hill Engineering’s fully automatic Tefra quick hitch couplers which have been utilised on dozens of projects.

They include a rock armour project for Heron Bros in Helensburgh, Scotland, repairs to the revetment and construction of a new 140m-long concrete toe beam at Portrush harbour’s north pier by civil engineers McLaughlin and Harvey, and more recently on the Dundee Port contract.

Comments Stephen McCormick: “Hill’s Tefra quick hitch coped extremely well, as they have on all our machines and all our projects. We have never had any issues whatsoever.”

He recalled that the first Hill hitch he acquired was for an EX1100 for dredging, which at the time was the only one in Ireland. “We had had trouble sourcing a hitch. All the competitor products were very expensive. Then I came across Hill Engineering. Their hitches are beautifully engineered but simple and robust, and considering all that, very competitively priced.

“They are also superbly flexible. We use them through all our sectors, not just for rock armour and dredging, but also marine outflows, beach reclamation, rock breaking and tug and work boat work.” There isn’t a Hill quick hitch on Grizzly 2.0 – not yet. “We do have one and it will be fitted in the not too distant future.”

A Topcon Positioning system has also been installed recently on the EX1200 and says Stephen: “We are just getting familiar with the system, but so far it is proving to be an invaluable tool; we are very impressed with how easier it makes our work.”

Grizzly 2.0 will be working on the Dundee Port project for another couple of months, but when that contract is completed, it will not be long before its back in another part of the country employed on what it does best.