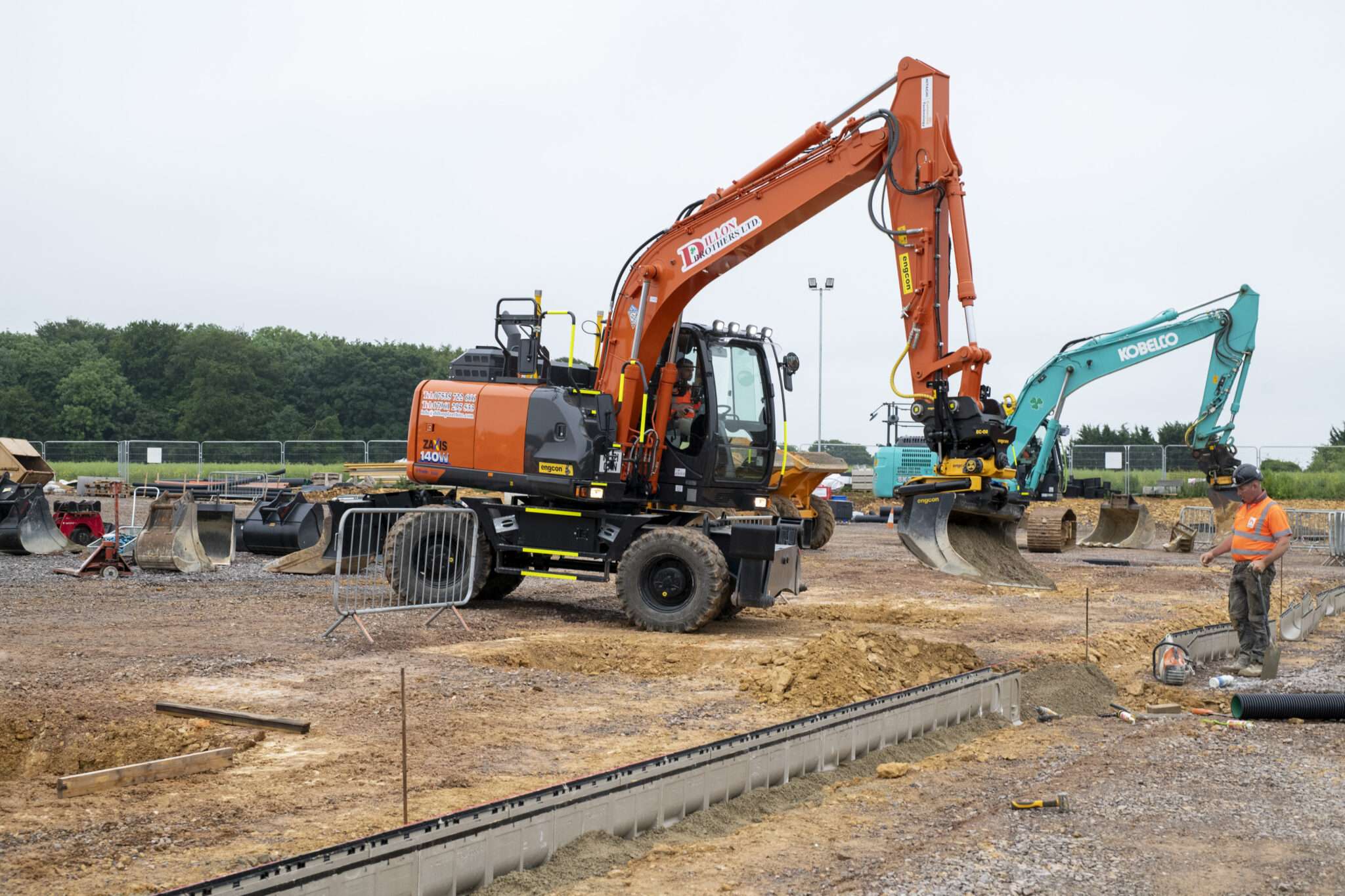 Call them what you will; mobile excavators, wheeled excavators or even ducks, the use wheeled excavators has increased massively over the last decade in the UK. Once the preserve of road maintenance teams, better site infrastructure and better off road abilities has seen the wheeled excavator market boom. Add into the mix the popularity of the tilt rotator and you have a very handy, versatile machine capable of undertaking a wide range of work both on road and, if the ground conditions aren’t too bad, off road too.

One company who have recently invested in a new wheeled excavator are Dillon Brothers from Twickenham. Originally from County Kerry in Ireland, Mike and James Dillon still operate a couple of machines back home but since 2012 have been predominately based in in Middlesex.

The new excavator is a Dash-6 Hitachi Zaxis 140W sold to them by Martyn Hare from HCMUK. The company runs a small but modern fleet of equipment on projects around the UK with all the excavators coming from Japanese manufacturers such as Case, Kubota and Kobelco as well as several Hitachi machines. The excavator fleet is supported by a range of Thwaites cabbed dumpers. “We like the build quality and reliability you get form a Japanese excavator.” Mike explains “You know what you are getting and there is always a very good residual when it comes to swapping the machines.”

AWESOME EARTHMOVERS caught up with Mike on a large industrial project the company are underway within Tetbury, Gloucester where some of the existing fleet were joined by the new 16 tonne Hitachi 140W. “We have three or four projects running at any one time around the UK.” Mike explains “At the moment the order book is full, and we are still getting enquiries for more projects, the state of the building industry seems to be very good at the moment.”

The new Hitachi joins the fleet and is the first wheeled excavator on the fleet from the manufacturer. “We wanted to take a machine that was well specified and able to do a multitude of jobs around a busy site.” Mike comments “We have run tilt rotators for a number of years on some of our machines and machine control systems too. With the duck we wanted to combine both of these into a package, and it was Hitachi that provided us with the best overall deal at the time.”

As seems typical for wheeled excavators on sites these days, the first job for the Zaxis 140W was with a set of pallet forks. “We find that the duck replaces a telehandler on many of our sites these days as it is so versatile.” Mike explains “You can have a telehandler sitting doing nothing for half a shift every day whereas the duck just picks up the forks, does what it needs to do, then goes back to digging. It really is a jack of all trades machine.” Unloading a full artic load of drainage material was done in minutes without operator Matt Hawkins having to manoeuvre the machine excessively letting the tilt rotator do the hard work. “We have run Rototilt in the past but favour Engcon for a number of reasons.” Mike explains candidly “We have three of the Engcon systems now and find them to be ideally suited to our job. This latest EC214 has been specified with EC-Oil on a Q-Safe QS60 hitch and GRD20 gripper cassette. It really is a great unit. We also like the fact that it has the Eps system with it which integrates well with the Trimble Earthworks package fitted to the machine. It allows us mm accuracy when trimming stone.” The EC-Oil allows Matt to change any hydraulic attachments over quickly and safely from the comfort and safety of the cab with no risk of losing oil from the couplings during changeover. Alongside the pallet fork, the company has a hammer and sweeping brush attachment which are ideally suited to the EC-Oil set-up. The DC2 control system has allowed the Dillon team to select joystick steering through the MIG joysticks although they have kept the Hitachi’s steering wheel in place for Matt’s preference.

Andrew Badham, Sales Manager for Engcon in the South West commented; “We have been working with Mike for several years now and he has been a great advocate for tilt rotators. This EC214 will be Dillon Brothers’ third Engcon set-up with each one pushing the limits of what you can do with an excavator. The lads at Dillon Bros are a young, dynamic and forward-thinking company who have really taken to the Scandinavian way of digging.”

Power to the machine comes from a 4-cylinder Deutz diesel delivering 140hp meeting Tier5 emissions regulations through SCR and DPF technology. “We’ve had very little in the way of mechanical issues from our Hitachis in the past.” Mike explains “We can’t foresee this machine being any different as the Deutz powerplant is a tried and tested performer.”

Sitting at the premium end of the market, the Hitachi cab is well liked by the operators on the team. “It is well made, well insulated and allows for good all-round vision from the seat.” Matt says, “The controls are well laid out and easy to use. The touch screen allows me to change attachment settings very quickly and doesn’t require you to go through a whole line of sub menus before you find them.”

The Zaxis 140W sits on a modular undercarriage with Mike and James specifying the blade and outrigger combination. “We wanted to ensure we can work 360 degrees with anything on the dipper.” Mike said, “This set up gives us the ability to do this in safety.”

The digging equipment strays slightly from the Swedish digging style as it is a standard mono boom connected to a 2.52m dipper. “We felt that for our work, the two-piece boom was an expensive addition that wouldn’t give us a great deal of extra bang for our buck.” Mike explained.

Where the company has invested significantly is in machine control. Already running three machines with Trimble Earthworks, the decision was taken early on to specify the duck with a system too. “We find that it is being asked for more and more from clients these days.” Mike comments “We run the three systems already from Trimble and find them to be a great addition to the fleet allowing our operators to work independently and accurately at all times.” The combination of tilt rotator and machine control has significantly altered the way the company operates and has boosted both production and accuracy figures on site. “Whilst the productivity gains are great.” Mike comments “We feel we are safer now as we don’t need anyone around the machine.”

Sitech Uk and Ireland Sales Manager Carl Parsons comments; “Dillon Brothers have been investing in Trimble Earthworks 3D machine control systems for a number of years after seeing its benefits on their first purchase. The most recently 3D Earthworks system sees them adopt a very Scandinavian workflow by fitting the system to a Hitachi wheeled excavator with a rotating hitch. This allows them to utilise their 3D machine control system in many more situations to drive a faster return on their investment.  This new way of thinking is paving the way to further investments in Trimble Technology.”

“So far we have been impressed with the whole set-up.” Mike comments “It’s proving to be a reliable and productive machine and as long as it carries on this way, I can’t see why we won’t look at Hitachi for any future purchases we make.”