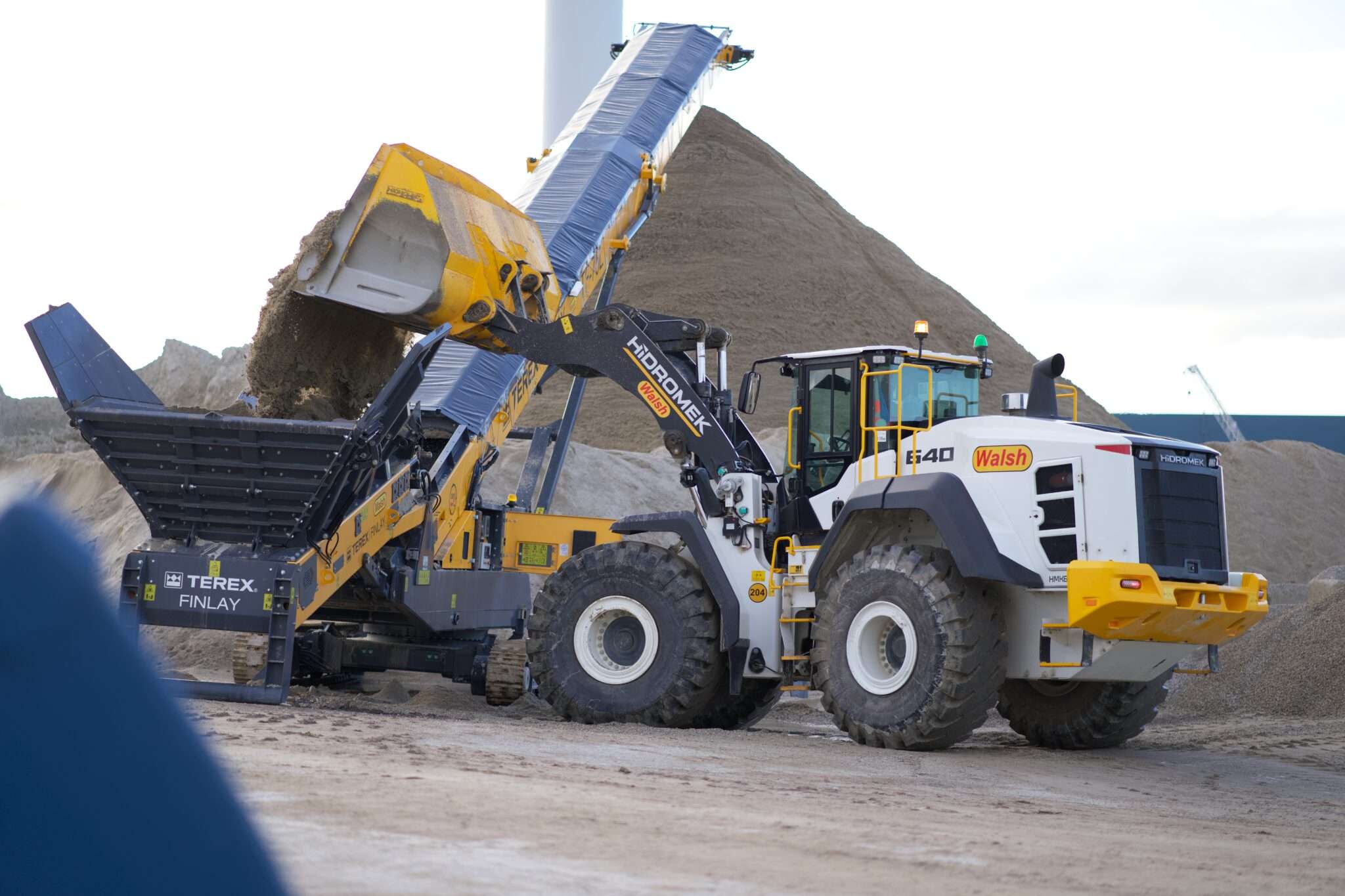 One could be forgiven to think that the boys at S Walsh & Sons based at Rainham in Essex are big Hidromek fans; at last count, they had 12 Hidromek machines in the fleet, with five more on order and a couple currently on hire.

Walsh has played a part in virtually all of London’s major schemes – from the Channel Tunnel Rail Link (HS1), Canary Wharf and the 2012 Olympic park to Crossrail and Thames Tideway, and at the beginning of 2021 they signed a 20 year agreement with the Port of Tilbury to help to meet the capital’s demand for construction materials in a more sustainable way.

The deal enabled Walsh to create two new freight hubs at the port – a logistics terminal with an aggregates processing plant and a rail-linked freight facility; transporting aggregates by river and rail significantly reduces road miles and traffic congestion and represents a fraction of the carbon emissions of road haulage.

The fleet of Hidromek wheel loaders and excavators is certainly earning their keep, working long hours, some of them employed at the port where Walsh brings up to 400,000 tonnes of secondary aggregate into Tilbury by sea and river each year from china clay producer Imerys in Cornwall. This by-product of the china clay industry, which would otherwise be discarded, is rated as one of the most sustainable aggregates available. Combined with transportation by marine freight, it achieves a greener supply chain for built development in London and the South East.

In March 2021, the company invested £14m to install a new processing plant, supplied by Molson Equipment & CDE Group, to wash and grade the aggregate for supply to their customers across the South East of England. Products include rock armour, Type 1 sub-base, single-sized granite, coarse sand, fine mortar sand and 6F5 recycled aggregate.

“Four years ago I took a Hidromek 220 out on trial, bought it and three days later

it was loading a crusher back at our yard in Rainham.”

How the Hidromeks, supplied by the TJC Group in Bedfordshire, ended up in the fleet is a story in itself as Operations Director Ross Rolfe explains: “We had a workshop for our haulage fleet at the rear of the TJC premises and one day four years ago I saw he had a couple of wheel loaders in the yard, including a brand new tracked 22 tonne Hidromek 220 which attracted my attention, not least because it had 600mm pads and a good robust, heavy duty bucket, so I took it out on trial, bought it and three days later we had it loading a crusher back at our yard in Rainham and we haven’t looked back since.”

Around that same time in 2017 Walsh became part of the GRS Group, a nationwide trader and transporter of construction aggregates, building products and waste materials who have access to the widest range of materials in the country and has grown to become a key supply-chain partner to many major infrastructure schemes and leading builders’ merchants.

Today, Walsh’s fleet includes six HMK 640 wheel loaders, five HMK 22 tonne excavators and a HMK 31 tonne excavator, plus a couple of 14 tonne machines and a 50 tonne HMK 460 tracked excavator which are on hire.

When we called at the new wash plant at Tilbury Docks there were two HMK 640s employed, one loading Cornwall granite into the wash plant and the other placing the product on to a fleet of waiting trucks. So far, this year more than 300,000 tonnes of material has been processed at the plant.

The Hidromeks are also used to load aggregates on to the company’s 20 strong fleet of barges, which deliver the product along the Thames River to customers in London; in May, CEMEX signed a five year partnership with Walsh to transport aggregates from CEMEX’s wharf at Dagenham to its readymix plant at Fulham.

The use of a river barge to transport these materials takes trucks off the road, helping to ease congestion and reduce emissions; at the quayside, the Hidromek shovels place the aggregate on to Terex Finlay stacker conveyors which in turn load the barges. Each barge can carry 400 tonnes which saves the equivalent of 20 HGV lorries travelling across the centre of London; the biggest barge in the Walsh fleet comes in at around 3,000 tonne, the smallest about 500 tonne.

Commented Lex Russell, Materials Director for CEMEX UK, at the time of signing the agreement: “Our Fulham readymix plant is a vital part of our London operation so it is important that it receives a consistent and reliable flow of materials from our Dagenham Wharf. Using the Thames provides a congestion-free, sustainable route through the centre of London and maximising the opportunities for river freight was encouraged in the Greater London Authority’s strategic plan for the city.”

Added Joe Gifford, Managing Director of Walsh: “This is a win-win, not just for CEMEX and Walsh, but also for freight transport, construction and the environment. Moving essential materials via the River Thames has numerous advantages – reducing lorry miles, less congestion, lower emissions – whilst at the same time helping to meet London’s demand for materials for redevelopment and regeneration. We’re proud to be working with the team at CEMEX to deliver that.”

Back at the company’s crushing yard in Rainham, a Hidromek HMK 220, along with a HMK640, is employed at the site where about 300,000 tonne of material is processed annually; one of the Hidromek’s managed to handle a record 5,000 tonne in a single day.

Hidromek design wins awards – and the full approval of operators

The Hidromek machines, with their spacious and comfortable cab and smooth and efficient hydraulics, have certainly made a big impact on the company’s operators, who favour them over other leading brands, and not without good reason.

All controls in the cab are placed on the operator console integrated into the air suspended heated seat. This console can be moved independently of the seat, allowing the operator to find the best and most comfortable working position, while the loading shovel’s OPERA control unit, specially designed for Hidromek construction machines, allows the operator to control many of the machine’s functions from a single point; functions such as A/C, lighting, radio, information display, etc. can be managed with the 8″ high definition multimedia touch screen, which also serves as the display of a rear view camera when you shift to reverse. LED lighting on the cab provides two times more light than normal while working in dark or inadequately illuminated areas – and there’s plenty of space for the operator to store his bits and pieces.

With axles and components specifically used for demanding working conditions, and with a heavy duty standard bucket with a 4.2 m³ capacity, the HMK 640 wheel loaders which we saw in action are powered by a Mercedes engine having 324 hp and 1600 Nm torque, providing high loading capacity at low fuel consumption in a short cycle time. It’s not surprising this Hidromek model has won international design awards such as Reddot Award, German Design Award, and the Good Design and Automotive Brand Contest.

The service provided by the TJC Group was another prime reason for Walsh’s decision to invest in the Hidromek brand, as Operations Director Ross Rolfe explains: “We operate 24 hours a day, so it is vital that we have a back-up support package to keep the potential for any downtime to an absolute minimum, and the team at TJC cannot be found fault with. Downtime over the last three years amounted to something like just three days!

“The TJC Group carry out all our servicing needs, apart from replacing tyres and broken windscreens. They have a good apprenticeship programme to ensure they have well trained engineers always on hand, which gives us confidence in their ability to meet our support requirements. They are only ever a phone call away, even on Sundays, and they always carry a good stock of parts, so availability is never an issue, even in these challenging times of shortages and supply issues.”

Commented Richard White, Managing Director of TJC Plant: “We would like to thank Walsh for trusting Hidromek and TJC with buying into the brand. TJC prides its self on its service and back up which gives the customer the confidence in buying an unknown brand.

“99% of our Hidromek customers  have seen the quality of the product and the backup TJC provide and have then taken more units. We are looking forward to 2022 with multiple orders in the system from new and existing customers, with our largest order from Walsh for an additional five units.”

Meanwhile, Hidromek have launched a new smaller loading shovel, the HMK635 powered by a Stage 5 282 hp engine, weighing in around 20 tonnes with a bucket capacity of 3.5m3. TJC will receive the first unit in February and already have over 15 demonstrations lined up.