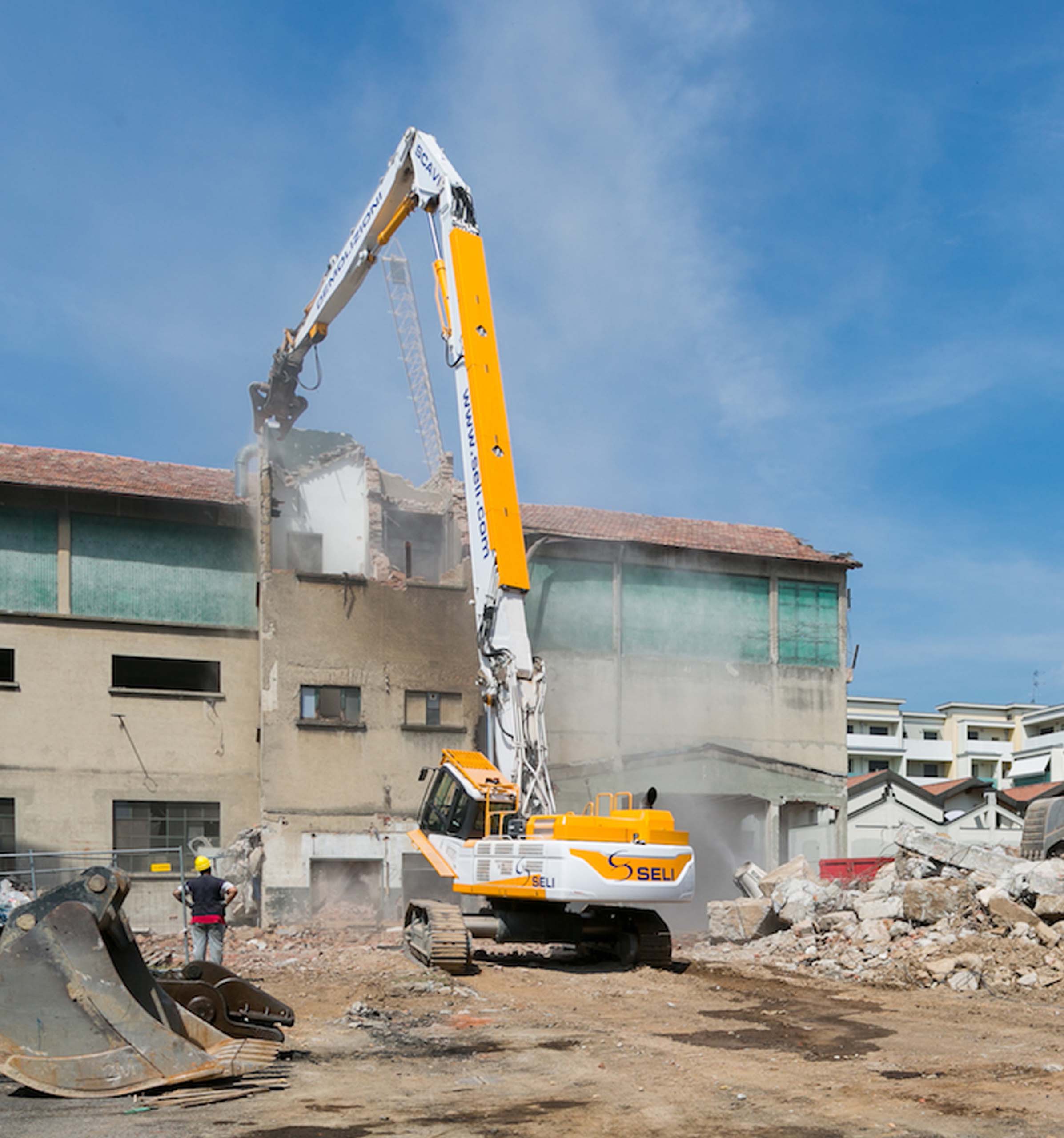 A Doosan DX530DM top-of-the-range demolition excavator has been used in a top down demolition of part of an historic manufacturing plant in Lissone in Monza in Italy. The site is owned by Brugola OEB Industriale S.p.a., the world leader in the production of fasteners and other parts for the automotive sector.

OEB was formed in 1926, based around the technical expertise of its founder, Egidio Brugola, the inventor of the Allen screw, as a factory for making washers, special engine rings and other components. Over time, OEB has continued to expand sales abroad, channeled not only towards the European market but also further afield, so much so that in 2006 a logistics centre was opened in Detroit in the USA, which underpinned the worldwide expansion of OEB in the sector of automotive components.

OEB has recently chosen to modernize and expand the historic site in Lissone, involving the demolition of a production facility, now abandoned for some years, to make way for the new headquarters of the company, as well as a new pedestrian square, dedicated to Egidio Brugola. This is an important urban project, in the centre of Lissone, which will revive an area of ​​the city located in the immediate vicinity of the historic centre and which will increase the living standards of the entire neighbourhood.

The contract for the demolition was awarded to Seli Manutenzioni Generali Srl of Monza, a company with over 50 years of experience in the construction sector, which has seen significant growth in its recently formed Business Unit dedicated to demolition and decommissioning.

The company’s DX530DM, the largest demolition excavator produced by Doosan, with a 29 m boom and a truly impressive working range, was the ideal machine for a contract of this magnitude. Like all Doosan demolition excavators, the DX530DM is particularly flexible, allowing the demolition arm to be swapped for an excavation arm and vice versa, thus making it possible to perform different jobs on the same site, with the same machine.

All Doosan demolition excavators are also equipped with a unique high visibility cab that tilts by up to 30°, specifically designed for these high reach applications. Another important feature is the extendable undercarriage which guarantees optimal stability, which is essential on sites of this magnitude. The undercarriage width can be reduced hydraulically to make transport easier.

The DX530DM equipped with a long arm and demolition grapple, carried out the entire demolition from above of two industrial buildings consisting of a tower section, 20 m high, and two single-storey buildings, that made up the old OEB factory.

The DX530DM excavator, customized in the white and yellow colours that distinguish the Seli Manutenzioni Generali fleet, made it possible to perform a demolition that overcame the problems involved, ensuring surgical precision in completing the work in just eight working days.

The demolition work carried out with the DX530DM demolition excavator was continuously supported by a Doosan DX235LCR-7 excavator which, in alternating phases, dealt with the crushing and removal of steel from the demolition waste, as well as the subsequent loading of materials onto trucks destined for recycling plants.

The use of the most modern and innovative equipment has guaranteed an extremely reduced environmental impact, both in terms of noise and dust emissions, allowing to minimize the disturbance caused to the residents in the area and the district’s commercial activities and services, limiting vibrations and noise propagation, for the entire duration of the demolition phases.

In addition to sales and rental, DMO offers specialized technical support, both at the company’s 2000 m2 workshop in the new Melegnano site, and directly on site, with the help of mobile workshops. This service and the spare parts support, is very much appreciated by Seli, guaranteeing excellent performance on every construction site.