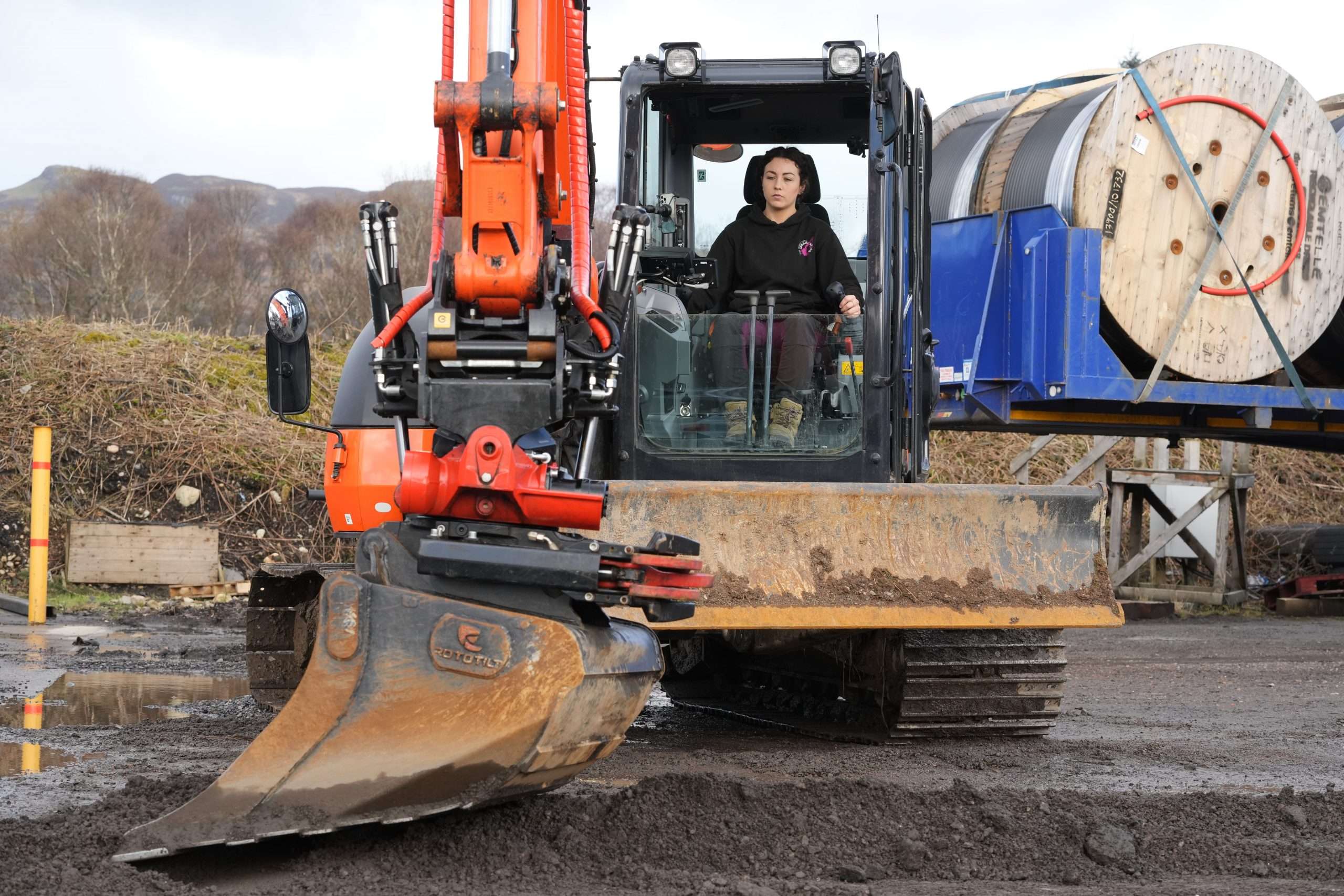 Awesome Earthmovers magazine caught up with Amy Underwood AKA the_digger_girl

Hailing from Dalmally in the Northwest of Scotland, Amy Underwood works alongside her father John in the family business, John Underwood Plant Hire. The company, although small, is a thriving operation running a variety of plant and equipment up to 14 tonnes in weight and sourced from leading manufacturers such as Hyundai, Kobelco, and Kubota. Self-sufficiency is the key to survival and through operating their own beavertail truck, Amy and John can react quickly should any jobs require their immediate attention. The business is kept busy on a variety of jobs ranging from roadworks and housing sites to ditching and small hydro schemes.

Amy has grown up in the industry, gaining experience and qualifications along the way and first started out with her dad after not knowing exactly what to step into when leaving school. “I did my plant operatives apprenticeship in 2012/2013 at The National Construction College in Norfolk. I received 4 apprentice of year awards in that time. Then at the age of 18 I went on to train and complete a course for my HGV licence,” says Amy.

Whilst spending plenty of time operating the machines for her dad, Amy had also started building up a social media presence under the guise of @the_digger_girl. “I only started doing social media towards the end of 2019 with an Instagram account, mainly because my friends weren’t interested in seeing pictures of what I did on a daily basis.” Shortly after starting her social media journey, the global pandemic hit, and Amy found her followers increasing on a massive scale. These new followers included other females working within the industry thanking her for posting and voicing their support for showing the world that the construction industry isn’t just for men. “I chatted with so many people in the industry over the following months.” Amy explains: “Unfortunately the pandemic meant I’d not really been able to speak to any of my followers face to face – it’s all been on social media.” The subsequent months saw Amy’s Instagram account top the 116,000 mark with her TikTok account growing even faster with over 260,000 followers.

Initially the sites were launched to document the work she undertakes with her dad but have since grown to promote female operators within the male dominated construction industry. “I was recently at Scot Plant when two wee girls came up to see me and said that they’ve seen my videos and when I asked what they want to be when they’re older, they replied: ‘a digger driver!’ When I was younger there was never that – I never saw any women driving diggers as there was no social media to see girls driving either.” Scot Plant was also the location for Amy to launch her range of Digger Girl merchandise which sold like hot cakes during the event.

The growth in Amy’s social media following has opened new doors for her too with recent guest operating shifts at various trade shows for Hyundai and Rototilt. “Having these opportunities is great for me personally, but I also see it as an opportunity to promote the construction industry to girls around the world. It’s about giving the industry a positive outlook for any girls who want to look at doing something different.”

Amy regularly operates the company’s Kubota KX080-4/2 excavator equipped with a Rototilt tiltrotator. The Kubota has recently received an eye-catching livery update with leading image enhancers Brandfixx applying one of their reflective liveries to the machine’s upper structure. “I wanted the machine to stand out a little more than the norm.” Amy points out, “It certainly does that now!” The addition of the Rototilt to the machine has been another step in Amy’s learning: “I’ve operated them for small stints and found them to be a great addition to any machine. The Kubota is a different machine with the Rototilt and makes doing certain tasks a lot easier. It makes you think differently as to how jobs are done. One thing I have found is that it makes you far more productive.”

Still at a young age, where does Amy see her future? “I honestly don’t know! I love what I’m doing with dad, the work is interesting and enjoyable and changes almost daily. We’re very busy at the moment with a variety of projects on the go. I’m in the very lucky position that should I be asked to do a social media project somewhere in the country, I can usually take a day away from work to attend. I suppose, just as long as I’m happy, I’ll take every day as it comes. I love what I do, I don’t know what else I would do. I would like to see more girls coming into the industry and that is changing every month. There is a huge untapped market out there for contractors looking for potential operators, mechanics, surveyors, and the like. The industry has changed massively and is far more inclusive these days. If it wasn’t for my dad, I wouldn’t be doing what I do because I didn’t know I could.”