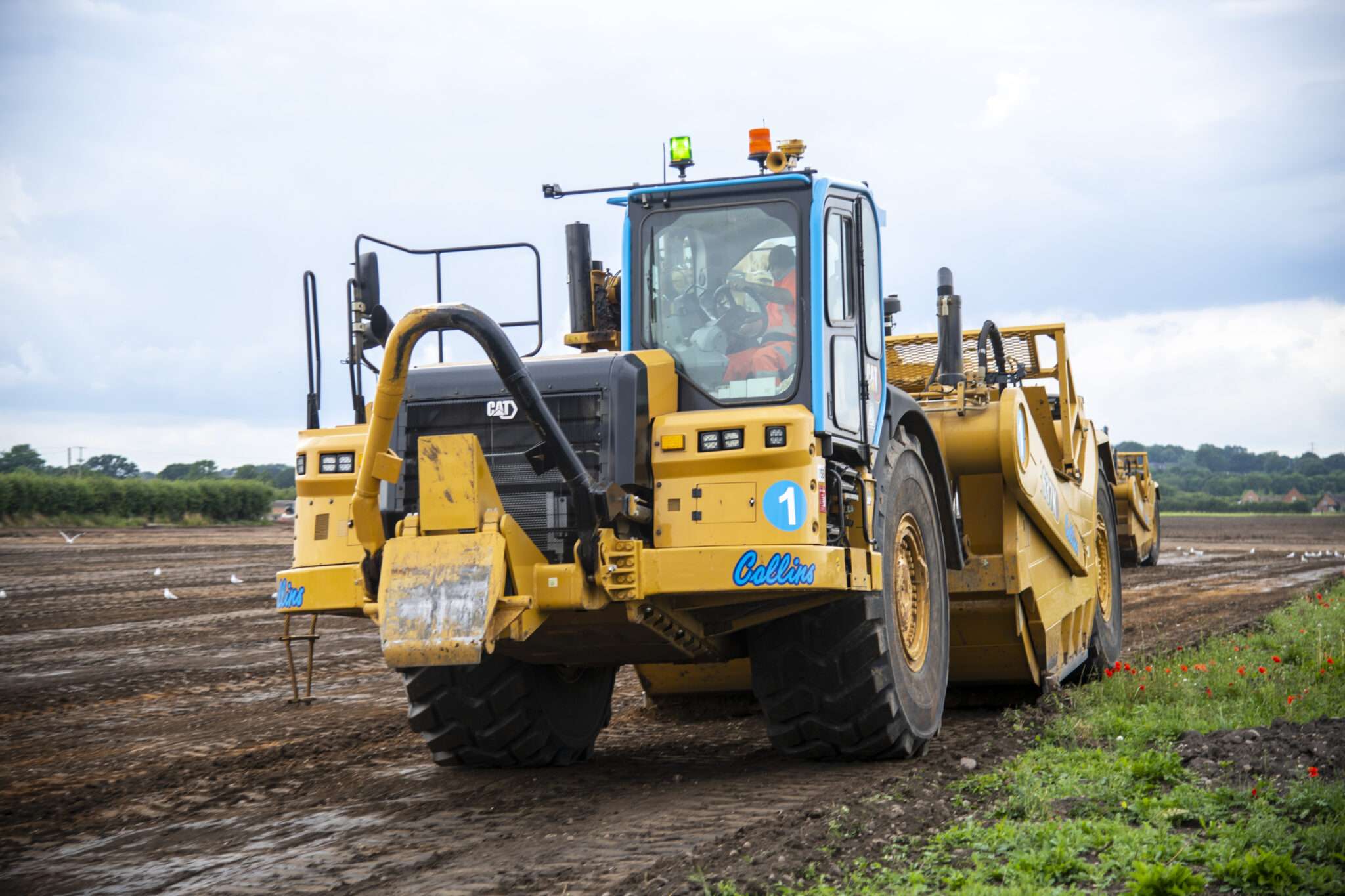 As one of the largest earthmoving contractors in the UK, Collins Earthworks has hit the headlines on a number of occasions over the past few years. They were the first company in the UK to take the Volvo A60H truck and were also first on the large excavator front with the EC750E and EC950F. Caterpillar firsts have included the new generation D6XE dozer and most recently four 637K scrapers.

Already boasting a muck shifting capacity many would dream of; ongoing commitments with existing clients has led the company to invest in the first new twin engine scrapers to enter service in the UK for over a decade.

Motor scrapers have fallen out of favour with mainstream contractors for a handful of reasons. The demise of large-scale earthmoving contracts such as motorway work and opencast mining, both big users of this type of machinery, along with their shorter working season has driven contractors to replace them with excavators and dump trucks which can be used almost year-round. Add in the fact that experienced scraper drivers are getting fewer year on year, their use had thought to have been limited to the handful of companies running older versions.

Collins Earthworks has bucked that trend by taking four of the 28m3 capacity twin engine monsters. Not the largest in the Caterpillar range, the 637K is still a big lump of iron when you put them out on site.

Originally taken to the company’s huge Northampton Gateway scheme, the scrapers have been relocated to another project for the same client at Minworth in the West Midlands. The project particulars include a large cut and fill operation designed to allow the construction of new warehousing along with associated new infrastructure such as roads, drainage and landscaping works. The first task, and ideal for the scraper teams was the stripping of large areas of topsoil ahead of archaeology works. “We don’t usually undertake this much archaeology work ahead of our usual muck shifting work.” Site Manager Alex Berry explains “But as the planning consents require this, the scrapers were identified as being able to undertake this work quickly and effectively with very little disturbance to the underlying material which may contain any artefacts.”

Already having two 100t excavators in their fleet, why change tact and invest heavily in a totally different method of muck shifting? Jamie Dobson, Contracts Manager for Collins Earthworks explains; “We have several large scale earthmoving contracts starting and due to start over the coming months and whilst we know our capabilities with our excavator and truck combinations, some of these cut and fill projects required a different approach. Whilst we are still a relatively young company compared to some, we have experienced people within our teams who have worked with and alongside scrapers prior to joining us. Scrapers do have a shorter working season depending on the weather and they are best suited to ground conditions with more of a granular make up as opposed to rock, but with the contracts we have ahead of us, we saw the opportunity to take advantage of their speed of operation and lower cost per cube to add four machines into our fleet.” The drive to obtain high productivity from their kit has led Collins to equip the four machines with machine guidance systems from Trimble. A basic version of Earthworks supplies information to the machines allowing them to quickly and efficiently remove material to a desired level without the risk of over or under-digging. “We run a large fleet of machine guided and controlled machines allowing us to be very accurate in our material removal.” Jamie explains “The scrapers are just another part of our arsenal and to keep them producing accurately, we decided they needed the Trimble systems adding.”

The four 637K scrapers, whilst not the largest in Cat’s range, are still large machines. Measuring over 16.5m in length and a shade under 4m in width with an unladen weight of just over 54 tonnes, each scraper when in push pull configuration can be fully loaded with over 37 tonnes of material in under a minute. That’s almost 80 tonnes of material in two minutes and away down the haul road.

Caterpillar’s model numbering system is slightly strange as single engine models end in 1 ie; 621, 631 but their twin engine versions end in 7; 627, 637. Meeting Tier5 regulations the tractor carries a C18 engine delivering 570hp with the scraper sporting a smaller C9.3 diesel delivering 290hp. Starting the engines needs to be followed in an exact sequence; tractor then scraper with both engines controlled from inside the operator’s cab. An 8-speed powershift transmission drives the tractor, whilst a 4-speed torque convertor drive does the same for the scraper unit, both with planetary powershift with the rear engine electronically controlled from the front end. Both engines are accessible for servicing with the large mudguards over the rear wheels providing a reasonable working platform, the tractor on the other hand is a little tighter for space and access. Well placed ladders provide access to all points both front and rear. Thankfully, the fuelling process has been made easier on the K models with a fast flow system accessible off the ground allowing the huge 1400 litre tank to be filled quickly.

The cab on the Caterpillar K series scrapers is a far more comfortable place than on previous models. Slightly smaller than excavator cabs, the angled seat allows a good view of the cutting edge without the operator having to twist too much. The wrap around dash and single joystick operation has made the K series far more ergonomically acceptable for operators. The steering system design on the 637K requires significantly less effort from the operator resulting in decreased operator fatigue and a more efficient operator. Visibility from the cab has also been improved in a bid to reduce operator fatigue with Collins also fitting a 360-degree camera system to the machines. Despite its lack of size, the four operators regularly on the scrapers for Collins have said they are happy with their mounts. Operator of scraper number 1. Jake Parnill said; “Once you are in the seat and everything is adjusted to suit your driving position, everything is close at hand. The seat is comfortable and takes out much of the bounce when coupling up whilst the cushioning on the neck also helps a lot. A good heater, air conditioning and easy to use controls, many of them working automatically at the press of a button, brings them right up to date. The hardest part in learning how to operate these machines is feathering the front and rear engines with their separate accelerator pedals.” Access to the cab is first rate thanks to a set of hydraulically folding steps. Not your usual bolt-on systems, the ones on the scrapers are built into the frame of the tractor and fold away very neatly when retracted.

The four machines have been specified with Cat’s push pull system allowing the scrapers to hitch up in pairs to reduce wheel spin when loading and decrease the loading time significantly. The large cushion hitch on the rear scraper reduces the jolt when hitching up with the front unit before the bail is lowered over the rear hook.

With scrapers not being a popular muck shifting tool for many a year, operators with experience in their operation have also disappeared. Collins didn’t worry too much about this and recruited potential operators from their own workforce. “We have some very capable lads on our team.” Jamie Dobson, Collins’s Contracts Manager explains “We asked them if they would be interested in operating them with a view to get eight lads trained up and had very good feedback. Finning sent their driver trainers out for a week showing the lads the best way in which to operate the kit. In all fairness, the lads picked it up very quickly. They are still learning and will be for a while, but they have settled into the task very well. We are also very lucky to have Jamie Elliott working with them on the D9T. He has had years of experience working on opencast work with scrapers for the likes of Budge and Crouch, so he knows exactly how to get the best out of them.” Jamie and the four scrapers are in radio contact at all times and whilst he is working a hundred metres or so away, Jamie still keeps an eye on the teams. The four operators, No1; Jake Parnill, No2; Nathan Worthington, No3; Ian Northedge and No4; Mckaulee ‘Macka’ Malin have all come from either trucks or dozers within the Collins fleet and are all very happy with the new machines. They all say they have taken a bit of getting used to, but are looking forward to the large cut and fill operation they are heading to over the next few weeks.