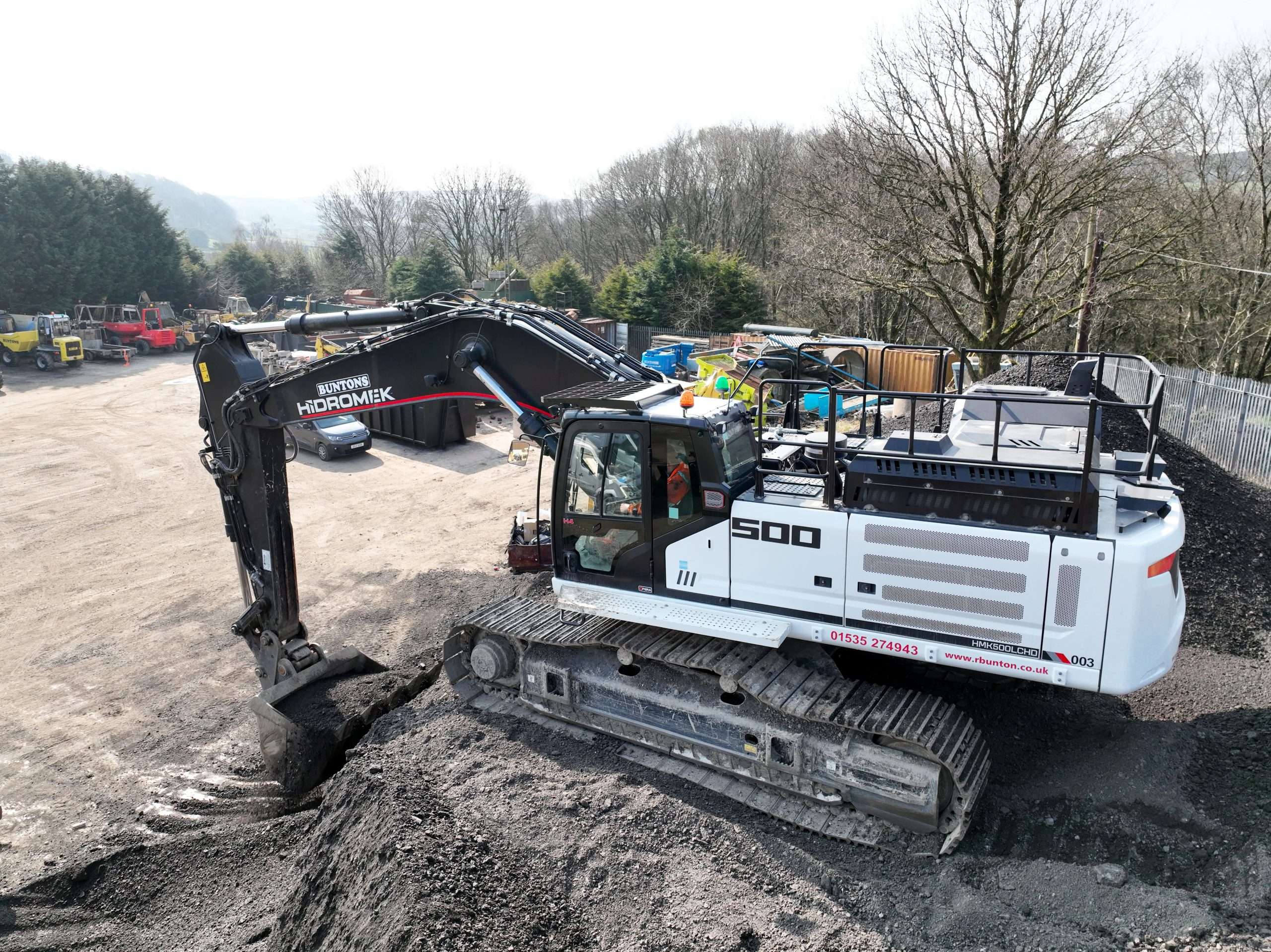 Bunton Plant Hire’s investment in the first Hidromek HMK500 LC HD crawler excavator to arrive in the country is paying off.  The 50-tonne machine, which is the biggest in the Hidromek range, is attracting plenty of attention from operators.

The addition of the HMK500 to the company’s already extensive fleet means the Northern dealers for Hidromek machinery in the UK can now offer the Turkish manufacturer’s complete range of excavators to its growing customer base.

Available for hire or demonstration purposes, this latest machine in Hidromek’s H4 Series is also being put to good use on some of Bunton’s own construction projects.  The Bradford based family run business, established in 1970, specialises in operated and self-drive plant hire along with new and used equipment sales, bulk excavations, aggregate supplies, recycling, and crushing and screening.

The company also operates a groundworks division which services landscaping, civil engineering, utilities, drainage, and equestrian projects.  Bunton has also completed both major and minor works for the commercial, local authority, and private sector, working on behalf of clients such as JN Bentley, The Sirius Group, Morgan Sindall, VHE Construction and Balfour Beatty.

Hidromek has made some significant improvements in the arm and boom structure and undercarriage by using more durable materials which means the HMK 500 LC HD has a more robust structure making it ideal for tough environments such as quarrying and large construction sites.

Bronze-graphite bushings used in boom arm and boom frame connection points increase the lubrication period and greatly prevent the wear of the pins because graphite has a very high grease absorption and retention capability.

“Feedback from customers who have had it out on hire or demonstration has been very impressive,” says Bunton’s Richard Goodyear. “Indeed, one client who had been trialling it tells us it was more versatile than an equivalent size machine they were using to unload materials. With the Hidromek they didn’t have to employ a crane to place the load into position on the site as they could do it all with the HMK500.”

A fuel-efficient excavator that packs a powerful punch, with a comfortable cab providing an excellent working environment for the operator

Richard adds: “Other customers have been attracted by the Hidromek’s build quality as the manufacturer uses leading brand components including Isuzu engines and Kawasaki pumps. They’ve also been pleasantly surprised by the machine’s power, its fuel efficiency, and its comfortable cab which provides an excellent working environment.”

Richard continues: “When we took on the Hidromek franchise in 2016 there was some initial resistance because the brand wasn’t that well known. In the beginning, we were able to sell some of our ex-fleet excavators which created an increasing interest in new models. Since then, the brand has been a solid performer for us.”

So, what about availability at a time when there appears to be a general shortage of stock across the industry? “Fortunately, we carry a good stock of the Hidromek brand. We are adding more machines across the range, so availability isn’t an issue,” says Richard.

A powerful, strong, and well-balanced machine, the HMK500 has been in steady demand since it was added to the hire fleet. “When clients see how it is performing for them, they tend to hold on to it for weeks at a time; their feedback has been nothing but good.” Richard states.

It can be configured to a customer’s individual requirements. This particular one includes a 6.9m boom and a 3.3m dipper. Included too, are rear and side cameras providing excellent visibility by minimising blind spots, while LED headlights significantly improve night vision.  In addition, there are also red handles and warning labels providing maximum safety for the operator, further enhanced by the provision of an automatic starting horn, swing warning system, and travel warning system.

The operator’s work environment is also made more comfortable thanks to a seat that is heated, air suspended and has a 35 degrees adjustable backrest angle.  Other features include proportional control pedals and joysticks, throttle control dial, interior light, cup holder and heating-cooling box.  In addition, there is an air conditioning system which can automatically adjust itself according to the ambient heat in the cab.

The cab, which sits on six silicone dampers to reduce noise, shock, and vibration, provides the operator with everything he needs to make his working day less stressful. An 8″ touch control panel, for example, is positioned just where the operator can easily reach it.  The large screen easily enables him to control the machine features and access all the relevant machine information such as atmospheric pressure, turbo boost pressure, fuel pressure and hydraulic pump pressure.

It also allows the operator to adjust the flow required for any attachments without leaving the cab.  They can save this information for up to 20 different attachments, while there’s a power boost function that gets activated automatically in the conditions when the machine needs extra power.

A configurable automatic stop system provides fuel saving by closing off the engine after the machine is on idle, while a safe fuel transfer feature stops the pump automatically when the tank is full.  This feature also gets activated when the pump does not transfer fuel for 30 seconds.

The machine comes with Hidromek’s Opera Control System, an easy-to-use interface that facilitates communication between the operator and the machine. The operator can easily switch between menus in Opera, change settings, such as hydraulic flow, and check the status of the machine, including pressure, temperature, and engine load. The information and warnings on the instrument panel are always easy to see and control, thanks to the positioning of the Opera interface.

Other functions that can be controlled by means of Opera include lights, windscreen wipers, rear-view camera, the integrated music system, the auto-stop control, and the preheating system.