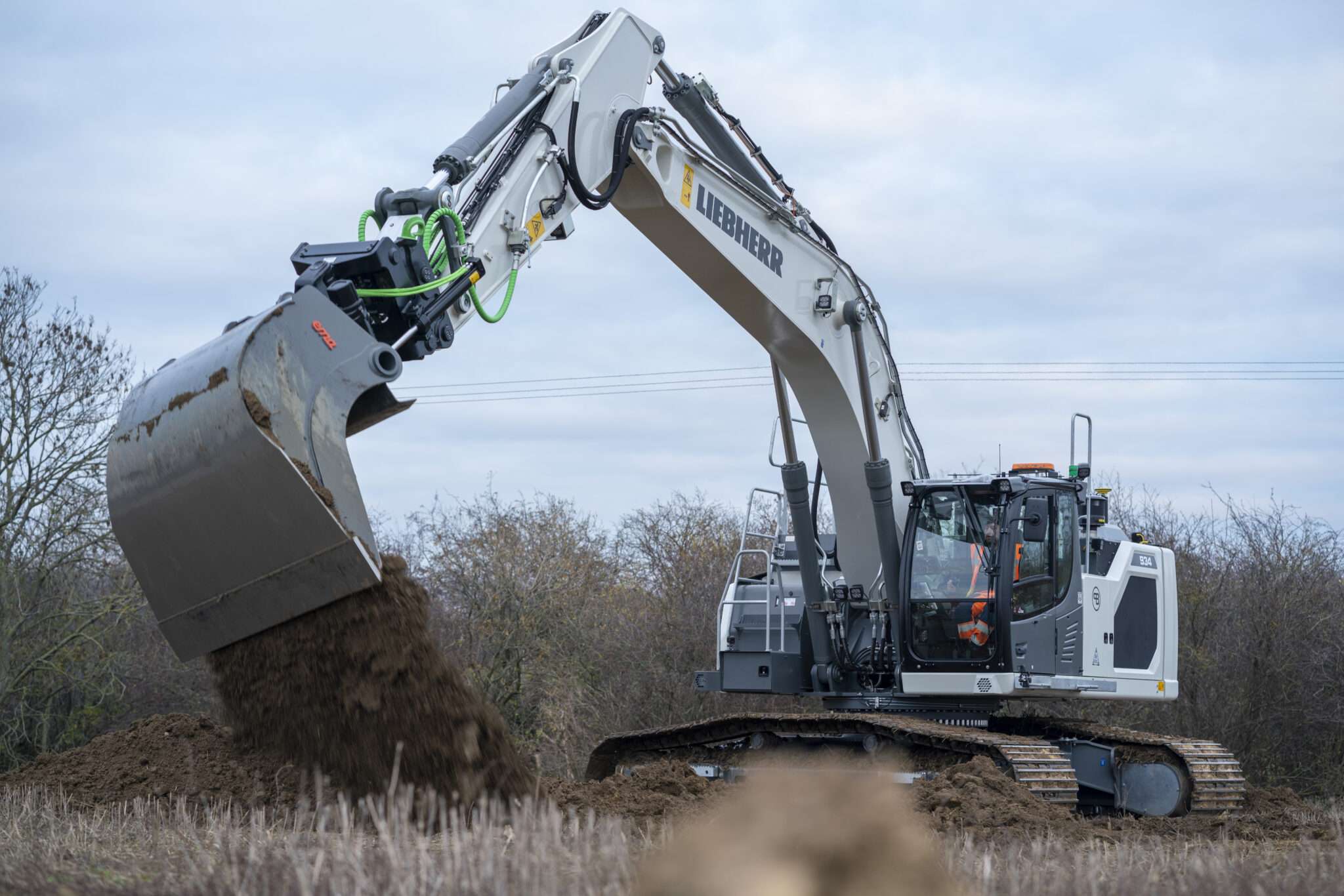 The use of machine guidance and latterly, machine control has recently taken another step forward in
the UK with the introduction of the world’s first Liebherr excavator with built-in Leica MC1 machine control interface.

The companies announced their collaboration at the start of 2020, just before the World found out about Covid-19 and its devastating effects. This all meant a delay in production with the first unit being delivered to the UK in November 2020.

The first recipient of a Liebherr/Leica excavator was Chesterfield based BradPave who specialise in civil engineering contracts around the UK. MD Paul Bradshaw has been a user of Liebherr equipment for several years running R 914 Compact excavators. “The build quality is impressive from Liebherr.” Paul explains “They are built to last, which is just what we need.” Paul runs a small but tight ship with just himself, son Blake and operator Liam Schofield on site. “I like to be on the job, making sure it runs smoothly, I don’t want to be spreading myself too thinly.” Paul explains “We go in as a team, do the job and move onto the next project.” Paul’s new Liebherr is his first large machine from the French plant situated on the outskirts of Colmar. The two R 914 Compacts have all been manufactured at Liebherr’s Kirchdorf plant over the border in Germany. The new R 934 G8 excavator replaces a slightly smaller machine from Case and takes the company’s use of GPS machine control to the next level.

“We have used a variety of GPS machine guidance for a number of years and the latest Leica MC-1 integrated into the Liebherr will be the icing on the cake as far as I’m concerned.” Paul comments “We use GPS on all of our projects as it makes us more accurate and therefore more productive. The more productive and accurate we are, the more profit we can make. It’s not a cheap solution, but once you have used it and benefited from it, you won’t go back.” This has been the same with Paul’s association with Steelwrist. This will now be the fourth machine with the market leading attachment on the end of the dipper. “We wouldn’t buy an excavator without a Steelwrist. It’s just as essential to our work as the machine control is.” Paul comments “Our latest 914 is carrying our original Steelwrist that we put on our first Liebherr. It has performed extremely well with very little in the way of issues, so we had it overhauled by Pat and his team to go on the new R 914 when that arrived last year.”
The latest Steelwrist is a bit of a one-off as it comes with larger 80mm pins, instead of the standard 70mm units and sits underneath a similar sized SQ hitch. The SQ hitch allows the rapid and safe exchange of hydraulic attachments without the operator having to leave the cab; another step to increased productivity from Paul.

The R 934 is one of the latest Generation 8 machines launched at Bauma in 2019. Models currently run from the 22t to 50 tonne class with a wide variety of specifications available in all models. BradPave’s R 934, from the outside is instantly noticeable with its mining white paint scheme, chosen to match the smaller R 914 Compact. Under the skin, the excavator is powered by Liebherr’s latest 4-cylinder, 8-litre diesel engine developing 272hp. For a machine in this weight bracket, many would have opted for a larger 6-cylinder powerplant but other G8 users report that the smaller engine still provides plenty of digging and lifting power whilst offering large fuel savings over the bigger engines.

The machine carries a 6.45m boom and 2.9m dipper but has been fitted with a slightly heavier 7.1t counterweight to balance out the additional weight of the Steelwrist. Not that the tilt rotator is overly heavy, it weighs less than 900kg even with the SQ fitting, Paul just wanted to ensure that at full stretch and cross-carriage,
the machine stays planted at all times.

The new G8 excavators not only have a very high standard specification including auto greaser and LED lights, but are available with a whole host of options, a lot of which Paul has chosen! Externally, a sturdy step with additional grab rails allows for easier access over the 800mm wide tracks into the cab. A large locker between the track frames has been fitted to store chains, shackles and dirty items and keeps them out of the cab or storage locker and a full suite of additional LED lights compliments the standard units with a fob operated light above the cab illuminating the way to and from the excavator in the darker hours.

Talking of the cab, Liam is very impressed with the standard of the Liebherr cab..

“I’ve only been in the 914 cab and found that to be a nice workplace. The 934 cab is even better thanks to its bigger size. The seat is so comfortable and easy to get into just the right position as are the joysticks.”

The cab on the new G8 machines is classed as totally dry with no hydraulic connections passing into the cab as on older machines. This has been designed to allow for a quieter working environment and also means there are less components situated within the structure meaning less work for engineers should any issues arise. Liam did say that the fully electric joysticks first felt a little strange but, as with anything, they quickly felt right. Paul has specified the Liebherr with an additional camera fixed to the dipper to allow a clear view into deep trenches and the screen, along with the large Leica MCP80 screen have been fitted above and below the new Liebherr colour touchscreen to Liam’s
right-hand side. “I didn’t want a cluttered cab with screens all over the place.” Paul said “We’ve been very thorough in fitting them so that it looks right, and Liam can see all three screens at a glance.

The Leica MC-1 machine control system has been completely integrated into the excavator whilst being built on the production line at Colmar. Working with Liebherr software, the system comes to the end-user ready to work with a standard machine. “As Paul was having the Steelwrist fitted, we had to reposition the tipping link sensor onto the hitch.” Mike James from Leica explained “Apart from this, the only thing we had to do was to calibrate the dimensions of the buckets Paul will use.” With the fitment of the tilt rotator, Leica has also installed their Co-Pilot system which allows the fully automatic operation of the Steelwrist in both tilt and rotate functions.

The first job for the new Liebherr was the development of a new distribution centre in Yorkshire for one of Paul’s regular clients. “We have worked with Core for a number of years delivering their civils packages.” Paul comments “They are a very good company to work with.” The job entailed the construction of a new access road and all of the associated drainage including a large swale and pond to deal with surface water on the site.

“We’ve used GPS guidance for a number of years and have found them to be a massive benefit to us and our customers on both the accuracy and productivity fronts.”  Paul said “There is a massive cost in equipping machines with these systems, but we find that cost disappears when you can confidently do the job accurately every time. The speed at which we can accomplish tasks now has increased too. It may look slow sometimes when it comes to finish grading or cutting a batter, but we know that we are within tolerance each and every time, we don’t need to revisit that job or use extra materials. For us, we wouldn’t be without it.”

Paul is also a convert to EMA attachments from Sweden. “We took some for the machine before the Liebherr and found them to be brilliant.” Paul comments “They are not the cheapest on the market, but you get what you pay for. They are light and stronger than anything else I’ve used in the past. Aaron is very good at looking after us with delivery and sourcing us almost any size or shape bucket, we need. I can’t recommend him highly enough.” Paul’s praise is obviously extended to Pat Bulcock and his team at Steelwrist UK who have now supplied him with three tilt rotators over the years. Paul goes on to say, “Pat is excellent! His service should be the one everyone looks at to benchmark themselves. Nothing is too much hassle.”