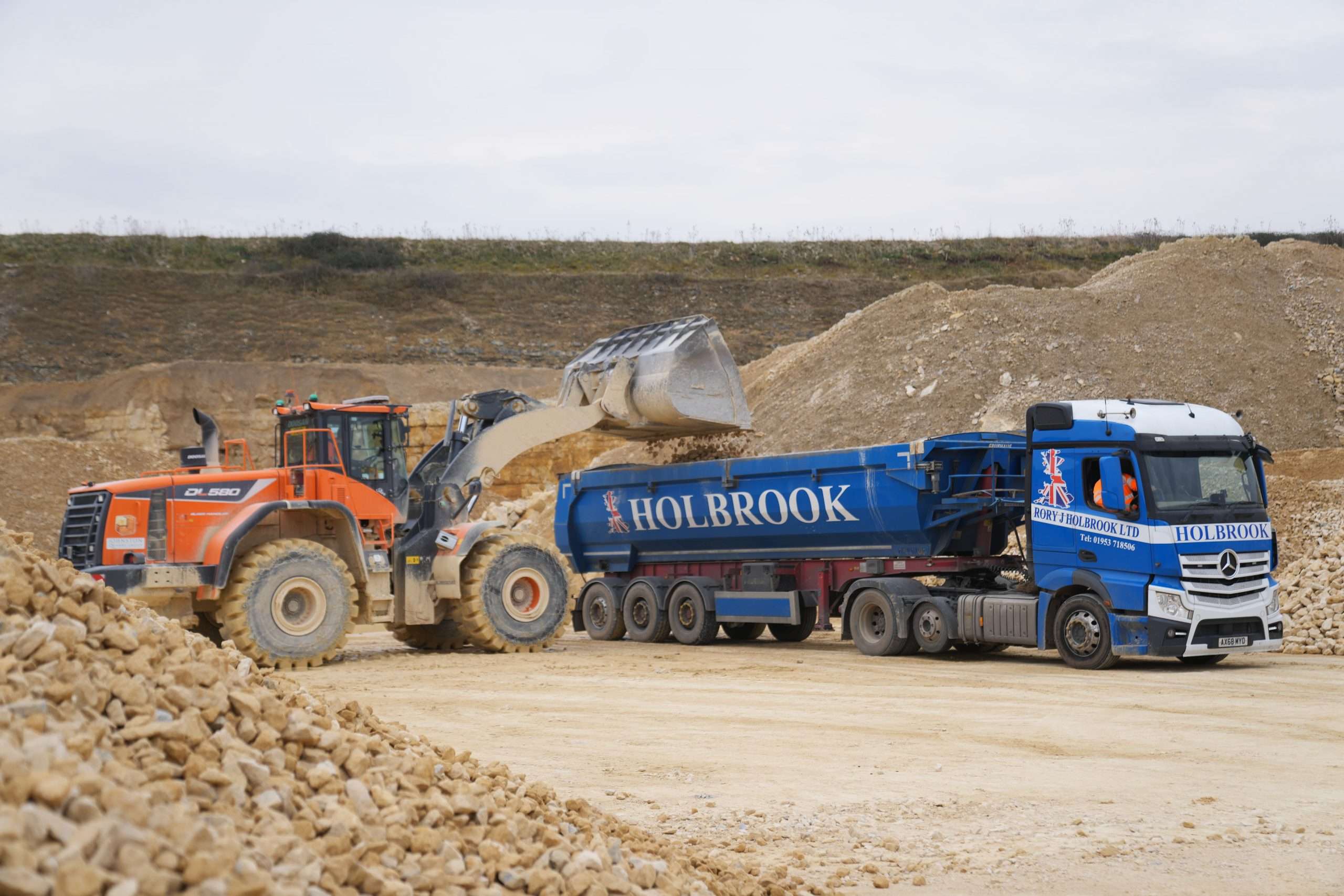 A specialist provider of material processing and handling equipment throughout the UK and Ireland, the Blue Group has enjoyed a long and successful working relationship with the Johnston Quarry Group, supplying it with a range of Powerscreen crushers and screeners, and Rammer breakers.

The Johnston Quarry Group operates eight quarries and two separate processing sites across the south of England.  Awesome Earthmovers recently travelled to Lincolnshire where two of the quarries are located – Creeton (just outside Grantham), and Rospley (near Boston). There, the Powerscreen crushers and screeners are earning their keep, along with a fleet of Doosan loaders and excavators.

Operationally, both quarries are virtually mirror images, as we learned from Quarry Manager Steve Johnson, who has more than 20 years experience in the industry.

The most recent acquisition from the Blue Group for the Creeton Quarry was the Powerscreen Chieftain 2200. It has a drive system that allows switching between 2 and 4 bearing with bolt-on parts. By splitting up into two individual boxes, the Chieftain 2200 is able to run aggressively without the constraints of a larger box. It also benefits from a quick set-up time, typically under 30 minutes.

Last year, the same quarry took delivery of the Powerscreen Premiertrak 600 Jaw Crusher from the Blue Group. Equipped with an advanced high-performance 1200mm x 820mm Terex chamber, the PT600 was chosen for its reliable and efficient performance, as was the Powerscreen 1000 Maxtrak Cone Crusher which was also supplied to the quarry in 2021.

These new additions from the Blue Group mean the quarry is capable of processing considerably more tonnages per hour.

Whilst processing operations at the quarry can change depending on requirements, a typical set-up is for stone from the quarry face to be loaded into the PT 600 Jaw Crusher, which reduces the material to 100mm.  The stone is then fed into one of the two Chieftain 2200 triple-deck screeners to remove the agricultural lime.  Further processing is carried out by the Powerscreen 1000 Maxtrak Cone Crusher before the final screening again by the second Chieftain 2200 triple-deck.  This process makes up to seven different products, including an agricultural lime, a 50mm clean, Type 1, 6C, 20mm, and 10mm Pipe Beddings as well as further quantities of agricultural lime dust. The end products are being used for a range of purposes from solar power installation works, highways works, construction sites, sports surfaces, driveways, or fill applications.

These new additions from the Blue Group mean the quarry is capable of processing considerably more tonnages per hour, which in turn means the operators, crushers, and screeners can work at their maximum capacity, allowing the quarry to reach its maximum output as efficiently as possible.

The Rammer hammers utilised by Johnston Quarry Group, models 3288 and 4099, are designed for primary breaking and make quick work of the Jurassic limestone. “These are some of our largest hammers, designed with a revolutionary operating principle that allows the hammer to be adjusted to match individual carriers and applications, improving hydraulic efficiency and safety”, says Rammer Marketing Specialist Julie Schilling.

The Rammer breakers used in the quarries were supplied by Murray Plant.  The breakers were acquired by the Blue Group three years ago and had been recently restructured, having grown significantly, taking on several new brands and product lines. As part of the Blue Group’s long-term growth strategy, it has been decided that all current product ranges sold by Murray Plant will now be supplied and serviced through three core regional businesses – Blue Southern, Blue Central, and Blue Scotland.

Blue Scotland is keeping the Murray Plant trading name, operating as ‘Murray Plant – A Blue Scotland Company’. However, both Blue Southern and Blue Central will continue to operate as usual under their current trading names, having acquired the attachment product lines which include Rammer, Allu, Fortress, and Xcentric.  Spare parts for all these brands will now be stocked at two dedicated Blue Spares facilities based in Warrington and Stirling.

Blue Area Sales Manager Ian Taylor, who covers both quarries in Lincolnshire, says the Johnston Group has been very good customers for many years, with Powerscreen crushers and screeners having also been acquired by the group’s other sites near Chipping Norton and at Sarsden, both in Oxfordshire.

Not surprisingly, perhaps, the successful growth of the group which has access to 86 million tonnes of freehold and leasehold reserves and resources giving it an average life of mine of over 40 years, caught the attention of SigmaRoc. It just recently acquired the group to extend its footprint in the UK and increase market coverage and will maintain JQG’s existing brands, management, manufacturing footprint, employees, and distribution network.

David Barrett, chairman of SigmaRoc, commented: “The Johnston Quarry Group fits the SigmaRoc model well and I believe the benefits gained will be mutual. As a Group, we have focused on building a portfolio of high-quality stand-alone businesses, to which we can add value through our improvement and integration efforts while maintaining those aspects of each which are unique and successful. We look forward to welcoming the JQG team to SigmaRoc and see significant potential to create value in this business over time.”